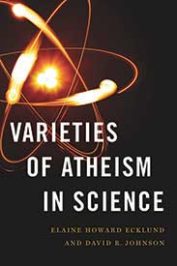 Varieties of Atheism in Science

Coping with a global pandemic has laid bare the need for public trust in science. And there is good news and bad news when it comes to how likely the public is to trust science. Our work over the past ten years reveals that the public trusts science and that religious people seem to trust science as much as non-religious people. Yet, public trust in scientists as a people group is eroding in dangerous ways. And for certain groups who are particularly unlikely to trust scientists, the belief that all scientists are loud, anti-religious atheists is a part of their distrust. Our research with atheist scientists in the US and UK shows that atheist scientists are radically different than the loudest voices would lead us to believe.

A small but vocal subset of atheist scientists (think Richard Dawkins, author of The God Delusion) speak derisively about religion and give the false impression that most scientists are anti-religious. It is thus no surprise that many religious individuals believe scientists are anti-religion. (Furthermore, given that women and communities of color are more likely to be religious than white men—who predominate in science—it is unsurprising that the scientific community struggles to recruit and retain individuals from such backgrounds). Our data, however, turn the notion of hostile atheists on its head. After surveying 1,293 atheist scientists at universities and research institutes in the US and the UK, and conducting 81 in-depth interviews with survey participants, we identified three groups of atheist scientists. To be sure, we did encounter some anti-religion sentiment among one group we refer to as modernist atheists. These are scientists who are not part of religious institutions and believe there is no way of knowing outside of science. A subset of modernist atheists are concerned about religion’s potential impact on the promotion of cognitive rationality in society. And more than two-thirds do view the relationship between science and religion as one of conflict. But conflict does not necessarily entail personal hostility. Indeed, many modernist scientists espoused positive views of religion’s role in society and rejected the discourse of vocal anti-religious atheists as hyperbolic and damaging to science.

A third group, spiritual atheists, we label as such because they construct alternative value systems—oriented around the transcendent—but without belief in God or religious affiliation. For these scientists (again, less than 40% of whom embrace the conflict perspective), spirituality often imbues wonder and motivates their work. Spiritual atheist scientists rarely espouse negative views of religion, perhaps in part because they see limits to what science can explain and appreciate that both religious and non-religious forms of understanding can inform ethics, morals, and other non-material dimensions of the world.

These patterns, coupled with our previous work that demonstrates that more scientists are religious than most people think, indicate that most scientists—even atheist scientists—are not hostile to religion. They also suggest that science may have a marketing problem. By one logic, the public sphere entails a marketplace of ideas where multiple views of an issue can be presented for debate. At present, a small but vocal group of anti-religion atheist scientists maintains a monopoly over discourse related to science and religion. Unless a broader variety of both atheist and religious scientists begin to contribute to such conversations, the erosion of trust in scientists is unlikely to change.

Elaine Howard Ecklund is the Herbert S. Autrey Chair in Social Sciences, Professor of Sociology, and director of the Religion and Public Life Program at Rice University. She is the author of over 100 research articles and six books, including Science vs. Religion: What Scientists Really Think and (with Christopher P. Scheitle) Religion vs. Science: What Religious People Really Think.

David R. Johnson is Associate Professor of Educational Policy Studies at Georgia State University. He is the author of A Fractured Profession: Commercialism and Conflict in Academic Science and co-author (with Elaine Howard Ecklund) of Secularity and Science: What Scientists Around the World Really Think About Religion.