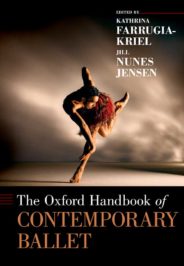 The Oxford Handbook of Contemporary Ballet

From its origins in the Renaissance, ballet has evolved in various distinct ways, with different schools around the globe incorporating their own cultures. As a widespread and highly technical form of dance, ballet has been influential globally and forms the foundations of many other dance genres.

Explore some of our recent titles that look at the history (and future) of ballet, consider some of its influential figures, and the role it played in Cold War cultural diplomacy.

Compared to existing histories of ballet, The Oxford Handbook of Contemporary Ballet prioritizes connections between ballet communities as it interweaves chapters by scholars, critics, choreographers, and working professional dancers. The book looks at the many ways ballet functions as a global practice in the 21st century, providing new perspectives on ballet’s past, present, and future.

Ruth Page: The Woman in the Work by Joellen A. Meglin

In Ruth Page, the Chicago ballerina emerges as a highly original choreographer who, in her art, sought the iconoclastic as she transgressed boundaries of genre, gender, race, class, and sexuality. Author Joellen A. Meglin shows how Page’s works were often controversial and sometimes censored even as she succeeded in roles usually reserved for men in the ballet world: choreographer, artistic director, and impresario.

Read Ruth Page: The Woman in the Work

One Dead at the Paris Opera Ballet: La Source 1866-2014 by Felicia McCarren

One Dead at the Paris Opera Ballet takes readers to four historic performances, over 150 years, showing how—through the sacrifice of a feminized Nature—the ballet La Source represented the biopolitics of sex and race, and the cosmopolitics of human and natural resources. This recent addition to the Oxford Studies in Dance Theory series includes new archival research from the Paris Opera Ballet and offers perspectives from cultural history, biopolitics and gender performativity, as well as cosmopolitical eco-criticism.

Surveying the state of American ballet in a 1913 issue of McClure’s Magazine, author Willa Cather reported that few girls expressed any interest in taking ballet class and that those who did were hard-pressed to find anything other than dingy studios and imperious teachers. One hundred years later, ballet is everywhere. Ballet Class explores the growth of ballet from an ancillary part of 19th century musical theatre, opera, and vaudeville to the quintessential extracurricular activity it is today, pursued by countless children and an integral part of 20th century American childhood across borders of gender, class, race, and sexuality.

Catherine Littlefield: A Life in Dance by Sharon Skeel

While she is best remembered today as founder of the Philadelphia Ballet and the director and driving force behind the famous Littlefield School of Ballet, from which Balanchine drew the nucleus for his School of American Ballet, Catherine Littlefield (1905-51) and her oeuvre were in many ways emblematic of the full representation of dance throughout entertainments of the first half of the 20th century. From her early work as a teenager dancing for Florenz Ziegfeld to her later work in choreographing extravagant ice-skating shows, Littlefield was amongst the first choreographers to bring concert dance to broader venues, and her legacy lives on today in her enduring influence on generations of American ballet dancers.

Ballet in the Cold War: A Soviet-American Exchange by Anne Searcy

In 1959, the Bolshoi Ballet arrived in New York for its first ever performances in the United States. The tour was part of the Soviet-American cultural exchange, arranged by the governments of the US and USSR as part of their Cold War strategies. The tours created space for genuine appreciation of foreign ballet but also led to a series of deep misunderstandings. Drawing on both Russian- and English-language archival sources, Ballet in the Cold War demonstrates that the separation between Soviet and American ballet lies less in how the ballets look and sound, and more in the ways that Soviet and American viewers were trained to see and hear. It suggests new ways to understand both Cold War cultural diplomacy and 20th century ballet.

Read Ballet in the Cold War: A Soviet-American Exchange

The Fascist Turn in the Dance of Serge Lifar: Interwar French Ballet and the German Occupation by Mark Franko

Ukrainian dancer and choreographer Serge Lifar (1905-86) is recognized both as the modernizer of French ballet in the twentieth century and as the keeper of the flame of the classical tradition upon which the glory of French ballet was founded. The Fascist Turn in the Dance of Serge Lifar is the first book not only to discuss the resistance to Lifar in the French press at the start of his much-mythologized career, but also the first to present substantial evidence of Lifar’s collaborationism and relate it to his artistic profile during the preceding decade.

Read The Fascist Turn in the Dance of Serge Lifar: Interwar French Ballet and the German Occupation

This post was written by the OUP Music team.

Have you heard of René Blum?