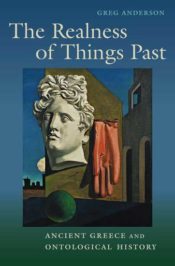 The Realness of Things Past: Ancient Greece and Ontological History

In the modern West, we take it for granted that reality is an objectively knowable material world. From a young age, we are taught to visualize it as a vast abstract space full of free-standing objects that all obey timeless universal laws of science and nature. But a very different picture of reality is now emerging from new currents of thought in fields like history, anthropology, and sociology.

The most powerful of these currents suggests that reality may not be singular at all, but inherently plural. Far from being an eternally fixed material order, it is better seen as a complex historically variable effect, one that is produced whenever human communities regularize their life-sustaining interactions with the fabrics of the planet. In short, humans have always lived in a “pluriverse” of many different worlds, not in a universe of just one.

Far-fetched as this idea might seem at first sight, it can be supported by a number of compelling arguments.

First, on purely historical grounds, it is clear enough that billions of humans have thrived in the past without knowing anything at all of our objective material reality or its timeless laws of being. Countless non-modern peoples, from ancient Egyptians to Indigenous Amazonians, have sustained themselves successfully for hundreds if not thousands of years, despite staking their lives on very different realities, on worlds full of gods, ancestral spirits, magical forces, and so many other things which our science would deem unreal. Did they all just get lucky?

Second, on ecological grounds, one could point out that our own modern reality normalizes a human-centered individualist way of life which has imperiled the whole future of the planet in just a few hundred years. On specifically humanitarian grounds, one could add that this same modern way of life has precipitated innumerable other horrors along the way, from colonialist genocides, chattel slavery, and systemic racism to two world wars and the Holocaust. If, as we like to believe, this scientifically grounded order is aligned with life’s ultimate truths, how come it has diminished and destroyed so much life in its brief history?

Then there is the philosophical argument, which can only be briefly summarized here. The very idea of an objectively knowable world has been questioned by influential thinkers for more than a hundred years. Many critics would now claim that the most essential contents of any reality are relations not things. All phenomena, whether human or non-human, material or immaterial, are effectively made of the relations with all the other phenomena on which their existence depends. Hence, it is impossible for any humans to know a world objectively, as something separate from or external to themselves, because they are always inextricably entangled in the relations that make up that world. They can only know reality from a particular location in time and space, wherever they happen to be entangled, whether it be ancient Egypt, the Amazonian rainforest, or modern Europe. And if so, no lived historical reality will ever be more universally or absolutely real than any other.

These three arguments for a pluriverse in turn encourage a fourth, which is ethical in nature. If humans have successfully inhabited numberless different realities, none of them more ultimately real than any other, then all established human communities should be free to pursue their own ways of life in worlds of their own choosing. This ethical imperative would necessarily rule out all forms of imperialism and colonialism. And it would expressly support the larger cause of “decolonization,” especially the efforts of Indigenous and other subaltern peoples to maintain or revitalize their own local ecologies in their own ancestral worlds of experience.

Needless to say, this pluriverse idea has profound and far-reaching implications for our understanding of the whole human story.

From a pluriversal perspective, the past would no longer look like a kind of extended overture to the present, where all humans inhabit the same world and struggle along a common path of “progress” towards western modernity. Instead, it would look like a vast panorama of autonomous worlds, where life was secured by a wondrous array of relations, beings, and forces that defy our narrow technoscientific imaginations.

As a result, the modern present would no longer look like the culmination of some grand story about the “triumph” of a “western civilization.” It would instead look like a bizarrely self-defeating historical anomaly, a world that has inflicted more catastrophic damage on planetary life than any other in just a few centuries.

Then again, a pluriversal perspective would dramatically broaden our horizons of possibility as we face the future and try to imagine more humane, more ecologically responsible modes of life. As ancient Egyptians, Indigenous Amazonians, and innumerable other non-modern peoples have shown us, it is entirely possible to pursue less harmful ways of being human in worlds very different from our own.

Greg Anderson holds degrees from the Newcastle and London Universities in his native UK and a PhD from Yale. He is currently Professor of History at Ohio State University, where he has taught since 2005. His primary research areas are ancient Greek history, historical thought, and critical theory.