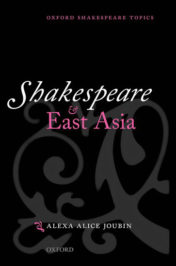 In 1930, English novelist Evelyn Waugh entertained the prospect of Chinese-American actress Anna May Wong playing Ophelia, Hamlet’s love interest: “I should like to see Miss Wong playing Shakespeare. Why not a Chinese Ophelia? It seems to me that Miss Wong has exactly those attributes which one most requires of Shakespearean heroines.” Waugh went on to say that “I cannot see her as Lady Macbeth, but she seems to me perfectly suited for the role of Juliet or to any of the heroines of the comedies” (The Daily Mail 24 May 1930).

There has always been some perceived affinity between the submissive Ophelia and East Asian women. Ophelia is a paradox in world literature. Even when she appears to depend on others for her thoughts like her Western counterpart, the Ophelias in Asian adaptations adopt some rhetorical strategies to make themselves heard, balancing between eloquence and silence, shattering the stereotypes about docile Asian women.

Gender roles in Shakespeare’s plays take on new meanings when they are embodied by Asian actors. For instance, inspired by feminist voices, several South Korean adaptations of Hamlet recast Ophelia as a shaman who serves as a medium to console the dead and guide the living. Because female shamans exist outside the Confucian social structure, they have greater agency. In some instances, a shamanistic Ophelia figure frames the entire play.

In some productions, Ophelia appears as a ghost. Jo Kwang-hwa’s play, Ophelia: Sister, Come to My Bed (1995), opens with Ophelia’s funeral. Ophelia is caught between the incestuous love of Laertes and the romantic love of Hamlet. Eventually, she is abandoned by both men: Laertes has no future with her, and Hamlet must carry out his revenge mission. Possessed by the dead king’s spirit, Ophelia conveys the story of his murder and urges Hamlet to avenge his death. When the ghost of Old Hamlet appears in the form of a large puppet operated by three monks, Ophelia moves in unison with the ghost and changes her voice to that of an old man. The effect is unsettling.

In other instances, Ophelia has more moral agency. In Feng Xiaogang’s martial arts film The Banquet (2006) Qing Nü, unlike Shakespeare’s Ophelia, is able to express her thoughts without going mad or resorting to singing as her only form of communication. Qing Nü is not drowned in the end, although she is still associated closely with water. Her songs allude to rivers and boating, and her intimate scenes with Hamlet often involve rain. An example of the water symbolism is a scene in a rainy courtyard where Qing Nü washes the prince’s hair as the prince looks up at the falling rain drops. As a symbol of innocence in a court of violence and intrigue, Qing Nü occupies the moral high ground. Significantly for a martial arts film, Qing Nü is the only character who is not versed in swordsmanship. Qing Nü publicly expresses her love for the prince. Her passions are uncensored and her reason is simple: she wants to accompany the prince so he will not be lonely. Unlike Shakespeare’s Ophelia, Qing Nü does not have to go mad or speak allusively to express herself.

“Reflecting the idea that strength and empowerment can take many forms, these performances counter the racialized myths about Asian women”

Not all performances of Ophelia involve female empowerment. Some productions use her fate to highlight a history of oppression. Ophelia gives away some dolls in the Japanese director Yukio Ninagawa’s Hamlet (Barbican, London, May 2015). The production featured a gigantic, tiered hina-dolls display. Actors became human-sized dolls in the play-within-a-play scene. The set is inspired by the Japanese Girls’ Day or Dolls’ Day, a festival celebrating girls’ development and well wishes for their future. Since the dolls represent hope, Ophelia’s giving away dolls rather than flowers in her mad scene carried with it a grave tone, playing as a disruption to established rituals. Dolls adrift was a metaphor for Ophelia’s drowning and evoked the eleventh-century Genji-Monogatari. The floating-doll ritual is still performed by Kamigamo and Shimogamo Shrines in Kyoto. In some instances, the previous year’s dolls are brought to the shrines to be burned. Ophelia’s life-sized dolls drew attention to the artificiality of rituals and the performance.

Reflecting the idea that strength and empowerment can take many forms, these performances counter the racialized myths about Asian women that have led to the fetishization of Asian women as subservient and dainty objects. The fetish makes Asian women interchangeable. East Asian women are seen as erotic because they are perceived to be exotic in physique and manners. While her songs still occupy the center of attention, Ophelia does not tend to stand in for lost girlhood or female madness in East Asia. The strands of girl power and fragile girlhood coexist as Asian Ophelias lay claim to their moral agency by thinking and acting on their own behalf.

Feature image by Flybynight from Pixabay

Joubin is the author of Shakespeare and East Asia (Oxford, 2021).