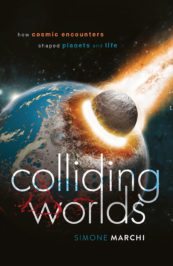 We earthlings enjoy the spectacle of shooting stars: small fragments of asteroids and comets that burn in sudden flashes upon entry in the Earth’s atmosphere. The largest of these fragments pose a limited threat to us as their mid-air blasts can produce local damage to buildings and infrastructures. Larger events are increasingly rarer, but their consequences can be devastating on a global scale. Fortunately, we do not have first-hand experience of such events, but the extinction of the dinosaurs by a collision with a 10-km asteroid about 66 million years ago is etched in our imagination. Planetary scientists are finding immense cosmic collisions were common during Earth’s first billion years. Compared to the most energetic of these early events, the dinosaur-killing collision was a modest firecracker.

At the dawn of the Solar System, about 4.6 billion years ago, collisions were responsible for the growth of the Earth and the formation of the Moon; later, they modulated Earth’s evolution by enriching the chemistry of its atmosphere and oceans. New worlds emerged from the upheaval of cosmic catastrophes, and our planet as we know it today may be the result of random events that occurred billions of years ago. The planet could have followed innumerable other paths, in unpredictable directions; a multitude of possible Earths could have emerged from the clamour of early collisions. And all the while Earth was reshaped by these events, life was taking a toehold on our planet, some 4 to 3.5 billion years ago. Contrary to common sense, cosmic collisions are not all about destruction and death. It appears entirely possible that collisions could have been beneficial to the development of conditions suitable for the formation of first organisms—our distant relatives—on Earth. What do we know about these early cosmic catastrophes?

The research of these distant events faces innumerable challenges. We estimate the Earth was fully formed by 4.5 billion years ago, and yet its surface rocks are much younger. There are only a few scattered localities exposing rocks older than 3 billion years, and the oldest known terrestrial rocks date back about 4 billion years. Scientists—it may seem—are subject to an unfair punishment suitable for Dante’s Inferno: the most accessible planet to study in the Universe, our Earth, has erased its early history. But not all is lost. Clues of ancient collisions can be found elsewhere in the Solar System, pretty much everywhere we look. Scars of collisions are visible in impact craters found on nearly any solid surface in the Solar System, from our Moon to asteroids and other planets. Mars’ barren surface, for instance, is sculpted by countless impact craters, some of which may have hosted ancient lakes. Small pieces of extraterrestrial rocks that serendipitously land on Earth—called meteorites—also record catastrophic collisions that have shuttered their progenitor asteroids at the dawn of the Solar System.

Should we surmise the Earth experienced similar cosmic catastrophes in its wild years? Certainly. Scientists are able to trace the flow of key atoms in a restless Earth to reveal traces of ancient collisions. Among the various elements, there are a few such as gold and platinum that exhibit a strong affinity with iron, and they are aptly known as highly iron-loving elements. So, we can expect that the Earth’s mantle and crust should be strongly depleted in these highly iron-loving elements, as they would have followed the fate of most of the Earth’s iron, which sank to the core during the early stages of the planet’s formation. Yet we find these elements in the Earth’s crust. Why? While several theories have been put forth, the most likely explanation is that they were delivered by ancient cosmic collisions. It is a rather intriguing thought that the gold ring I wear while typing these words may not have existed without ancient cosmic collisions!

We still do not know the number and magnitude of these ancient collisions, nor their consequences for the nascent Earth, but it is estimated that some of the largest bodies may have been up to 3000 km in diameter. One such collision would have been large enough to wipe out the whole Earth’s surface within hours, either by direct disruption of the impact or by fall back of molten rocks spread in orbit by the energy of the event. It does appear inevitable that during the Earth’s wild years, the first billion years or so, collisions were capable of forever transforming surface environments, and with them, the earliest forms of life. How much do we humans owe to these distant events? What form of life, if any, would have spurred on our planet without these random events? These questions underline the fascinating story behind the creative disruption of ancient cosmic collisions.

Dr Simone Marchi is a Principal Scientist at Southwest Research in Boulder, Colorado. His interests cover the formation and geology of the terrestrial planets, the Moon, and asteroids. He is Deputy Project scientist for the NASA Lucy mission, and Co-Investigator of the NASA Psyche mission, NASA Dawn mission, and ESA BepiColombo. He is a member of the science teams of the ESA JUICE and Rosetta missions. Marchi won the international Farinella Prize and NASA's Susan Mahan Neibur Early Career Award for his studies of the impact histories of terrestrial planets and asteroids and early evolution of the Solar System. He is also the recipient of several NASA and ESA mission group achievement awards, and has an asteroid named after him by the International Astronomical Union: Asteroid 72543 Simonemarchi. His work is regularly featured on the news.