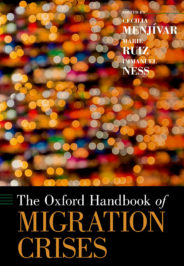 The Oxford Handbook of Migration Crises

Once again, we are exposed to daily doses of “border crisis” news complete with photos of Central American children attempting to cross the southern US border without their parents. Other media images depict adult women or men cradling children or holding their little hands as the parents anxiously wait to at least be able to present their cases for asylum to US officials. Headlines accompanying these images cite “soaring numbers” of children crossing at an all-time high. And they claim to explain this “surge,” discussing how this new border crisis may exceed the government’s capacity to care for them and ultimately thwart President Biden’s plans for immigration reform.

Calling the groups of immigrants arriving at the Southern border a crisis has become an easy shorthand with sensationalist overtones. It provokes reactions across the range of political opinions, as well as among government officials and civil society actors alike. But is there really a crisis at the border? Or is this crisis located elsewhere? And whose crisis is it?

First is the issue of whether the numbers we see today constitute an actual, statistically significant spike over previous years. A question about definitions used in collecting official statistics is important to keep in mind, as such definitions change over the years to the point where we might be comparing apples and oranges when we assess the number of immigrants arriving at the border from year to year. Although the approximately 15,000 unaccompanied minors who border authorities encountered in the first two months of 2021 seems much higher than the 12,758 apprehensions during the same period in 2019, a semantic difference may partially account for the uptick: whereas the Department of Homeland Security classified the figures in 2019 as “apprehensions,” the numbers in 2021 were of “encounters.” Because asylum seekers are now often sent back across the border without being detained, the same person might try to cross again in a short period and be re-encountered, meaning they appear more than once in the newly-defined statistic.

Even if we put aside the lack of clarity in these statistics, we must also contextualize the numbers and any apparent increase. Importantly, unaccompanied minors are still only a fraction of the total number of 180,000 “encounters” recorded in the first months of 2021. And the total number of migrants “encountered” is much smaller than that registered in 2000, when apprehensions were at the all-time high of over one million annually for several consecutive years. Panic over a border crisis and its consequences begins to dissipate when empirical evidence enters the discussion.

“Panic over a border crisis and its consequences begins to dissipate when empirical evidence enters the discussion.”

To the extent that there are migration-related crises, these are located elsewhere and have been created over decades by government policies in which the United States has played a critical role. Policies that have thoroughly militarized the US southern border through various “operations” date back to the 1950s but have expanded and multiplied from the 1980s and grown astronomically since the 1990s. Parallel approaches in Central America, instigated by the US government, have wholly militarized the countries where many immigrants originate, historically and contemporaneously. In recent years, US-sponsored militarization strategies have extended to cover the entire migration corridor through Mexico, making Mexico a “vertical border.” This tripartite militarization strategy—at origin, transit, and destination—has created some of the most violent country conditions in the world from which Central Americans flee today, harrowing journeys by land through Mexico, and one of the most heavily armed borders in the world that pushes migrants onto inhospitable desert terrain where many have perished. The multi-sited militarization approach constitutes a veritable crisis in need of overhauling: it has generated more violence and produced more deaths, disappearances, and suffering than most natural disasters in the Central American region.

Thus, we are left with images of a border crisis that do not hold up in the face of empirical evidence and with veritable crises that cause infinitely more harm yet go ignored by the media and policy makers. Migration crises are mostly constructed through policy, such as the Trump administration’s Title 42, which largely suspended the right to seek asylum in the United States, and which pushed asylum seekers to remain in Mexico indefinitely. Thus, real migration crises originate in policy decisions made in wealthy nations that historically have actively repelled, not welcomed, asylum seekers in need of protection.

Cecilia Menjívar is co-editor of The Oxford Handbook of Migration Crises. She holds the Dorothy L. Meier Endowed Chair at UCLA, where she is a Professor of Sociology. Her research focuses on the role of the state in creating liminal legal statuses and immigrants' experiences of vulnerable legal statuses. Empirically, she focuses on Central American migration to the United States.