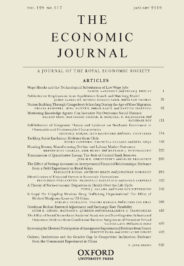 The Economic Journal is one of the founding journals of modern economics. Since 1891 the journal has provided a platform for high-quality, imaginative economic research, earning a worldwide reputation for excellence as a general interest journal, publishing papers in all fields of economics for a broad international readership.

Son preference is a phenomenon that has strong historical roots in many western and non-western cultures. It manifests in various forms, ranging from parents investing more time and resources in their sons than their daughters to the dynastic concepts of patrilineal succession. Naturally, such gender preference can have various social and cultural origins, however one of the most common motifs underlying its existence is the unequal position of men and women in the society.

The inequality of men and women is a tenacious problem, and most of the modern history has been characterized by the fight against it. And while this fight is far from over, we are seeing signs of improvements: people’s gender role beliefs are becoming less traditional, the gender wage gap is narrowing, and the single-earner model of household is being replaced by the two-earner model.

All these factors suggest that the positions of men and women in modern societies are becoming more aligned. In this context, it is natural to ask whether son preference is yet another social phenomenon that is losing its historical ground. Could it even be that in some domains of life such preference is already a thing of the past?

Social scientists have been investigating son preference in modern societies using many statistical techniques. The most common analyses are based on population-level fertility data. For example, by comparing the annual numbers of newborn boys to newborn girls, researchers can capture the extent of the most extreme expression of son preference: selective abortion or infanticide of female offspring (which are still common in India and China).

In western countries, the influence of son preference on fertility is generally thought to be more nuanced, not affecting the genders of children born into a family, but rather their numbers. Historically, parents of girls have been observed to have more children than parents of boys. This association (commonly found in the data covering the second half of the 20th century) has been interpreted as a sign of son preference, since the parents were more likely to try for an additional child if there was no son in the family.

However, new evidence suggests that fertility patterns are changing. Recent study using data from the 2008-13 US Census concluded that there is little evidence of a lasting son preference on fertility in the United States. In fact, the study has shown that the association has flipped: parents of girls now have fewer children than parents of boys. In our research using the Dutch population data, we find exactly the same pattern. This suggests that couples in the West now exhibit a slight daughter preference in terms of their childbearing decisions.

The existence of son preference has been also commonly inferred from marriage and divorce data. In the United States, parents of boys have been found more likely to legitimize their children by marriage, and less likely to divorce than parents of girls. While the magnitudes of these differences are generally quite small, they too have been interpreted as signs of son preference (with the conventional narrative being that fathers of sons are less likely to leave the family).

But also in this domain, the evidence is becoming somewhat dated. The majority of studies base their findings on data corresponding to the middle or second half of the 20th century, which leaves the preferences of modern families relatively unexplored. Using more recent marriage and divorce data from the Netherlands, we did not find any evidence of lasting son preference on marriage and divorce decisions. Parents of girls were just as likely to legitimize their children by marriage as parents of boys, and while we did find parents of boys less likely to divorce than parents of girls, further analyses revealed that this finding is unlikely to be explained by son preference. This is because the effect proved to be highly age-specific, manifesting only in the teenage period of the child’s life. If parents were indeed getting divorced because of fathers’ latent son preference, they would not wait 13 years before doing so. We would be much more likely to see divorce disparities with respect to children’s genders throughout children’s lives.

While these findings challenge the conventional narrative of son preference in the modern western societies, it needs to be acknowledged that son preference remains a major social force in many non-western countries. Particularly worrying are the male-biased sex ratios at birth (SRB) in China and India, which are generally regarded to be a consequence of sex-selective birth control practices. These demographic distortions of large populations are likely to have far-reaching socio-economic consequences, many of which are yet to be fully realized or even understood.

It is worth noting that the gender bias of the Chinese SRB has peaked around 2008, and it has been steadily declining from this point onwards. And while the ratio remains biased even today, it is likely that the gradual relaxing of Chinese fertility-control policies and the coinciding changes of gender role beliefs will lead to further improvements in the future as well. In contrast, the gender bias of Indian SRB has remained more persistent, exhibiting no clear trend over the last 20 years.

Nevertheless, if the western experience is of any indication, son preference is a phenomenon that is malleable to culture change. With the improving position of women in societies around the world, we are likely to see the son preferences slowly fading away, eventually disappearing completely. In fact, based on the observed fertility patterns in the western countries, it will be interesting to see whether future families will reinforce their preferences for daughters, and what will be the eventual consequences for this nascent phenomenon.

Jan Kabátek is an applied family and labor economist at the University of Melbourne. Alongside David C Ribar, Kabátek recently published "Daughters and Divorce" in The Economic Journal.

A new generation wrestles with the gender structure