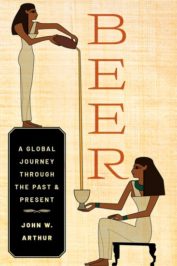 Beer: A Global Journey through the Past and Present

A fascinating exploration of beer, ancient and contemporary, and its role in shaping human society.

Beer is one of the world’s oldest produced alcoholic beverages and since its invention some 13,000 years ago, people across the globe have been brewing, consuming, and even worshiping this amber nectar. Whether you prefer a pale ale, wheat beer, stout, or lager, from the cask or a humble bottle, beer enthusiasts can agree that the topic of beer is as complex as its taste.

In celebration of National Beer Day, discover a refreshing selection of titles that explore the social and historical influence of ale, from ancient brewing to the modern craft beer industry.

Beer: A Global Journey through the Past and Present by John W. Arthur

In Beer, archaeologist John W. Arthur takes readers on an exciting global journey to explore the origins, development, and recipes of ancient beer. This unique book focuses on past and present non-industrial beers, highlighting their significance in peoples’ lives. As this book amply illustrates, beer has shaped our world in remarkable ways for the past 13,000 years.

In Praise of Beer by Charles W. Bamforth

Smashing the Liquor Machine: A Global History of Prohibition by Mark Lawrence Schrad

This is the history of temperance and prohibition as you’ve never read it before: redefining temperance as a progressive, global, pro-justice movement that affected virtually every significant world leader from the eighteenth through early twentieth centuries. Unlike many traditional “dry” histories, Smashing the Liquor Machine gives voice to minority and subaltern figures who resisted the global liquor industry, and further highlights that the impulses that led to the temperance movement were far more progressive and variegated than American readers have been led to believe.

The first major reference work to investigate the history and vast scope of beer, featuring more than 1,100 A-Z entries written by 166 of the world’s most prominent beer experts. Edited by Garrett Oliver, the James Beard Winner for Outstanding Wine, Beer, or Spirits Professional, this is an indispensable volume for everyone who loves beer as well as all beverage professionals, including home brewers, restaurateurs, journalists, cooking school instructors, beer importers, distributors, and retailers.

Beeronomics: How Beer Explains the World by Johan Swinnen and Devin Briski

From prompting a transition from hunter-gatherer, to an agrarian lifestyle in ancient Mesopotamia, to bankrolling Britain’s imperialist conquests, strategic taxation and the regulation of beer has played a pivotal role throughout history. Beeronomics: How Beer Explains the World tells these stories, and many others, whilst also exploring the key innovations that propelled the industrialization and consolidation of the beer market.

The Economics of Beer Edited by Johan F.M. Swinnen

This book provides a comprehensive and unique set of economic research and analysis on the economics of beer and brewing, exploring the economic history of beer, from monasteries in the early Middle Ages to the recent “microbrewery movement.” It considers important questions, such as whether people drink more beer during recessions, the effect of television on local breweries, and what makes a country a “beer drinking” nation.

Voices of Guinness: An Oral History of the Park Royal Brewery by Tim Strangleman

In this book, Tim Strangleman tells the story of the Guinness brewery at Park Royal, showing how the history of one of the world’s most famous breweries tells us a much wider story about changing attitudes and understandings about work and the organization in the twentieth and early twenty-first centuries. Drawing on extensive oral history interviews with staff and management as well as a wealth of archival and photographic sources, the book shows how progressive ideas of workplace citizenship came into conflict with the pressure to adapt to new expectations about work and its organization.

Throughout their histories Artois, Piedboeuf, and their successor companies have kept a controlling family ownership. This book provides a unique insight into the complex history of these three family breweries and their path to becoming a prominent global company, and the growth and consolidation of the beer market through the nineteenth and twentieth centuries.

New Developments in the Brewing Industry: The Role of Institutions and Ownership Edited by Erik Strøjer Madsen, Jens Gammelgaard, and Bersant Hobdari

Institutions and ownership play a central role in the transformation and development of the beer market and brewing industry. This book explores the implications of this dynamic for the breweries, discussing how changes in institutions have contributed to the restructuring of the industry and the ways in which breweries have responded, including a craft beer revolution with a surge in demand of special flowered hops, a globalization strategy from the macro breweries, outsourcing by contract brewing, and knowledge exchange for small-sized breweries.

The Rise of Yeast: How the Sugar Fungus Shaped Civilization by Nicholas P. Money

Yeast is responsible for fermenting our alcohol and providing us with bread—the very staples of life. In The Rise of Yeast, Nicholas P. Money argues that we cannot ascribe too much importance to yeast, and that its discovery and controlled use profoundly altered human history. A compelling blend of science, history, and sociology The Rise of Yeast explores the rich, strange, and utterly symbiotic relationship between people and yeast, a stunning and immensely readable account that takes us back to the roots of human history.

The fungus that’s worth $900 billion a year