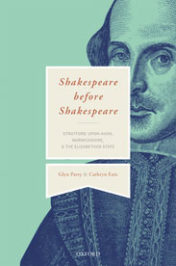 Shakespeare Before Shakespeare: Stratford-upon-Avon, Warwickshire, and the Elizabethan State

A golden age for some, crooked and dishonest for others? Perhaps William Shakespeare grew up thinking this way about Elizabeth I and her ministers as disaster befell his father. Like thousands of others during Elizabeth’s reign, John Shakespeare’s business activities were denounced by well-connected informers linked to corrupt Exchequer officials. Once the queen had taken her cut, part of the profits went to privileged insiders who saw local men as easy targets. As documents recently discovered in the National Archives in London show, the resulting debts stalked the Shakespeare household for years.

In July 1569, John Shakespeare, then Bailiff of Stratford, sat on a jury at the session of Gaol Delivery in Warwick alongside one Chief Justice, a sergeant-at-law, and a fine array of local knights and gentlemen. It was probably the high point of his career. In popular culture, England in the 1570s is often portrayed as a time when Elizabeth I reigned over a nation grateful for deliverance from the turmoil experienced under her siblings, the boy king Edward VI and the implacably pious Mary I. Like so many historical commonplaces, it is far from the everyday reality. In the English Midlands political and religious division troubled many families, alongside that other great source of friction—money. For the aspirational John Shakespeare, the 1570s were not golden but tarnished by financial disaster and a social fall that haunted his son, William, whose later pursuit of gentle status is well-known.

John Shakespeare lent money at interest, usury that God-fearing Protestants had for years prohibited by law. He also bought and sold wool, a trade which the same lobby-groups had restricted to a privileged few but which was widely practiced by those, like John, who saw no reason why they should not also have a slice of this lucrative cake. For over a generation historians and Shakespeare scholars have used five Exchequer manuscripts dating from 1569 to 1573 to create the accepted account of the trouble that his business dealings brought to John. However, given that these troubles seem to have been resolved by 1573, some have also been increasingly insistent that his withdrawal from his Corporation duties after 1577 is evidence of a rediscovered Catholic conscience, relying on evidence that can tend towards wishful thinking.

As our research turned up an increasingly fractious and complex world in Warwickshire, and following a hunch suggested through long acquaintance with the foibles of the Exchequer documents in the National Archives in London, by 2018 we had uncovered over twenty new manuscript references to John Shakespeare among the Exchequer writ files. It was clear that in 1573, John Shakespeare’s troubles were only just beginning. Two cases and one man, the professional informer James Langrake, ensured that the Exchequer pursued John for debt into the next decade, by which time his business and credit were ruined and his son William a grown man. Alongside shady Exchequer officials who issued fake writs to entrap men like John Shakespeare, Langrake was part of a network that resisted all attempts to clean up the system. The new Exchequer documents show how deeply John Shakespeare was ensnared within it. As the name suggests, writs are written orders from institutions with legal powers, usually a court, and are still part of modern legal systems through documents such as subpoenas. In the 1570s and early 1580s, John Shakespeare was named on Exchequer writs sent to the sheriffs of Warwickshire who were nominally charged with chasing debtors. Those discovered mean that we now have documentary evidence that John’s financial problems started earlier and lasted longer than previously believed. The system was widely criticised and deeply divisive—in 1566, victims had even invaded Westminster Hall to berate and beat up prominent informers. Yet Parliamentary reformers found themselves continually stymied by a coalition of Exchequer bureaucrats, prominent members of the House of Commons, influential courtiers, and the monarch, who was easily persuaded that reform would intrude on her prerogative powers.

Ultimately nothing changed, and William Shakespeare grew up knowing that the government treated local men without influence in very different ways from the entrenched back-scratching of the Court and the Westminster bureaucracy. As so many of his plays attest, justice, power and corruption were never far from the creative imagination of a playwright who had experienced this uncertain world first-hand. For another Warwickshire family, the Ardens, resistance to the loss of influence through their political marginalisation meant the loss of more than credit. In 1583, indicted by a local jury that included men known to the Shakespeare family, the judicial murder of Edward Arden, a victim of Warwickshire’s cut-throat politics, meant that John Shakespeare may have counted himself lucky not to have lost more.

Glyn Parry was an undergraduate at St John's College, Cambridge, where he subsequently wrote his PhD under the supervision of Professor Sir Geoffrey Elton. He has held academic posts in Britain, Australia, and New Zealand, where he taught for many years at Victoria University of Wellington, and has held several fellowships at the Huntington Library, San Marino, California. He has been Professor of Early Modern History at the University of Roehampton, London, since 2013.

Cathryn Enis is an Honorary Research Fellow at the University of Birmingham. Her research links local and national narratives, looking for connections between past and current identities, particularly in the county of Warwickshire, where William Shakespeare grew up. She is particularly interested in the interaction between politics and culture, and works across a broad historical timeframe to understand how regional identities and stories are created and shared.