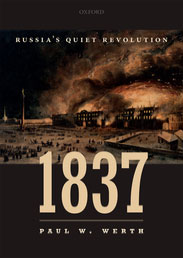 The assertion might seem strange. Even among historians of Russia, it is likely to produce head-scratching rather than nods of knowing approval. Most would point to other years—1613 and the birth of the Romanov dynasty; 1861 and the end of Russian serfdom; 1917 and the Bolshevik seizure of power—as more consequential. But in fact 1837 was pivotal for the country’s entry into the modern age and for defining many of Russia’s core attributes. Russia is what it is today, in no small measure, because of 1837.

The catalogue of the year’s noteworthy occurrences extends from realms of culture, religion, and ideas to those of empire, politics, and industry. From the romantic death of Russia’s greatest poet Alexander Pushkin in January to a colossal fire at the Winter Palace in December, Russia experienced much that was astonishing in 1837: the railway and provincial press appeared, Russian opera made its debut, Orthodoxy pushed westward, the first Romanov visited Siberia—and much else besides.

Take the death of Pushkin. Already acknowledged as Russia’s leading poet as 1837 began, Pushkin nonetheless secured his place in the Russian literary pantheon by the manner of his death: a duel precipitated by the romantic attentions of a Frenchman in Russian service to his wife Natalia. Extending over several months before the fateful day in late January, the drama and intrigue were intense. They implicated not just the poet and his family, but also diplomats, Russia’s secret police, other literary figures, and the emperor himself. Fatally wounded at a snowy clearing on the outskirts of Petersburg, Pushkin suffered in agony for two days before expiring as crowds gathered to express their sympathy. Though it took time for a full-blown cult of Pushkin to develop, its foundation was here, and it became a resource for tsarist, Soviet, and post-Soviet regimes to forge national and imperial unity. Pushkin became “our everything,” in the words of a literary critic in 1859, and the tsarist government sought by the 1860s to incorporate his image into the national pantheon. The centenary of his birth in 1899 became likewise an official affair, with new efforts to draw Russian literature into official culture. The cententary of his death allowed Stalin to exploit the cult even in the midst of the Great Terror. By the late Soviet era, the intelligentsia would contend, “Pushkin as a phenomenom is obligatory for us.” Modern Russia is inconceivable without the cult of Pushkin, and 1837 was central to its creation.

“Modern Russia is inconceivable without the cult of Pushkin, and 1837 was central to its creation.”

That same year saw an extraordinary trip by the heir to the throne, the future Alexander II, across nearly 20,000 kilometers of Russian territory. Visiting towns and villages across Russia and becoming the first member of the reigning Romanov dynasty to visit Siberia, Grand Prince Alexander Nikolaevich made a stunning impression on diverse subjects of the empire, Russians and non-Russians alike. An emerging periodical press followed his every move and made him the principal news item for many days across months. The trip accordingly permitted not only the heir himself, but also readers of the press to discover Russia’s provinces in all their diversity. The travel also laid foundations for his future rule, which among other things ended serfdom in Russia. But it was the prospect of actually seeing the young prince that was most intoxicating. Immense crowds gathered to catch a glimpse of the heir, who became the day’s principal celebrity. For many people in diverse parts of Russia, 1837 was unforgettable because they had seen the tsarevich in the flesh.

Still, arguably the most dramatic event of 1837 was the destruction of the Winter Palace in a colossal fire. Indeed this palace, one of Europe’s largest and a key edifice for the Romanov monarchy, occupied a central place in the imperial capital of St Petersburg and in emerging conceptions of the Russian nation. Its destruction was not just a material loss, but a deeply symbolic one representing an ideological challenge in an age of revolution. The monarchy therefore undertook a campaign to shape the narrative of the palace’s destruction, including also an effort to shape foreign opinion. Most shocking of all was the intention to reconstruct the palace entirely within 15 months. Amazingly, this goal was accomplished. The famous Hermitage State Museum, boasting one of the world’s greatest collections of art, is housed precisely in this reconstructed Winter Palace, a product of 1837.

These episodes only begin to account for the dynamism and consequence of Russia in 1837. The cumulative effect was profound. The country’s integration accelerated, and a Russian nation began to emerge within the larger empire, embodied in new institutions and practices—from opera and poetry to newspapers and palaces. The result was a quiet revolution, after which Russia would never be the same.

Paul Werth is Professor in the Department of History at the University of Nevada, Las Vegas. He has held research fellowships in the US, Germany, and Japan, and in 2010-15 he was an editor of the journal Kritika: Explorations in Russian and Eurasian History. His previous research focused on the problems of religion and empire in Russian History, and in 2014 he published The Tsar's Foreign Faiths: Toleration and the Fate of Religious Freedom in Imperial Russia with OUP. Earlier research convinced him of the importance for Russian history of the 1830s-and 1837, in particular.