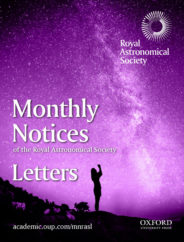 For papers that merit urgent publication, MNRAS Letters, the online section of Monthly Notices of the Royal Astronomical Society, publishes short, topical and significant research in all fields of astronomy.

Black holes are some of the most bizarre objects in the Universe but their existence is a robust prediction of the general theory of relativity of Albert Einstein. The discovery by Roger Penrose in the 1960s was honored with the Nobel Prize in Physics in 2020, along with the more recent discovery of Andrea Ghez and Reinhard Genzel of a giant black hole at the center of our Galaxy with a mass millions of times that of the sun.

Scientists have known for some time that much larger black holes with mass billions of times that of the sun existed as early as a few hundred million years after the Big Bang. The processes that led to the formation of such giant black holes that power the well-known population of quasars so early in the history of the Universe remain a mystery to theorists.

Scientists have also suspected for some time that a much larger population of these ancient giant black holes may be hidden by clouds of gas and dust that circle the black hole in a toroidal structure. These black holes can only be identified by the glow of infrared radiation from the toroidal structure that hides them. An international team of astrophysicists have discovered such a hidden giant black hole in a galaxy that existed only 1.4 billion years after the Big Bang. Over the past few year, the team of scientists has pursued a project called Herschel Extragalactic Legacy Project or HELP that put together the data from a number of telescopes, including ESA’s Hershel Space Observatory and NASA’s Spitzer Space Telescope, which observed the cosmos at infrared wavelengths. Infrared astronomy is especially difficult as the observations need to be carried out from space using telescopes that need to be cooled to a temperature close to -270 degrees Celsius.

One of the first areas of the sky analyzed by the HELP team was the Cosmological Evolution Survey (COSMOS) field, which is one of the best studied regions of the sky with an area about ten times that of the full moon. The galaxy that hosts the black hole is barely visible even in the deepest image of the COSMOS field taken by the Hubble Space Telescope, which can only observe the optical and ultraviolet emission of galaxies. What made the discovery of this black hole possible is that fact that it is much brighter at infrared wavelengths.

What is exciting about this discovery is that the COSMOS field where the galaxy that hosts the black hole was discovered is only a very small part of HELP. The HELP survey covers an area of the sky which is about 600 times larger. The team estimate that when the analysis of all the HELP data is complete a lot more of these hidden black holes will be found. The team, which was led by Professor Andreas Efstathiou of European University Cyprus, estimate that there may be at least as many hidden black holes as the ones we can see directly as luminous quasars.

Katarzyna Małek is a Professor of Astrophysics at National Centre for Nuclear Research in Poland. Her current research activities focus on modelling the spectral energy distribution of galaxies that are luminous in the infrared.

Raphael Shirley is a postdoctoral researcher at the University of Southampton who uses wide area imaging surveys to understand galaxy formation and evolution. He uses data from the Herschel Space Observatory and many other space based and ground based observatories.

How do black holes shape the cosmos?