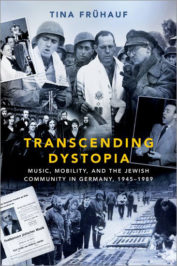 Transcending Dystopia: Music, Mobility, and the Jewish Community in Germany, 1945-1989

Research for Transcending Dystopia over the course of almost a decade was truly a journey, piecing together disparate snippets that have been transmitted in different repositories to gain insight into the musical practices and lives of Jews in postwar Germany. Among the 26 archives and private collections I consulted, two experiences stand out—the first being somewhat unusual, the second being quite extraordinary.

During its 40-year existence, the East German Ministry for State Security, also known as Stasi, undertook one of the most intrusive and oppressive mass surveillance operations ever conducted. It collected millions of files on people it suspected of being enemies of the state. Today, the archive contains miles of shelved documents, nearly two million images, and over 30,000 video and audio recordings housed in 13 branches throughout Germany.

Although the archive has no particular music focus, musicians were naturally a subject of the operations as well—both as informal collaborators (known in local parlance as IMs) and as surveilled subjects. As such I was hoping to find documentation on East Germany’s perspectives on Jewish culture and its main protagonists as well as the political instrumentalization of the Jewish communities and Jewish music. I was particularly interested in information related to Werner Sander (1902–1972), a native of Breslau and cantor of the Jewish community in Leipzig from 1950 until his death, as well as the singers of the Leipziger Synagogalchor, a mixed choir of 25 to 30 non-Jewish lay singers dedicated to the cultivation and preservation of synagogue music as well as Yiddish and Hebrew folklore since 1962.

The process of locating materials turned out to be quite unique. It began with a formal application that is certainly more involved than elsewhere, but on the whole quite straightforward. My request to view materials was granted after a few months, in March 2014. Unlike any other archive, I was assigned a case worker who would locate files for me from all branches and, if possible, make them available in Berlin. The first step was to provide names, addresses, and dates and places of birth of all persons of interest to my research focus (17 names in all). By mid-July 2014, a first batch of documents was waiting for me in Berlin—but what a bummer. The detailed information in the files pertaining to individuals was tedious, bureaucratic, and—pertaining to my research—largely meaningless. Do we really need to know at which times Berta B. walked her dog? In the case files of persons still alive or deceased less than thirty years ago, passages (potentially of interest) were blacked out. Indeed, this was anything but The Lives of Others, the 2006 nail-biting Oscar-winning Stasi drama. Only a few singers were routinely monitored. The vast majority held fast to their public commitment to socialism and aroused no suspicion, following the same conformist middle path as many other GDR citizens.

Although the research results were meager (surprisingly, there were no documents on the West Berlin cantors, who in GDR times shuttled unhindered between East and West Berlin in order to officiate and perform at concerts), the retrieved files nevertheless provided some useful details. In 1967, charges were brought in the Federal Republic of Germany against the former Breslau Gestapo chief and his assistant. The Bielefeld Regional Court called Werner Sander and his wife Ida to the witness stand. In this context, the Stasi made an inquiry as to whether Sander had really been politically persecuted and interned in a concentration camp and whether it was advisable for him to take the stand. The Stasi had reservations about personal security and discrimination and feared that the GDR would be exposed to criticism. In light of Sander’s surveillance report, however, there appeared to be no concern about him fleeing the country (as many other citizens did). In fact, the Stasi never doubted the loyalty of the Sander family, having issued Ida Sander a special permit to travel to West Germany for family festivities in 1959. In the end, however, Sander did not appear as a witness (the reasons are unknown).

Interesting details also stemmed from general files, such as an undated typescript from the 1980s, when the regime began to perceive the dwindling number of Jews as a demographic and cultural problem. The typescript includes a section on Jewish music that discusses synagogue concerts in Berlin, the well-known chanteuse of Yiddish song Lin Jaldati and her family, and the Leipziger Synagogalchor. The choir is praised as an exceptional example of the preservation of Jewish culture, though it goes unmentioned that all the singers at the time were non-Jews. As such, the choir was considered politically transparent enough to represent and strengthen the idea of anti-fascism and the ideas of heritage and tradition in the service of the state. In order to draw conclusions for my book, all this material alone was not sufficient. I had to supplement my findings with interviews of the singers (and others)—an inherently complex and sensitive undertaking due to some interviewees’ status as informal collaborators and/or objects of the Stasi. Still, the Stasi archive proved to be an episode in the life of a musicologist unlike any other. Research was not about scores or musical practices, but about politics and (slanderous) details based on secret police files.

Early on in my research, I stumbled across—let’s call him “a person of interest”—Adi Patti. Born in 1899 as Adolf Schwersenz, he originally aspired to be an actor, but having been graced with an impeccable tenor voice, he studied music at the Royal Academy of Music in Berlin right after returning from the battles of World War I. Between 1920 and 1925 he also studied voice privately in Berlin and in Milan. After a brief engagement at the Berliner Kammeroper in 1925, he worked as a radio and opera singer, promoting himself as German-Italian heroic tenor under the artist name Adi Patti.

Nazism put an end to his flourishing career; and wisely, already way before being expelled by the Reich Music Chamber on 3 December 1936, Adi trained under well-known cantors to become a cantor himself with the Jewish community of Berlin. According to contemporary newspaper reports, Adi also occasionally performed opera and operetta with the Jewish Culture League, a segregated performing arts organization established by and for Jews in collaboration with the Nazis. Having survived the Second World War, after 1945 he became one of the main players in the reconstitution of Jewish cultural life in Berlin, initially establishing an autonomous community with an active music program.

He was also instrumental in the first Jewish broadcasts in postwar Germany, known as Sabbatfeiern, during which he sang liturgical and paraliturgical pieces, often accompanied by a choir. But by the late 1940s his name had disappeared from concert programs and announcements, and I wondered what happened to this determined and industrious man, who can be credited with the revival of Jewish cultural events in postwar Berlin. But nothing and nobody could explain this disappearance—the deeper I dug, the deeper the void. Adi Patti seemed to have vanished from any written record. Then one day—I had shifted my focus to another person of interest, the banker and bureaucrat of the Berlin magistrate Siegmund Weltlinger who happened to write a few pieces for voice and piano after the war—my luck changed.

Sifting through correspondence in the Siegmund Weltlinger Papers at the Landesarchiv Berlin, I discovered a photograph inserted into a letter that showed a familiar face: Adi Patti in a chair at a beach, along with wife and daughter! The letter, however, revealed the name of a different sender, that of Ralph Svarson, as it turned out, the name he had assumed shortly after emigrating to the United States in the spring of 1947. Adi eventually moved to Lawrence, Massachusetts, where he worked as a cantor and also gave voice lessons until his untimely death (he was diabetic) on 19 January 1959, in Methuen. Only one step further, the questions on his trajectory remained. With a bit of finesse, I was able to locate his daughter Susan Svarson Kelleher, who lived in Massachusetts, but there was no response to my inquiries. Susan had died in 2009; I was too late. An inquiry with her daughter Kathy Luzader in 2010 was ill-timed—the loss was still too fresh to talk about family history. But then in 2013, Susan’s son James got in touch and invited me to the family home in Melrose, MA. There, I found a treasure trove: the sheer volume of prayer books, books in Hebrew, and liturgical music (both printed and copied by hand) in his estate was just mind-blowing. There were lots of old articles, photos, albums, posters, and even a Torah scroll from Berlin. Some of it was in the attic and had not been accessed for years, if not decades. What I unearthed allowed me to paint a full picture of a fascinating personality, who survived the trials and tribulations of life and (post)war times with imagination and verve. But what’s even more meaningful, I was able to connect the Kelleher family to the Leo Baeck Institute in New York, and to facilitate just a year later, the permanent transfer of a large part of the estate. It has been processed and catalogued as AR 25615 at the Center for Jewish History and can be accessed in the online archive.

Tina Frühauf is Adjunct Associate Professor at Columbia University and serves on the doctoral faculty of The Graduate Center of the City University of New York. She is the editor of the award-winning Dislocated Memories: Jews, Music, and Postwar German Culture (OUP, 2014) and has published widely on German Jewish music culture and twentieth-century music