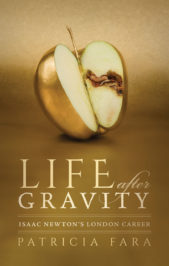 Isaac Newton is known as the scientist who discovered gravity, but less well-known are the many years he spent in metropolitan London, and what precisely he got up to in that time…

How well do you know the latter part of Newton’s life? Test yourself with this quiz from Patricia Fara, author of Life after Gravity: Isaac Newton’s London Career:

Patricia Fara lectures in the history of science at Cambridge University, where she is a Fellow of Clare College. Her prize-winning book, Science: A Four Thousand Year History (OUP, 2009), has been translated into nine languages. In addition to many academic publications, her popular works include Newton: The Making of Genius (Columbia University Press, 2002), An Entertainment for Angels (Icon Books, 2002), Sex, Botany and Empire (Columbia University Press, 2003), Pandora's Breeches: Women, Science and Power in the Enlightenment (Pimlico, 2004), and most recently A Lab of One's Own: Science and Suffrage in the First World War (OUP, 2018).