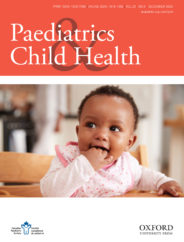 Paediatrics & Child Health (PCH) is the official journal of the Canadian Paediatric Society, and the only peer-reviewed paediatric journal in Canada. Its mission is to advocate for the health and well-being of all Canadian children and youth and to educate child and youth health professionals across the country.

Who amongst us would have imagined that in late 2019 a normally uneventful event would change the world forever? As far as we can tell, all that happened is that a particularly clever virus (SARS-CoV2, which causes COVID-19) spread from an animal to a human. There are three attributes that allowed this virus to change the course of history.

First, animal-to-human viral transmission happens frequently but unlike most emerging viruses, this formidable one had the attribute of readily spreading from person-to-person. In the absence of precautions, each person infects an estimated two to three others. Prior pandemics in our lifetime were all due to influenza. The elderly often had immunity from a similar virus that circulated during their childhood. This brings us to the second attribute; for this virus, we all appear to be susceptible. The same is true of other emerging viruses, including Ebola, but what sets SARS-CoV2 apart is the third attribute. Infected persons have the virus in their nasal and oral secretions for a few days prior to symptom onset and are contagious to close contacts during that time. On top of that, about 20% shed viral contagions yet never develop symptoms, allowing the virus to stealthily spread around the globe.

This pandemic may be neatly sorted out by summer 2021 if we can immunize people worldwide with a vaccine that confers long-lasting immunity. However, the situation may drag on beyond that and the impact for children may last a lifetime. Children who grew up being cautioned about the dangers of this virus will forever be worried about “catching or spreading a cold.” It is tricky to derive a silver lining from this pandemic but a decrease in the number of colds we get in the future may be it. My father-in-law used to write in his Christmas letter that his daughter-in-law, the pediatric infectious diseases physician (as in me) was trying to cure the common cold. Neither I nor anybody else has succeeded in this venture, but I predict that children will get fewer colds post-pandemic. The general public has bought into the implementation of simple measures to decrease spread. Previously, it was mainly acceptable to be out in public with a cough, runny nose, or laryngitis. I used to brag that in four decades I had only missed one day of work because of illness. That is clearly no longer something to be proud of and I need to work on nobler accomplishments. COVID-19 appears to be spread primarily from close contact, especially with a symptomatic person. It seems likely from now on, with or without a mask, it will no longer be acceptable to be outside one’s abode with any evidence of “a cold.”  Perhaps we will evolve from the concept that a child is “sick at home” to the concept that they are “studying from home because of mild viral symptoms.” A new challenge for parents will be that from 2020 on, a child only needs to mention “a sore throat” to stay in their warm little bed instead of traipsing to the school bus.

“Children who grew up being cautioned about the dangers of this virus will forever be worried about ‘catching or spreading a cold.'”

Children can be cruel. Cruelty flows downhill. Tormented children eventually replicate that behavior towards others. I remember children writing “No Gets” on their hands to protect themselves from “fleas,” purportedly carried by specific children who were not plunked in the bathtub as often as they should have been. Today’s children are encouraged to think of anyone from outside their bubble of friends and family as being covered in a cloud of germs. This will undoubtedly make it even more difficult for introverted or delightfully eccentric children to find friends. On the other hand, for some children, it is a huge relief to no longer be expected to make eye contact or conduct conversations with people whom they barely know.

It appears likely that adults and children will emerge from this pandemic with less faith in physicians. Early proclamations on how to avoid spread were incorrect as they were based on the false assumption that SARS-CoV2 would be similar to its cousin SARS-CoV1 with primarily symptomatic persons being contagious. International borders remained open and people were told there was no need to wear masks in public. Physicians should not be blamed for reversals in strategy and tactics as the original advice was based upon the most reliable data available at the time. Although physicians do not always provide perfect advice, most people live longer and healthier lives because of their encounters with the medical profession. Childhood immunizations have saved more lives than any other medical intervention has or probably ever will. If my predicted loss of faith in physicians manifests, my most sincere hope is that this does not lead to a decrease in immunization rates. I predict that this will hinge upon the safety and efficacy of the COVID-19 vaccines that are eventually offered.

Happiness correlates with how one feels about oneself, which, in turn, correlates with how effectively one interacts with others. Many of us, including children, yearn for more in-person interaction. Warmth, humor and non-verbal cues are often missing in telephone calls and two-dimensional virtual meetings. My hope is that post-COVID19, after months to years of the world slowing down, we will be more appreciative of each other and tread more softly on each other’s toes.

Joan Robinson is a pediatric infectious diseases physician at the Stollery Children’s Hospital in Edmonton Alberta and is editor-in-chief of the Canadian Paediatric Society journal Paediatrics & Child Health.