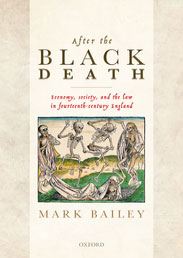 After the Black Death: Economy, society, and the law in fourteenth-century England

Conspiracy theories abound that COVID-19 originated in a laboratory, although history provides a number of examples of global pandemics caused by a pathogen crossing over from mammals to humans. The best example is the Black Death of 1346-53, which killed around one half of the population of the known world and caused global economic output to fall by perhaps 40%. The sudden change in the behaviour of this disease was linked directly to a sustained period of extreme weather and major climatic change, to heightened levels of global trade, and to over-population and impoverishment. Sound familiar?

The first outbreak of the Black Death was—still is—the worst pandemic and catastrophe inflicted upon humanity in recorded history. We can only imagine the terror, suffering, pain, and incomprehension it caused. Even worse, it recurred frequently over the next three centuries before finally disappearing from Britain in the 1660s and France in the 1720s. As the COVID-19 pandemic flares in 2021, we might wonder about the long-term socio-economic effects of epidemic disease. It may be a surprise to learn, then, that the age of the Black Death proved to be a major watershed in human history, by triggering a range of institutional and social changes that opened up the route to liberal and commercial modernity.

While all of the known world had to cope with a heavy pandemic burden between the fourteenth and seventeenth centuries, coping mechanisms and levels of social and economic resilience varied greatly. On the one hand, Ireland regressed to how it had been in the 1150s and the decay of the Nile irrigation system caused the wealth and economy of Mamluk Egypt to collapse. On the other hand, some regions of northwest Europe shed their “feudal” structures and became recognisably “modern.” England was a feudal society and economic laggard when the Black Death first arrived, but by the 1660s it was one of the most advanced economies in the world.

Thus, in the long run, similar demographic experiences resulted in dramatically different social and economic outcomes. Pandemics are catastrophes for some and opportunities for others. What explains the difference? Inevitably, the answer to that question is very complex and highly contested.

Responses to the initial outbreaks of disease in England were decisive, although by c.1400 there was still little to suggest that its long-term trajectory would be exceptional. Indeed, the 1350s and 1360s had been very uncertain and volatile, due to an unprecedented combination of major plague epidemics in 1361 and 1369, repeated epizootics among animals, and extreme weather conditions. Crucially, though, these two decades also witnessed dramatic changes.

The government introduced radical and novel legislation in 1351 to regulate the markets for labour and foodstuffs, the first occasion when the state had intervened at a moment of national crisis to protect the welfare of the populace. Its initial policies were neither equitable, successful, nor popular, but they established the state as a standing authority in areas of social policy and laid the foundations for the systemic relief of the poor, which by the seventeenth century helped to eradicate famine from England.

The old, creaking system of serfdom rapidly decayed under the sudden shock of worker and tenant shortages, to be displaced by more contractual arrangements in the land and labour markets. This happened quicky, well before the Peasants’ Revolt of 1381, indicating that commercial forces were already more powerful than the residual coercive powers of lordship under feudalism. Consequently, factor markets became more commercialised, and the result was a rapid reduction in wealth inequality and a rise in GDP per head.

Chronic labour shortages also encouraged women to seek employment, which in turn may have resulted in a delay in the average age at marriage, increased fertility control, and the birth of the western nuclear family. By the 1360s greater disposable income among the lower orders of society was already fuelling a mini consumer revolution, exemplified by the increased consumption of better food and clothing. It was associated with a shift to employment in manufacturing and services. In the 1380s the percentage of the English workforce in industrial employment was far higher than in much of eastern Europe in the 1680s.

Over the next two centuries these initial changes were consolidated, refined, and reinforced to varying degrees, so that England was well placed to adapt when, after 1500, the population eventually began to recover again. Its particular institutional and legal structure had mediated the impact of epidemic disease in ways that changed social relations, opened up factor markets, and discouraged the reimposition of serfdom.

The Black Death did not determine the course of history, but it did shift the existing paradigm radically and create the opportunity for parts of northwest Europe to industrialise eventually. Historians are now paying much more attention to the role of nature—whether tiny pathogens or vast climate systems—in explaining the trajectory of human development. Understanding the Black Death also underlines the inter-disciplinary nature of history, and, in the face of COVID-19, the subject’s continuing fascination and importance.