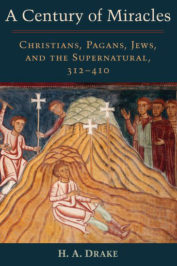 A Century of Miracles

After almost 2,000 years, Nero’s fiddle is back in the news. Everyone knows the story of how the Roman emperor Nero (54-68), in the midst of a crisis, ignored his duties and instead sang songs. The phrase “Nero fiddled while Rome burned” is now shorthand for a failure of leadership. It has even made its way into our imagined future, as a theme for a “Star Trek” movie (“Nero Fiddles, Narada Burns”).

So it comes as no surprise that U S Senator Bernie Sanders updated the line to criticize President Donald Trump’s handling of the pandemic: “Nero fiddled while Rome burned. Trump golfs.”

But are we being entirely fair to Nero? Here are the bare facts.

In July of the year 64, Nero was vacationing at Antium (the modern Anzio), when he learned that fire had broken out in the capital city. He raced back to Rome, but there was little he could do in a city that was composed primarily of jerry-built tenements and narrow, twisting streets. Before the fire burned itself out a week later, 10 of Rome’s 14 districts had burned to the ground and thousands in this city of between half a million and a million souls had lost everything. Nero arranged emergency shelter and supplies of food and drink, and even opened his own palace and gardens for shelter.

At some point, the exhausted emperor (who fancied himself something of a philosopher and musician) is said to have consoled himself by singing about another great conflagration—the fall of Troy, a Homeric tale that the poet Vergil had turned into Rome’s great foundation epic, the Aeneid. Of course, Nero did not use a fiddle—bowed instruments would not become popular for another 1,000 years. To accompany himself, he probably would have used a cithara, a harp-like portable instrument with seven strings.

In the aftermath of the fire, Nero offered financial incentives to landlords to clear their property of debris and begin rebuilding, and he also instituted civic planning, setting standards for wide streets and open spaces, and height limits on buildings. He also mandated that developers use stone instead of wood.

Not exactly what we think of when we hear that “Nero fiddled.” Why, then, the bad press?

Almost everything we know about Nero comes from one of two sources—Roman senators and Christians. Neither had any reason to think kindly of Nero. He terrorized senators, members of an august body who had been reduced to mere rubber stamps. A note from the emperor that they had displeased him was tantamount to a death sentence, and Nero wrote lots of notes.

Our most detailed account of the fire comes from the pen of one senator, Cornelius Tacitus, who wrote about half a century later. Tacitus is on everyone’s list of top 10 historians of antiquity. He tried to write sine studio et ira (“without passion or partisanship”), but he could not forbear putting his own spin on Nero’s reforms. “These acts,” he wrote, “though popular, produced no effect, since a rumor had gone forth everywhere that, at the very time when the city was in flames, the emperor appeared on a private stage and sang of the destruction of Troy, comparing present misfortunes with the calamities of antiquity.”

So there it is: Nero “fiddles” as Rome burns was a “rumor.” Tacitus was too conscientious to repeat the rumor as fact, as later authors would do, but neither was he about to take a pass on such a damning story about an emperor he loathed.

Christians had no love for Nero, either. Tacitus, once again, gives us the reason. Because another rumor began circulating that the emperor himself was behind the fire, Nero looked for a scapegoat and found one in the members of this new sect (the year 64 was only about 35 years after the Crucifixion), who did not have many friends in the city. “An immense multitude,” Tacitus tells us, “was convicted, not so much of the crime of firing the city, as of hatred against mankind. Mockery of every sort was added to their deaths. Covered with the skins of beasts, they were torn by dogs and perished, or were nailed to crosses, or were doomed to the flames and burnt, to serve as a nightly illumination.”

To Christians, Nero understandably became the father of all the persecutions they would subsequently endure. Some even saw the numbers in his name as proof that he was the Antichrist. So don’t look for mercy in these sources.

I hold no brief for Nero. But a better grasp of what he did, and why he fiddled, can help us gauge the incompetence of rulers in later ages.

H. A. Drake is emeritus professor of Roman history at the University of California, Santa Barbara. He is the author of A Century of Miracles and Constantine and the Bishops.