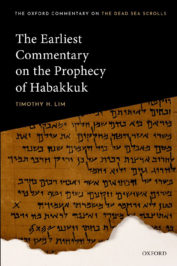 The Earliest Commentary on the Prophecy of Habakkuk

The sectarians reflected in the Dead Sea Scrolls, identified with the Essenes, were not the isolated community of popular imagination that spent their days praying, studying scriptures, and waiting for one or two messiahs in the desert. Some of them did do so, especially those who lived at a site near the Dead Sea known as Khirbet (‘ruins of’) Qumran, but most of them did not. Four thousand of them lived in towns, villages, and large groups throughout Judaea. They were in Jerusalem, where a gate was named after them, and also at Masada, where their writings were found.  They worked in agriculture, animal husbandry, bee-keeping, and crafts of various kinds, but did not produce weapons.

They participated in public life by trading with other Jews and gentiles, and some of them could read and speak Greek. They were peace-loving, but that conviction did not prevent them from participating in the first Jewish revolt against Rome, 66-70 CE, preferring to be tortured and killed as martyrs rather than blaspheme the lawgiver or eat forbidden food.

The sectarians knew about the Romans, whom they designated by the cipher “the Kittim,” and described them as “swift and mighty in war” as they mercilessly destroyed many with the sword under Roman rule. The Roman commanders, as the Essenes described them, mockingly sneered at and besieged fortresses, symbols of the power of kings, princes and people, and all the nations were in fear and dread of them. The sectarians were familiar with the practices of the great army of the Romans, detailing as they did how it crushed and plundered the towns of the earth as the army marched across the expanse of the lands of the eastern Mediterranean, coming from afar and the coastlands, devouring all the peoples “as an eagle.” The sectarian commentator (“pesherist”) of the prophecy of the biblical book of Habakkuk described the Roman army’s tactical use of horses and beasts in trampling the earth underfoot. The pesherist knew that the Romans imposed a payment of tribute of corn, money, and forced labour upon the nations, including Judaea in the province of Coele-Syria, and celebrated their success by sacrificing to the ensign of their military standards.

Political and military strategies of the Romans were known to the Essenes. They knew that the Romans made “allies” and “friends” of those who feared to confront them. They understood that the Romans were cunning, wily and the Essenes considered them deceitful as the Romans patiently planned to control the whole region. They described the Roman Senate as “the council of the house of [their] guil[t]” that dispatched a succession of “praetors” or governors to Judaea to devastate the land. With this antipathy towards the Romans it is not surprising to learn that one of them, named John the Essene, participated in the first Jewish revolt against Rome. He, being one of three men of exceptional strength, was appointed as general in charge of the areas north and west of Judaea, the toparchy of Thamma, Lydda, Joppa, and Ammaus.

The Essenes were a Jewish “sect” or school of philosophy with two branches: some were celibate, disdained marriage and adopted children; others believed that marriage and procreation were needed if the group was to continue and not disappear. Their community was hierarchical, structured, and disciplined. They cared for the elderly and the ill, and they shared their belongings with each other. They studied the holy books of Judaism, notably prophecy, and were punctilious in their observance of Jewish law, especially as regards purity and sabbath laws. They wore white linen, renounced pleasure, and regarded continence as a virtue. The Jewish historian Josephus compared them to the Greek Pythagoreans.

The Essenes practised a form of prophecy that involved the prediction of the fate of political figures. Judas the Essene foretold the death of Mattathias Antigonos at an underground place called “Strato’s Tower.” Manaemus prophesied that the boy Herod would one day become king of the Jews, and as a result the Essenes were spared the requirement to take an oath of loyalty to the monarch. It is thought that this consequent favour was the reason why there was an “Essene Gate” in the first wall of Herodian Jerusalem. And Simon the Essene divined the demise of Archelaus as ethnarch of Judaea, and his banishment to Gaul.

Most of the Essenes lived life within Judaean society. Philo described them with the triple definition of piety: love of God, love of virtue, and love of men. Like other Jews, they relied on God and venerated the lawgiver. But they also held beliefs that distinguished them from other Jews: they believed in providence and fate, the resurrection of the flesh, and immortality of the soul. Distinct to all others in the ancient world, they were against slavery, condemning slave-ownership as both unjust and ungodly, and against the law of nature that made all men equal at birth.

Timothy H. Lim is Professor of Hebrew Bible & Second Temple Judaism, University of Edinburgh. He is a world- renowned expert on the Dead Sea Scrolls and canon research.