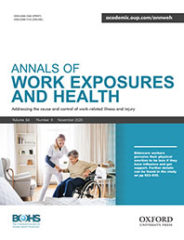 Annals of Work Exposures and Health

Annals of Work Exposures and Health  is dedicated to presenting advances in exposure science supporting the recognition, quantification, and control of exposures at work, and epidemiological studies on their effects on human health and well-being.

The severity of the COVID-19 pandemic and the subsequent torrent of research has brought a simmering debate about how respiratory infectious diseases are transmitted to a boil, in full view of the public. The words airborne, aerosol, and droplets are now part of the daily news—but, why?

Simultaneously, there has been a debate about which transmission route or routes are dominant for certain infectious diseases. For most viral respiratory pathogens, the convention is that droplet and contact transmission are more important than airborne transmission. Evidence, particularly that which has emerged from research on influenza and SARS, has led to recognition that some viral respiratory pathogens may be transmitted through the airborne or aerosol route. That is, virus inhalation can result in infection. Regarding COVID-19, the evidence of airborne or aerosol transmission has become overwhelmingly persuasive to many in the scientific community, leading to vocal criticism of public health organizations like the World Health Organization and the United States Centers for Disease Control and Prevention which argued, at least initially, against this possibility.

Identifying the transmission route of an infectious disease, including COVID-19, is not an esoteric scientific question because it is the transmission route that drives the infection prevention and control strategies. Consistent with initial determinations that COVID-19 is transmitted through the droplet and contact routes, the primary public health interventions were physical barriers, physical distancing, face shields, and hand hygiene. Later, cloth masks were added. These strategies have little impact on the movement of small droplets that can be inhaled, though new research suggests that cloth masks can prevent the emission and inhalation of small droplets. The performance of cloth masks (and surgical or medical masks), however, is meaningfully inferior to that of respirators, including N95 or FFP2 filtering facepiece respirators.

Acknowledging the contribution of airborne or aerosol transmission to COVID-19 requires that we take different precautions to protect workers, including the use respirators to prevent inhalation of respiratory droplets (large and small), and ventilation or filtration devices that capture respiratory droplets at the source or while traveling through the air. While updating the disease transmission paradigm during a global pandemic may seem overwhelming, we owe it to the workers who sustain the functions of daily living and are at risk of COVID-19—and a myriad of endemic and future pandemic diseases—to use the best, current scientific evidence to guide prevention strategies.

Rachael Jones is an Associate Professor at the University of Utah School of Medicine, and is the new Chief Editor of the scientific journal Annals of Work Exposures and Health. Her research interests include preventing the transmission of infectious diseases to healthcare workers, and protecting the health of workers by characterizing and preventing hazardous exposures.