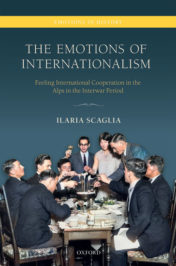 In the midst of a pandemic, we seldom hear universities mentioned as crucial sites for international understanding and cooperation. Images of students confined to their housing dominate the media cycle. More generally, business models that reduce programmes to products, students to customers, and education to a means for economic growth prevail. Political activism on-campus is rarely encouraged or celebrated in public life.

A hundred years ago, in the aftermath of the First World War, the situation was quite different. The League of Nations regarded education as central to the propagation of ideas of peace. It also considered universities as critical crossroads for international communication. Its Committee for Intellectual Cooperation, staffed largely by academics, pushed for student and faculty exchange and coordinated communications among a wide array of organisations. After 1945, these programs continued; and in subsequent decades programmes such as the European Community Action Scheme for the Mobility of University Students (ERASMUS) built and expanded on this tradition.

Pandemics and deadly diseases did not stop the work of putting education—and especially universities—at work to build international understanding and cooperation. Inspired by the League’s work, Dr Louis Vauthier established an international University Sanatorium in the Swiss village of Leysin. From the 1920s to the 1950s, students and faculty from all disciplines continued their academic work while undergoing lengthy treatments for tuberculosis. Guest lecturers administered the teaching, while universities world-wide stocked the University Sanatorium’s library with the latest publications. Hundreds benefitted from this institution, as illustrious visitors—most famously Gandhi—turned the clinic into a symbol of peace and interwar internationalism.

Indeed, scores of contemporaries celebrated the success of this experiment. Rather than conceding to depression, which often accompanied lengthy and debilitating illnesses such as tuberculosis, University Sanatorium patients devoted themselves enthusiastically to their work. At a time of increasing nationalism and political polarisation, they entangled collaborations and friendships many thought would translate from the educational to the political realm.

If antibiotics eventually made the University Sanatorium redundant, Vauthier’s experiment continued to be influential and still provides useful insights for the present. To be sure, some of the accounts of its success might reflect intentions and attempts at marketing more than reality; and some of the assumptions of that time—such as the inherent superiority of intellectuals or the demographic composition of that group, for instance—are best left to the past. But the notion that education sits instead at the core of any peaceful democratic international society is worth resurrecting in our times. Indeed, like it did a century ago, it might help to counter rising authoritarianisms in all of their forms. It might also help to face growing mental health challenges while also restoring the value of expertise and of those who pursue it.

What would a strategy inspired by this history look like in practice? First, it would make us conceptualise “student experience” in a different way, bringing out its collective features and the intercultural, political, and civic values of learning. Second, at a time when the COVID-19 pandemic has slowed down student and faculty travel, and despite efforts at digitisation, access to both libraries and archives has been greatly reduced, it would prioritise student and faculty exchanges as key to the formation of future generations of world citizens; it would also protect access to research facilities to include the vitality of what Vauthier would have called “intellectual” work in the recipe for future cultural, societal, and civic life both domestically and abroad.

A native of Italy, Ilaria Scaglia studied and taught international history in the United States before joining Aston University in Birmingham as a Lecturer in Modern History in 2018. Her main fields of interest include the history of internationalism and the history of aesthetics and emotions. She is a Board Member of the Coordinating Council for Women in History (CCWH) and an active committee member of the Society for Historians of American Foreign Relations (SHAFR). Her book The Emotions of Internationalism: Feeling International Cooperation in the Alps in the Interwar Period was published by Oxford University Press.