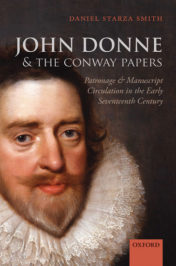 John Donne and the Conway Papers: Patronage and Manuscript Circulation in the Early Seventeenth Century

The Melford Hall Manuscript is a large, expensively bound manuscript volume containing previously unknown witnesses of nearly 140 poems by John Donne (1572-1631), one of the most outstandingly significant poets and preachers of the early modern period. Discovered by Gabriel Heaton of Sotheby’s during a routine survey of Melford Hall in Suffolk, and restored by sale by the prestigious Brockman binders, it sold in 2018 for £475,000 (£387,500 plus auctioneer’s premium). After a high-profile sale at auction, the UK government intervened to keep the manuscript in the country, in recognition of its enormous importance to the UK’s cultural history. In December 2020, the British Library announced that the volume now resides with them, shelfmarked as Egerton MS 3884. While it is being prepared for use by readers in 2021, it has in the meantime been published online here. What can this manuscript tell us about this prolific and brilliant writer and the literary and textual worlds in which he lived?

Donne’s daring and groundbreaking poetry was printed posthumously as Poems, by J. D. in 1633 (then again in 1635 and five other seventeenth-century printings), but many of its earliest readers would have encountered him in handwritten, privately circulated scribal copies. Donne was the most transcribed literary author of his day, and a true publishing phenomenon of the manuscript medium. His own words (originally written in Latin, here quoted in translation) are frequently cited by scholars seeking to understand the particular magic of an encounter with a hand-written literary text in Renaissance England:

But what is writ by hand we reverence more:

A Book that with this printing-blood is dyed

On shelves for dust and moth is set aside,

But if’t be penned it wins a sacred grace

And with the ancient Fathers takes its place.

The Melford MS is the second-largest known collection of Donne’s verse in manuscript, and its discovery calls for a major reconsideration of his early readership and reputation. Studying an artifact like Melford can tell us a huge amount about who Donne’s earliest “fans” were, which of Donne’s writings were available to them, and how they accessed, read, stored, shared, and valued it.

It’s an exciting time to be working on Donne’s texts and early readers. Just last year another manuscript was discovered at Westminster Abbey by Matthew Payne, the Abbey’s Keeper of the Muniments. Where Melford is a large bound volume of poetry, the Westminster Abbey MS was a small booklet containing an unusual prose satire. It’s likely that other texts remain to be found, so it’s important that we know as much as we can about this influential figure and his milieu.

The find is also exciting precisely because so many scholars have focused their attention on Donne’s texts in recent years, giving us a rich source of knowledge and sophisticated techniques of analysis to help understand this major new text. One of the most important early modern scholarly endeavours of the last three decades is the multi-volume Donne Variorum edition of his poetry, and thanks to this standard-setting work we are in a very strong position to contextualize the Melford discovery and set it in context. The final volumes of the Variorumwere completed just as Melford was found, and their textual work does not deal with it: Melford thus presents the next generation of textual scholars with exciting new research opportunities. (For more information about the manuscript, see a companion blog here.)

For this next generation of scholars, one of the most important research resources will be the Oxford University Press catalogue. Much of the most important twentieth-century work on Donne’s texts was pursued in Oxford and published by the university press: Helen Gardner’s editions of the The Divine Poems (1952) and The Elegies and the Songs and Sonnets (1965); Wesley Milgate’s edition of Donne’s Satires, Epigrams, and Verse Letters (1967) and The Epithalamions, Anniversaries and Epicedes (1978); T. S. Healy’s Ignatius His Conclave (1969); and the Paradoxes and Problems, edited by Helen Peters (1980).

The tradition remains strong, and the list below highlights the leading role that OUP continues to take in exploring Donne, his intellectual context, and the textual cultures in which his writings first circulated. The best starting point for an exploration of this author is the Oxford Handbook of John Donne, gen. eds Jeanne Shami, Dennis Flynn, and M. Thomas Hester.

In addition to Janel Mueller’s recent edition of his poetry, and John Carey’s edition from 1996, Donne’s sermons are currently being prepared in a major new edition of 16 volumes by a team of scholars led by Peter McCullough. The editing of Donne’s prose letters for Oxford has become something of a scholarly legend: the extraordinarily careful scholar I. A. Shapiro worked on this project for some 65 years before his death, before the project was taken up by a team of scholars who are making great progress without sacrificing any of Shapiro’s care.

A number studies respond directly to the question of Donne’s texts in manuscript, including Lara Crowley’s Manuscript Matters, Joshua Eckhardt’s Manuscript Verse Collectors and the Politics of Anti-Courtly Love Poetry, and my own John Donne and the Conway Papers. Most recently, Erin McCarthy’s Doubtful Readers situates Donne in the context of print publication.

OUP has set the ground for these studies by supporting foundational work on early modern textual cultures (and especially manuscript cultures), such as Peter Beal’s Dictionary of English Manuscript Terminology and Henry Woudhuysen’s work on Sir Philip Sidney, both of which have inspired countless scholarly visits to archives. More recently Sebastiaan Verweij’s The Literary Culture of Early Modern Scotland has reassessed Scottish literary history primarily through a return to manuscript texts, and Angus Vine has explored the ways that manuscript culture fostered early modern theories of knowledge in Miscellaneous Order.

Research on the manuscript culture of early modern English literature has flourished since the early 1980s, when Peter Beal published his landmark Index of English Literary Manuscripts, subsequently published online as the expanded and updated Catalogue of English Literary Manuscripts. As we begin to investigate the Melford manuscript, the four decades of ground-breaking research that emerged in its wake offers rich resources for the kinds of questions we need to ask of it: who compiled it; who transcribed it; where did they get their copy-texts from; are there important textual variants; and what else is in the volume alongside these poems? A detailed study of this text promises to add significantly to our understanding of Donne’s enormous cultural influence, to the textual cultures that transmitted and promoted literary writing, and to our sense of the kinds of value carried by literature through the ages.

He works on sixteenth- and seventeenth-century literary history, with a particular focus on John Donne and Ben Jonson, the circulation of texts in manuscript, and the literary patronage of early modern women. He has published on John Donne Junior, the history of libraries, and early modern letters, and has edited the poetry of Sir Henry Goodere for the John Donne Journal.

Smith is the author of John Donne and the Conway Papers: Patronage and Manuscript Circulation in the Early Seventeenth Century (Oxford, 2014)