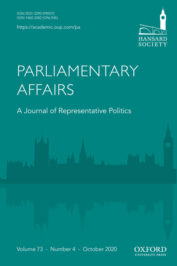 Parliamentary Affairs is a leading, peer-reviewed journal covering all aspects of representation and politics connected to the institution of parliament. The journal is published in partnership with the Hansard Society, created to promote parliamentary democracy throughout the world.

It’s an old truism that a week is a long time in politics, which would probably make 11 months an absolute age during even the most halcyon times. So, reflecting on the lessons to be drawn from the victory of the Conservative Party in the 2019 general election does rather feel like a job for ancient historians rather than political scientists. But there remains much that we can learn from the recent past, and many elements of why we argue the Conservatives won back in December can explain much of their response to the COVID-19 crisis and the current grandstanding over Brexit.

In 2019, all of the major political parties had assumed Brexit would reshape the basis of party support. The problem for Labour and the Lib Dems (who had hoped to hoover up disenchanted Tory Remainers in any number of constituencies), was that the reshaping only really occurred in one direction. Whilst a not insignificant number of voters were more Remain than Conservative, or more Leave than Labour, the Conservatives gained the vast majority of those voters enticed by a prime minister promising to “Get Brexit Done.” By contrast, the Remain vote was inefficiently split between the Lib Dems, the Greens, the nationalist parties, and Labour.

Indeed, Tory insiders have suggested that the true turning point in the general election happened before campaigning began when Johnson concluded a Withdrawal Agreement with the EU-27. This agreement, to quote campaign chief Isaac Levido, “was a real game changer, [it] unified a number of fringes in our voter coalition that we needed to bring together.”

Which brings us to the present predicament that the Johnson government finds itself in over the internal market bill. The 2019 victory was built on the back of having an “oven ready” Brexit deal. Any kind of wrangling that shows this deal to be, at best, parboiled risks pulling apart the shaky coalition that delivered the Tories victory. This is before considering that the Brexit deal trumpeted during the election was only functionally different to a range of deals negotiated by Theresa May and her team due to the very fact that it effectively agreed to locate a customs border between Britain and Northern Ireland.

The main drama of election night itself was the crumbling of Labour’s so-called “red wall,” the aftermath of which is still being discussed and analysed in minute detail. One reading of this is that Labour were undone by the simple fact that they presented a jumbled platform and were presided over by a historically unpopular leader. But that is only a part of the story.

That the election was about Corbyn and Brexit, there is little doubt—but it was also about underlying issues surrounding culture and national identity for which Brexit acted as a filter. And the Conservatives, in managing to pitch the election as a Brexit election—in a way that they had failed to in 2017—appealed to specific voters within this new electoral landscape. Many of whom resided in “red wall” seats and would be considered, classic “old” Labour voters. This, again, gives some indication as to why, over a not uneventful summer, we saw little of the Conservative leader. But, perhaps, why Johnson did pitch up (both figuratively and literally) with his opinion on whether Land of Hope and Glory should be sung at the Last Night of the Proms.

Must the Conservatives win?

These (seemingly) fundamental shifts in electoral geography, led some to see the election result itself as tantamount to Labour’s last rites. But politics can, and has, changed very quickly. Just as 2017 was the election in which everything went wrong for the Tories, 2019 might well have been the year everything went right. But it leaves them with a fragile coalition of support, from the Tory shires to the traditionally Labour North East. Many members of this coalition are voters for whom the Tories might end up being a one-time fling—“a temporary and transactional swing to the Conservatives, rather than a conversion to conservatism.”

Moreover, a common critique of Johnson is that he is a better campaigner than he is statesman. A “break glass in case of emergency” leader that has a broad, if superficial, appeal. When journalist Tom McTague asked Johnson why the 2019 campaign was so dull he responded, “I’m not the artist; I’m merely the subject—it is for you to apply the rich chiaroscuro to your canvas.” And it is this seeming lack of guiding vision that we argue was one of the great strengths of the campaign—it could mean all things to all people.

However, seeing oneself in this somewhat vague way is indicative of something deeper. Of a basic mindset that values common sense over compulsion and “guidance on social contact instead of legislation.” It is an ideology that makes one slow to lockdown a country, and causes one to bristle when asked if the police will be utilised to enforce restrictions.

A “rich chiaroscuro”, then, may be effective for a campaign—but less so in a genuine crisis. In 2019, the Conservatives were dealt a good hand and played it well. In 2020 they—along with the rest us—have been dealt one of the lousiest hands in recent memory. How they have played, and continue to play it will define the Johnson premiership and the fortunes of the Conservative Party for years to come. As we conclude in our chapter, “whether it can cope with the challenges presented by government remains, however, to be seen.”

Dr Sam Power is a lecturer at the University of Sussex School of Law, Politics and Sociology. His work focuses primarily on political financing, online campaigning, party politics, and corruption.

Professor Tim Bale is Professor of Politics at the Queen Mary, University of London School of Politics and International Relations. Tim is also Co-Director of Queen Mary's Mile End Institute and Deputy Director of the think-tank UK in a Changing Europe.

Professor Paul Webb is Professor of Politics at the University of Sussex. His research interests focus on representative democracy, particularly party, and electoral politics.

They are the authors of the article ''Mistake overturned, so I call it a lesson learned’: The Conservatives, available in the Parliamentary Affairs supplement 'Britain Votes: The 2019 General Election'.