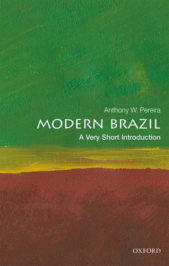 As we approach 15 November, a national holiday marking the end of the Brazilian Empire and proclamation of the Brazilian Republic in 1889, and also a day of municipal elections, many Brazilians may be contemplating what has happened to their country and where it might be heading.

In October 2018 a national populist candidate, Jair Bolsonaro, won the presidency by campaigning on the slogan “Brazil above everything, God above everyone.” Bolsonaro is populist in the sense described by the political scientists Cas Mudde and Cristóbal Rovira Kaltwasser: he embodies a world view “that considers society to be ultimately separated into two homogenous and antagonistic camps, `the pure people’ versus `the corrupt elite,’ and which argues that politics should be an expression of the volonté général (general will) of the people.” An obscure member of Congress for 27 years and a former army captain, Bolsonaro used social media, especially Facebook, Twitter, and WhatsApp, to win the country’s highest office. His untraditional and Trump-inspired campaign channeled the Brazilian public’s frustration with an enormous government corruption scandal and the established political parties, as well as disillusionment with the governments of the centre-left Workers’ Party, which had controlled the presidency from 2003 to 2016.

Bolsonaro offers the usual tropes of national populists—religious nationalism, illiberalism, cultural conservatism, the exaltation of the armed forces (many retired and active-duty members serve in his government), a reverence for the patriarchal family, aggressive anti-Communism, and attacks on globalism and multilateralism, as well as criticism of the mainstream media and its “fake news.” However, in at least two respects he is different from most of his counterparts, who tend to rely on strong party machines and espouse economic protectionism. Bolsonaro has no political party, having fallen out with the colleagues with whom he temporarily allied in the 2018 election. He also campaigned on the promise of implementing ultra-neoliberal economic policies, appointing a University of Chicago alumni, Paulo Guedes, to be his “super minister” of the economy. Guedes pledged to downsize the state, lighten the tax burden, privatize state-owned firms, flexibilize labour markets, and achieve rapid economic growth through neoliberal shock therapy.

That has not happened. Bolsonaro’s government spent much of 2019 enacting a reform of the public pension system in order to halt the growth of the fiscal deficit. Most of the rest of the neoliberal package, including a reform of the tax system, was not implemented. This year the coronavirus pandemic has hit Brazil hard, in part because of President Bolsonaro’s cavalier dismissal of the disease and his refusal to use the federal government to coordinate the public health response in states and municipalities. The country has the second highest number of COVID-19 deaths in the world behind the United States, with over 140,000 deaths officially recorded (at time of post publication; see John Hopkins University COVID-19 dashboard). Many people in crowded low-income neighbourhoods in urban peripheries have found it difficult to self-isolate, and the government was induced to pay an emergency income supplement to the poor of R$600 (about £90) per month for three months, and then extended it for two more months in August and September. The income support now reaches 65 million beneficiaries, or more than 30% of the population of roughly 210 million, and the Bolsonaro administration has proposed to continue it until December at half of its initial value.

“However, despite the economic and public health disasters … his approval rating reached 40%, the highest level of his presidency.”

In the midst of the coronavirus pandemic and the collapse of the economy, neoliberal shock therapy—which was never seriously attempted in 2019—was abandoned. The fiscal deficit, which the super-minister Paulo Guedes promised to reduce to zero in his first year, has ballooned. Gross national debt is expected to reach 93.5% of GDP, the economy could shrink by up to 6% this year, and the official unemployment rate is over 13%.

However, despite the economic and public health disasters, President Bolsonaro has discovered the political benefits of directly supporting the incomes of the poor in a country in which the average wage is only £330 per month. His approval rating reached 40%, the highest level of his presidency, in a CNI poll of 2,000 voters conducted on 17-20 September 2020. The emergency supplement does not explain all of this rise, but it accounts for some of it, and the President has picked much of his new support in the impoverished north and northeast of the country. It may be that President Bolsonaro has decided that neoliberalism is not essential to his national populist movement, and that he can compensate for loss of support amongst higher-income groups with an increase in support amongst the more numerous poor. Just as the anti-corruption plank of his platform was muted with the resignation in April 2020 of his Minister of Justice, former federal judge Sérgio Moro, and revelations of the investigation of possible corruption on the part of his son Flávio Bolsonaro when he was a Rio state legislator, neoliberalism may prove to be a disposable element of this government.

President Bolsonaro’s rule and his movement are likely to go through further changes. If President Trump of the USA fails to secure re-election on 3 November, that could weaken Bolsonaro’s support base. The November municipal elections could see the ascension to office of a raft of opponents of Bolsonaro who articulate widespread indignation at the president’s handling of the coronavirus crisis and his style of rule. Looking farther ahead, the bicentennial of Brazil’s independence in 2022 will probably coincide with President Bolsonaro’s attempt to secure his own re-election. At that point Brazilians will discover whether an incumbent saying “Brazil above everything, God above everyone” can win a second term.

Anthony Pereira is a Professor in the Brazil Institute and Department of International Development at King’s College London. He is the author of Modern Brazil: A Very Short Introduction (OUP, 2020). You can follow him on Twitter as @awynnepereira.

The ever-evolving US Supreme Court