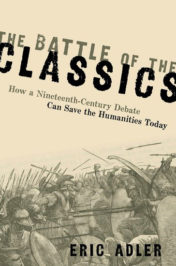 The Battle of the Classics: How a Nineteenth-Century Debate Can Save the Humanities Today

“Nearly everyone seems to believe the humanities are in crisis,” huffed the literary scholar Paul Jay in 2014. But Jay wasn’t sold: his skepticism was sufficiently strong, in fact, that he put the word crisis in scare quotes in his book The Humanities “Crisis” and the Future of Literary Studies. Jay turned out to be one among a prominent collection of professors in the 2010s who gainsaid the crisis-talk surrounding the modern humanities.

A few short years later, does anyone still believe this? Although at the time Jay wrote his book the outlook for the humanities in American higher education was far from rosy, the COVID-19 crisis has accelerated the dire circumstances for contemporary humanistic study. Cash-strapped colleges and universities have begun closing humanities departments and ousting faculty members. Carthage College in Kenosha, Wisconsin, for example, announced the discontinuation of its classics, philosophy, and “great ideas” majors, which will put 23 faculty members out of work. Its president concomitantly proclaimed that “Carthage has always been, is, and will always be a liberal arts institution.” Given that the school boasts majors in accounting, finance, and public relations and has dismantled its classics and philosophy departments, one wonders whether its leaders know what the liberal arts are.

To add insult to injury, Illinois Wesleyan University has recently disclosed the shuttering of its classics department and slated programs in religion, French, and Italian for the chopping block. Who’s the president of Illinois Wesleyan? S. Georgia Nugent, a classical scholar and the 2017 president of the Society for Classical Studies. A few years ago, when Paul Jay was denying the crisis for the humanities, Nugent was composing editorials in favor of liberal learning. Now she’s busy stripping away the humanities from her university.

How has this happened? How have humanistic disciplines such as philosophy and classics—which previously played a dominant role in American higher education—found themselves the odd man out of our contemporary curricula? For decades, conservative critics have blamed the bogeyman of postmodernism. In the aftermath of the 1960s, they claim, radicalized humanities professors transformed their disciplines into vehicles for their left-wing politics. College students, sensing that the contemporary humanities offer little but impenetrable prose and radical ideology, have supposedly fled from the study of such subjects for more practical fare.

Unfortunately, though, the cause of the humanities’ current crisis is far older than critics of postmodern relativism allow—and more baked into the heart of the modern American university. In fact, one must look back to very creation of the American universities in the late nineteenth century to see why their triumph precipitated the marginalization of the modern humanities. The scientizing of our higher education amounts to the root of the problem, and without a deep-seated revolt against this process, the humanities will continue to wither.

From the colonial period up until the Civil War in America, the classical humanities were the lynchpin of higher education. The intellectual and moral inspiration for early American higher education derived chiefly from the Renaissance humanists, who contended that the study of ancient Greek and Roman literary masterpieces—when studied in their original languages—could perfect a human being. The young, they thought, should take in the wisdom of authors such as Homer, Plato, Sallust, Vergil, and Augustine, thereby recognizing their own higher potentialities. Given the paramount influence of Renaissance humanism, the early American colleges possessed almost completely prescribed curricula: they required all students to experience those literary masterworks that could best shape students’ souls.

Many Americans proved acutely critical of this classics-heavy curriculum. But such critics did not make much headway against it prior to the mid-nineteenth century. At this time, a group of reformers whom the historian Andrew Jewett has labeled the first generation of “scientific democrats” began to revolutionize higher education in the US, turning it away from Renaissance humanism toward the professionalized sort of scholarly study emanating from Germany. These scientific democrats aimed to center American higher education around the natural and social sciences, believing that the scientific method could supply the tools to maintain a robust democratic society. They therefore shunned the old prescribed course of studies promoted by the Renaissance humanists in favor of a choose-your-own-adventure curriculum inspired by Darwinism and laissez-faire economics. In 1884, Charles W. Eliot, the president of Harvard University and the most energetic promoter of elective coursework, thus maintained that “In education, as elsewhere, it is the fittest that survives.” Rather than provide for students a vision of a well-educated person based on the masterworks of ancient literature, such scientific democrats promoted a Spencerian fight to the death among the disciplines.

Even casual observers of contemporary higher education in the US should recognize how successful these reformers have been in reshaping American colleges and universities. Just as they had hoped, the natural and social sciences—along with various vocational studies first ushered into the curriculum by the scientific democrats—now rule the roost, and the humanities have been brushed aside.

The triumph of the sciences would spell serious trouble for humanism. The latter, after all, foregrounds the wisdom of the past as the means to shape a student’s character. The sciences, by contrast, promote the creation of new knowledge. And the dominance of the scientific outlook in higher education has turned the modern humanities distinctly un-humanistic. Many contemporary humanities professors no longer even seem to believe in humanism. Thus, the professor of English Stanley Fish can announce that “teachers cannot, except for a serendipity that by definition cannot be counted on, fashion moral character, or inculcate respect for others, or produce citizens of a certain temper.” Likewise, in their scholarly publications such humanities professors don’t foreground the ability of masterworks to provide answers to life’s great questions; rather, they typically focus on minute arcana, as if Homer, Confucius, and Jane Austen can best be studied in a lab coat.

All this underscores the serious and longstanding difficulties for the modern humanities. The dominant Darwinian approach to the college curriculum fights against humanistic values: it devalues the wisdom of the past and esteems disciplines on the basis of their popularity alone. The professionalization of American higher education in the late nineteenth and early twentieth centuries has cut professors off from the humanistic tradition, allowing a literary scientism to flourish that is anathema to the proper goals of humanism. Although obviously the natural and social sciences must play an important part in contemporary American education, we must recognize that for well over a century the deck has been stacked against the humanities.

How can we fight against such longstanding troubles for the humanistic disciplines? A revolt against our Darwinian approach to general education would supply a salubrious start. Rather than encourage a curricular survival of the fittest that by design sidelines the humanities, we must demand a globalized core curriculum—one based on required courses devoted to the study of literary masterworks from manifold cultures. Such books can provide for students the most profound responses to the human predicament, enabling the young to determine a sound philosophy of life. Our scientized universities focus almost exclusively on what the great humanist Irving Babbitt called humanitarianism: the drive to improve the material conditions of the world. They desperately require a balancing emphasis on humanism: the drive to improve the self. Bereft of the humanities, education only accomplishes half of what it should. We cannot, of course, improve the world if we cannot improve ourselves. And the humanities cannot thrive without the spirit of humanism.

Eric Adler is a member of the classics department at the University of Maryland and the author of The Battle of the Classics: How a Nineteenth-Century Debate Can Save the Humanities Today, which has just been published by Oxford University Press. You can follow him on Twitter @ProfEricAdler.