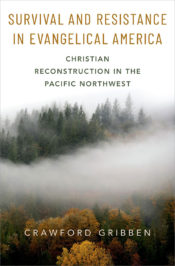 Survival and Resistance in Evangelical America: Christian Reconstruction in the Pacific Northwest

On 7 October, shortly after being hospitalised after contracting COVID-19, President Donald Trump took to Twitter to warn his supporters that “DEMS WANT TO SHUT YOUR CHURCHES DOWN, PERMANENTLY. HOPE YOU SEE WHAT IS HAPPENING. VOTE NOW.”

DEMS WANT TO SHUT YOUR CHURCHES DOWN, PERMANENTLY. HOPE YOU SEE WHAT IS HAPPENING. VOTE NOW! https://t.co/dqvqz6b1WD

The event that occasioned his comment had taken place in Moscow, Idaho, in late September, when members of one of the city’s largest Protestant congregations had gathered to sing hymns in defiance of local social distancing regulations and in front of city hall. Several attendees took videos that showed police detaining Gabe Rench, a member of the community and host of an online religious politics talk-show, for the violation of these rules. That evening, Rench and the other presenters of “CrossPolitic” publicised the incident, asking supporters to share footage of the arrest as widely as they could. As good postmillennialists, members of this community tend to be pretty optimistic—but, even so, they could hardly have imagined that, just over one week later, the incident would become the subject of comment by the President himself, as he shared news of the persecution of American Christians with 87 million followers on Twitter.

Although I have not met Rench, I did spend time with members of his community while doing fieldwork for my forthcoming book, Survival and resistance in evangelical America: Christian Reconstruction in the Pacific Northwest. The community had been established in Moscow in the 1970s under the charismatic leadership of Douglas Wilson. As it grew in number, the community embraced Reformed theology, establishing a second church, and then a new denomination; a classical Christian school, and then an association of such schools; a liberal arts college with an impressive record of sending students into top-quality graduate programmes; and projects in arts and media that have resulted in book deals with publishers ranging from Penguin Random House to Oxford University Press, film and book collaborations with Christopher Hitchens, as well as talk-shows on Amazon Prime and cartoons on Netflix.

Yet, for all their success, the values that have informed these projects have been radically counter-cultural. For the goal of this community is to make Moscow a Christian town—in the expectation that its religious values will one day become those of the entire world. Progress towards these goals has been hard-won, but real enough. Around one-tenth of the permanent residents of Moscow are now members of the community’s two congregations, and, with the support of entrepreneurs and creatives, their values are being disseminated throughout American mass culture.

So, while members of the community might have welcomed the President’s tweet, his support for their cause was, in many ways, ironic. The community that he identified as exemplary of Christianity in the United States of America has very strong views about politics—views that tend not to coalesce with his own. Over the last three decades, Wilson and other community leaders have argued that the best foundation for civil society is to be found in biblical law, and they have proposed a lightly edited version of the programme for Christian Reconstruction that has been so controversial elsewhere. Some of the ideas that community members have mooted—including the suggestion that American slavery was not necessarily wicked—have caused distress and outrage in the locality, with the consequence that many of the more liberal residents of Moscow now boycott the community’s shops (and bar). Of course, as I have already noted on this blog, some of these once outré ideas have gained considerable currency in Republican circles. But, in my fieldwork in this community, in the summers of 2015 and 2016, I did not discover anyone who was planning to vote for Donald Trump. Like others who support the agenda for Christian Reconstruction, the Moscow Christians tend not to look for top-down political solutions, having rejected the political mainstream and the bankrupt agenda of the Religious Right. The President might support the Moscow Christians but they may not be supporting him.

For all that the Moscow Christians might appreciate the president’s interest in their affairs, they are not looking to achieve their goals through national politics. After all, many of these believers have difficulty with the democratic system. What “we call… democracy… Solomon called… foolishness,” Wilson has claimed. Members of the community reject the false dichotomy of two-party politics:

“One faction wants to drive toward the cliff of God’s judgement at sixty miles an hour, while the loyal opposition wants to slow down to forty. Hard-working and soft-thinking Christians bust a gut to get the latter group into power. And then, when they do assume control, they compromise with the ousted group and settle on a moderate and well-respected speed of fifty-eight. But the Bible prohibits establishing a ruler—whether a ruler or judge—who does not fear God.”

For these Christians, the reformation of the church must precede any reformation of the nation at large. “Any serious attempts at cultural reform, based upon ‘traditional values,’ which precede a reformation and revival in the church, should be considered by Christians as worthless.” Indeed, they continue, the “severe problems this nation has do not admit of a political or cultural solution,” for the key to the transformation of America is the gospel. America will be transformed. But, they have argued, “why would we use the grimy little god of politics to try to usher in what Jesus Christ has already purchased on the cross with His own blood?”

For all that community members might appreciate the president’s interest, they are certain that he is not the saviour of American Christianity. But the President’s tweet shows how even those who want to stand at a critical distance from the political mainstream can find themselves caught up in it.

Crawford Gribben is Professor of History at Queen's University Belfast, and is the author of a number of books on the history of puritanism and evangelicalism, including God's Irishmen: Theological Debates in Cromwellian Ireland, Writing the Rapture: Prophecy Fiction in Evangelical America, Evangelical Millennialism in the Trans-Atlantic World, 1500-2000, and John Owen and English Puritanism: Experiences of Defeat.

How will Billy Graham be remembered?

What face masks and sex scandals have in common