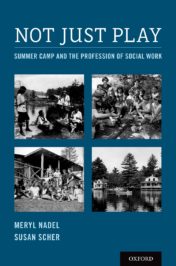 Not Just Play: Summer Camp and the Profession of Social Work

The ballfields are quiet. The lake is placid. The bunks/cabins are empty without towels and bathing suits hung out to dry. For summer camps, this summer season has been rife with challenges, including the difficult decision not to open.

But challenge and change are not new to camps. Over the past century, camps have adapted – often proactively – with innovations that enhance campers’ biopsychosocial development. While camps have long offered enjoyment, adventure, and respite for both children and their parents; they have also contributed far more than play to American society.

By the turn of the 20th century, settlement houses in many areas of the United States began summer programs, bringing impoverished urban children to rural areas for a week or two of health-inducing fresh air and plentiful food. These informal programs soon developed into more structured summer camps, with planned activities and thoughtful programming, often enhancing agencies’ year-round programs in the city. Some camp directors recognized the educational opportunities engendered by the camp milieu. Additionally, settlement camps enabled city children to distance from the threat of tuberculosis and other contagious diseases in their neighborhoods.

In 1924, a remarkable camp was established by social worker Joshua Lieberman. In contrast to most camps of that time, it was openly co-educational and racially integrated. Campers here developed and led their own activities, explored social issues of the day, focused on cooperative rather than competitive experiences, and utilized group problem-solving.

The growth of group work as a method of social work reinforced an emphasis on democratic decision-making and values clarification in summer camps. During the 1960s, these underpinnings were reflected in an openness to social change and social action. Camps such as Minisink and Wel-Met explicitly engaged campers and staff in the civil rights and other social justice movements. Such encounters are recalled by former campers and staff as crucial in shaping their perspective on the world. This emphasis on social change persists at camps such as the Highlander Center’s Seeds of Fire program and Wavy Gravy’s Camp Winnarainbow.

Beginning in the early 1920s, at least two camps dedicated to children with social-emotional challenges arose: the University of Michigan Fresh Air Camp and Camp Ramapo. Although many camps of this type continue to thrive today, the concept of inclusion – integrating children with disabilities into the general camp population – is now receiving increased attention. However, an inclusion model was pioneered by Druce Lake Camp as early as 1915! About two-thirds of its referrals came from social agencies and clinics. Organizers paid careful attention to group composition so that no cabin group included more than one or two time-intensive campers. Another model, developed in the 1950s, involved year-round clubs (small groups) that then attended camp together. The clubs often consisted of a group of typical children with a single disabled child. Since 1970, an updated version of inclusion has developed at the Ramah camps and elsewhere. Initially grouped in their own cabins, campers with disabilities are now partially or totally integrated with other bunks of campers. Specialized staff insure that each camper’s needs are met.

As the COVID-19 pandemic impacted the United States and Canada, innovation by summer camps was again needed. Organizations including the Centers for Disease Control and Prevention and the American Academy of Pediatrics issued guidance on how children’s programs could function safely. Some camps decided to suspend summer programs early on, while others considered options for holding camp. Social workers and others conferred at length regarding alternatives. These camp leaders carried out risk assessments as they evaluated the ramifications of their decisions.

Howard Blas, of the Ramah camps, described the change that he and fellow camp leaders experienced. At first, it seemed that residential camps in their isolated rural environments could function, essentially in quarantine, while day camps, with their populations commuting daily, would pose greater threats. However, discussions then turned to the risks of an outbreak as well as the restrictions that would be needed. Camp professionals asked each other, at what point does camp stop looking like camp? Equity was also an issue: how could they ethically exclude high-risk campers? In the end, it appears that most non-profit residential camps cancelled their sessions. On the other hand, many camp organizers decided that risks for day camps were manageable since the camps could assess symptoms daily. Leaders also considered the child care functions of day camps. Some have cancelled while others are meeting this summer.

Many residential camps decided to offer what is now termed virtual camp. According to Cara Allen of Experience Camps, camp professionals recognized that substituting computer screens for camp activities would be insufficient and inappropriate. Thus, these camps are sending campers a care package with hands-on activities and camp memorabilia such as a camp t-shirt, a necklace, a pillowcase to decorate, and other items. They will also hold virtual bunk reunions and limited additional activities via Zoom.

Summer camps have innovated and adapted to changing societal circumstances in the past and currently. Rising to challenges, they have offered children novel opportunities, protected them from harm, and created original models for summertime growth, support, and informal education.

Meryl Nadel is a professor of social work at Iona College. She is the coauther of Not Just Play: Summer Camp and the Profession of Social Work, published by Oxford University Press.