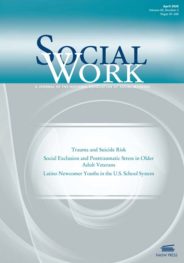 Social Work is the premiere journal of the social work profession. Widely read by practitioners, faculty, and students, it is the official journal of NASW and is provided to all members as a membership benefit. Social Work is dedicated to improving practice and advancing knowledge in social work and social welfare.

Anderson Al Wazni is a white Muslim woman, Stefani Baca-Atlas is a US-born Latina, and Melissa Jenkins is a biracial Black woman; all three women are doctoral students. They experience the world in different ways and have worked together to share their perspectives on challenges and opportunities for non-Black students with marginalized statuses to work towards racial justice in the academy. All three women acknowledge that they present as hetero, cis-gen women living in a heteronormative environment, and their opinions on race and racism are as unique as their identities are not meant to represent the views of other marginalized students. The purpose of this piece is to provide white colleagues with a view into the world minoritized students navigate and to offer hope and solidarity to Black students and minoritized allies.

Within academia at large, the presence of tenured Black faculty, students of color, anti-racist courses and course material are sorely lacking. Like every institution in our nation, social work is steeped in systemic white supremacy. The governing bodies of the social work field demand that both educational programs and professional ethics directly confront racism and actively deconstruct it, yet academic social work has largely failed to realize the altruistic ideals with which the profession identifies. Black Lives Matter ignited a fire over the summer, but will a shadow fall on this movement as the semester continues? As universities are forced to grapple with the multisystemic consequences of a worldwide pandemic, who will continue to question why COVID-19 disproportionately burdened Black and Brown communities? If history is an indicator of what lies ahead, folks with minoritized identities will play a significant role in maintaining focus on issues related to anti-Black racism and racial justice within social work education, even though that role is emotionally and intellectually burdensome.

Students’ position in the academic hierarchy often leave them with minimal voice; however, issues of racism disproportionately burden this class of people. Forty-six percent of doctoral students are from “historically underrepresented groups” (pp. 3) (vs. approximately 33% of faculty) (Council on Social Work Education [CSWE], 2018). Although diversity in the academy has increased in the past several years, the perspective of minoritized students is often tokenized, misrepresented, or forgotten altogether (CSWE, 2016, 2017, 2018). This moment calls for opportunities for students with historically oppressed identities to engage with the academic systems in ways that promote anti-racist practice, and for non-Black marginalized students to work in solidarity with Black students to dismantle racism in the academy.

The first way that minoritized allies can support Black colleagues is by naming anti-Black racism. This can feel uncomfortable or contentious. For instance, there has been pushback regarding the use of BIPOC in recent institutional statements addressing racism. People of marginalized backgrounds may more readily understand that terms like “POC” (Person/People of Color) or “BIPOC” (Black, Indigenous, and People of Color) have a place, and that there are situations that call for naming anti-Black racism because a general oppression framework is not specific enough. These types of frameworks lack an understanding of the specific sociocultural history and contemporary oppression and violence that shapes Black culture and survival. Other marginalized people can help illuminate the heterogeneity between cultures so that Black people do not fall into an essentialist category of simply “not white.”

Second, people with minoritized identities can interrogate complicity in anti-Black racism in personal and academic settings. Questions about complicity begin in personal attitudes, beliefs, and practices. Racism as a behavior is a learned mentality and it must be actively unlearned. Marginalized students can consider different perspectives and cultivate a sense of value for cultures other than their own. Art, books, and podcasts from people with different marginalized statuses can inform various aspects of research ranging from personal hypotheses to methodology. Students may also find themselves more likely to intervene in racist situations based on stronger empathy with people from different cultures.

Minoritized allies can also interrogate their collective practices. For instance, within the Muslim community, there is a wide representation of different racial and ethnic groups and that anti-racism is a value rooted in the Quran. In reality, mosques are deeply divided. Moreover, despite the Black community being the largest demographic of Muslims in the United States, the community is not well represented within Muslim culture. For those who critically grapple with the gaps in their intentions and unintended consequences, there is an understanding that the intensity of anti-Black racism has a depth and pain that deserves its own recognition. Focusing attention to anti-Black racism in a time of intense upheaval does not detract from the oppression of others.

Similarly, in academic settings, students with marginalized identities can critically analyze the space they occupy. In response to anti-Black racism, some institutions are working to integrate anti-racist pedagogy. In “anti-racism” meetings, white people may see the presence of a Latinx person as a check in the BIPOC box; however, this person cannot speak for people who are not in the room. Non-Black marginalized folks must explicitly acknowledge the absence of Black colleagues in meetings meant to address anti-Black racism; further, marginalized students must examine their contributions to hostile or toxic environments and do the work to create environments that feel safe for our Black colleagues to engage even during these traumatic times.

Third, minoritized allies can respond when they witness racist behavior. This critical moment may have created space for some minoritized students to respond to microaggressions and overt racism in the moment; however, the process may continue to be anxiety inducing because white supremacist culture is so insidious that it is beyond reproach. Still, non-Black Students of Color have an opportunity to use privilege to challenge the status quo and push the academy to catch up and beyond the current social and political mores by responding, questioning privileged perspectives and assumptions, and supporting Black folks when they decide to take a stand.

An important note is that the ability for the other marginalized people to safely respond may be compromised. A white Muslim holds certain power, and as such, can step up and be more vocal in times where others cannot. In other contexts, a visibly Muslim woman may still be a target and vocally responding may not be a safe option for her. Those moments are rare, but when they do occur, expressing a sense of solidarity with the targeted individual can be helpful. For instance, microaggressions within seemingly “liberal” spaces are psychologically damaging. Being targeted without anyone bearing witness weighs heavy on your mind. These situations can be disruptive psychologically and emotionally.

Some challenges may feel insurmountable. Many would like to act quickly and purposefully; however, many scholars from marginalized communities hold precarious positions in the academy. Unfortunately, freedom of speech does not equally apply to all people, and this inequality is further embedded within the hierarchy of colleges and universities. There is often minimal room for BIPOC to respond when they witness racism. When BIPOC are forced to stand up for themselves in those situations, they may respond with carefully chosen and precise words, but the feelings underneath the surface are anything but calm and collected. White people can help ease anxieties by acknowledging power differentials, being open to constructive criticism, and acting in solidarity with BIPOC in the moment.

Finally, academic communities must work together to promote BIPOC inclusion and wellness. The social work academy must actively engage BIPOC voices, and they must do so while white folks participate in parallel processes of working out their emotions without BIPOC present. Centering whiteness, claiming “not to see color,” or floating the validity of any tangent of “all lives matter” are harmful to BIPOC. However, several opportunities exist to promote wellness and inclusion.

One of which is to hear and acknowledge people when they risk sharing the ways they have experienced racism rather than gaslight them. Validating students’ experiences rather than negating those feelings will go a long way in improving inclusion and wellness of BIPOC students. Creating environments where people feel equal rather than less than will promote culture where minoritized students feel strong enough to carry on the fight for racial justice. This fight will be more important than ever in the coming months as the nation and universities cope with COVID-19 and national elections.

Anderson B. Al Wazni is a second year doctoral student in the School of Social Work at UNC Chapel Hill, as well as an adjunct instructor at Smith College and public educator through AHEC. Her research interests include climate change and its intersection with conflict, displacement, and health disparities with a particular focus on women and children. She is also an advocate for Muslim representation and an anti-Islamophobia educator, as well as member of the UNC Center for Middle East and Islamic Studies.

Stefani N. Baca-Atlas is a fifth year, first-generation doctoral student and adjunct instructor at the School of Social Work at the University of North Carolina at Chapel Hill; and a member of the doctoral student committee of the school. Her research focuses on interpersonal, political, and structural violence, migration, and trauma on health disparities among global and domestic populations. Baca-Atlas is an advocate for racial justice, particularly in higher education, as an intervention to create sustainable economic equity and promote critical consciousness.

Melissa Jenkins is a third-year doctoral student at the University of North Carolina at Chapel Hill School of Social Work. She holds a bachelor of social work degree from Meredith College and earned her master of social work with a concentration in community, management, and policy practice from UNC-Chapel Hill. During her time in the program, she worked with a statewide project to increase awareness and prevention around human trafficking in North Carolina and is currently working with a research team to implement an anti-sex trafficking program in public schools. Jenkins's research interests including trauma-informed interventions and sex trafficking prevention and services coordination for people with intellectual and/or developmental disabilities.

Can children’s rights be the scaffold for love in the care system?