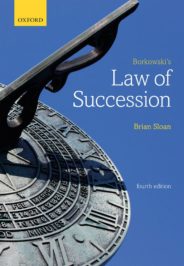 It is a basic rule of English law that a person who kills someone should not inherit from their victim. The justification behind the rule, known as the forfeiture rule, is that a person should not benefit from their crimes and therefore forfeits entitlement. Many other jurisdictions have the same basic rule for fundamental reasons of public policy, including the need to avoid incentivising homicide. Importantly, however, Parliament passed the Forfeiture Act 1982 to give courts in England and Wales discretion to modify the application of the rule in certain cases, so that some people could inherit from those they had killed after all. Such modification is also possible in some other jurisdictions: It allows judges to consider individual circumstances where the blanket application of a forfeiture rule would cause injustice.

Sally Challen was convicted of murdering her husband in 2011. Challen killed her husband Richard with a hammer while suffering from a psychiatric illness apparently caused by his abuse. If that conviction had stood, she could not have benefitted under the intestacy rules applicable where a deceased person leaves no will, as she usually would as a spouse. The forfeiture rule would have applied unmodified because the Forfeiture Act prevents modification where someone “stands convicted of murder.” But the Court of Appeal overturned her conviction in 2019 because of psychiatric evidence suggesting she had been suffering from previously undiagnosed personality disorders at the time of the killing. Her guilty plea to the less serious offence of manslaughter by reason of diminished responsibility was later accepted.

Because of the original application of the forfeiture rule, Mrs. Challen’s sons had inherited their father’s estate instead of her. Challen did not want to recover the property from them for herself. But in recent court proceedings (Challen v Challen), she did seek modification of the rule to allow her sons to recover the inheritance tax paid because their inheritance had come directly from their father rather than via her.

In exercising his discretion to modify the rule the judge took into account factors including the deceased’s violent, humiliating and isolating conduct toward his wife. The judge was also satisfied that the claimant loved the deceased very much, despite killing him. The judge emphasised that the facts occurred over 40 years and “involved the combination of a submissive personality on whom coercive control worked, a man prepared to use that coercive control, a lack of friends or other sources of assistance, an enormous dependency upon him by the claimant, and significant psychiatric illness.”

A particularly important aspect of the case was that Challen’s husband “undoubtedly contributed significantly to the circumstances in which he died,” since the judge was satisfied that “without his appalling behaviour over so many years, the claimant would not have killed him.”

Clearly, the judge responded very sensitively and carefully to the facts. He anxiously emphasised that his decision did not mean that all victims of coercive control who kill the perpetrators can expect a total disapplication of the forfeiture rule. The judge asserted that “the facts of this terrible case are so extraordinary, with such a fatal combination of conditions and events, that [he] would not expect them easily to be replicated in any other.” The expectation of relief may nevertheless be difficult to rein in in future cases.

Some may consider it controversial that the forfeiture rule can be modified at all in a case like this. But the acceptance of her plea inherently demonstrates that Challen’s culpability was limited, and that was for reasons associated with the deceased’s own conduct. The very point of the 1982 Act is to relieve the effects of forfeiture notwithstanding the fact that the deceased was unlawfully killed by the offender: If Challen had not been criminally responsible for her husband’s death, the rule would never have applied in the first place. It is also worth emphasising that Sally Challen did not inherit in substance, and her motivation in improving her sons’ position was largely selfless.

While the result appears correct, sadly the case of Sally Challen will not be the last occasion on which the phenomenon of coercive control and its consequences will come before the courts, however much the judge emphasised the extraordinary facts.

Brian Sloan is a college lecturer in law at Robinson College, University of Cambridge.

Women in law: a legal timeline