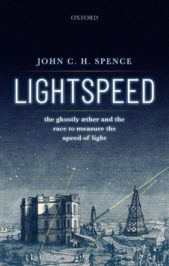 Lightspeed: The Ghostly Aether and the Race to Measure the Speed of Light

Scientists deal with mysteries. As Richard Feynman once commented:  “Science must remain a continual dialog between skeptical inquiry and a sense of inexplicable mystery”.

Three examples: it is profoundly mysterious as to why mathematics can so accurately describe our physical world, and even predict events, such as the motion of the planets or the propagation of radio waves from earth to spacecraft.  The theorems of mathematics are not normally thought to derive from properties of the real world (some philosophers think they do), but are more like a very elaborate game of chess. Secondly, it is entirely mysterious that light and radio waves can travel through outer space, where there is nothing to support them. Yet here mathematical metaphors (called Maxwell’s equations) work well. James Clerk Maxwell derived his equations from a mechanical model of a mysterious ghostly invisible vortex foam they called “the aether”, which was supposed to be at absolute rest, filling the entire universe. A final mysterious and unexpected connection – attempts to locate this stationary aether led most improbably to Albert Einstein’s equation relating mass and energy, the basis for nuclear power.

The light reaching us from distant stars is indeed transported across an empty vacuum, and takes time to get here, so that when we look up at the stars we are looking back in time.  Yet this idea, that light travels at a finite speed was resisted until quite recently. It took root only with the first approximate measurement of its speed by Ole Roemer in 1677, in one of the greatest experiments in the history of science. He did so use Galileo’s telescope to observe the moons of Jupiter. Galileo had suggested using the moon Io as a clock, as it eclipsed behind the planet every 42.5 hours, since the eclipses were visible from anywhere on earth. In this way sailors could keep track of time back home, and so find their longitude from the time difference between noon at home, and local noon, when the sun was overhead (longitude is the distance you might fly around the equator, when jet-lag and time difference tells you how far you’ve gone). Roemer noticed that these eclipses were sometimes about ten minutes late, due to the finite speed of light. From this delay, Christopher Huygens and Isaac Newton were able to make the first reasonably accurate estimates of the speed of light, using the approximate diameter of the earth’s orbit.

In earlier times, it had been natural for philosophers to imagine that the earth was at the center of the universe, orbited by the sun (the Greek philosopher Aristarchus was perhaps the first, before Copernicus, to suggest that the earth orbits the sun). By the eighteenth century, the idea that the sun lay at the center of the universe was widely accepted, and was therefore the only thing truly “at rest”. The night sky was seen to consist of patterns of stars (called “constellations” – Orion, Big Dipper) which moved across the sky as the earth rotated about its axis. Wandering across this fixed background of distant stars at rest were the planets, distinguished by their irregular paths. But the idea of a fixed background was itself called into question when astronomers observed super-nova explosions and moving stars. Johannes Kepler, a mystic and a firm believer in astrology, had shown that the planets move in elliptical orbits in 1619, a great discovery based on Tycho Brahe’s accurate measurements. Newton used, but did not acknowledge, Kepler’s finding (and the inverse square law attributed to Robert Hooke) to develop his theory of gravitation.

Putting these ideas together – a finite speed of light and an absolute, God-given aether at rest – led to the most difficult problem of all. How can this rest-frame be identified and located, and is it the stationary frame against which the speed of light is to be measured? If so, we might expect an aether headwind (or tailwind, six months later), as the earth speeds through it around the sun at about 67,000 mph. Is this frame somehow fixed to the remote stars, or to our sun, or even, most improbably, to the earth (rotating with it)? And, like the headlights on a fast car at night, shouldn’t the speed of the light be added to the speed of the car, the light source? The first American to win the Nobel prize, Albert Michelson, tried hard to locate the aether at Case Western University using an optical interferometer he had invented, but failed, leading him to almost give up research in despair. He found that the speed of light was the same in every direction and in all seasons – no headwind! Most puzzling of all were the measurements of the speed of light in Paris by Léon Foucault and Hippolyte Fizeau, which confirmed the existence of an aether according to an earlier theory of Fresnel. And the contradictory prediction Maxwell had made that the speed of light did not depend on the speed of its source.

These were the questions which nineteenth century physicists struggled with, leading to a true crisis in physics, as pointed out by Lord Kelvin in a famous address in 1900. Albert Einstein alone was fully able to make sense of all this contradictory information in his famous 1905 paper on relativity, and later, to his famous equation E=mc^2. This was the equation, showing that mass is a form of energy, which was needed to explain the nuclear reactions which power our sun and the stars, in addition to nuclear weaponry. He did so by abolishing the aether altogether, showing that all motion was relative (clever students, leaving London around this time would ask the stationmaster “Does Oxford stop at this train?”).

In his superb history of science and the romantic poets in the early nineteenth century, Richard Holmes describes vividly that Age of Wonder. That the failure to locate the aether and any frame of absolute rest in the universe could lead to an understanding of the origin and fate of stars and of nuclear energy led surely to the beginning of a second Age of Wonder, with the birth of both relativity, and quantum mechanics, our deepest mystery.

John C. H. Spence FRS is Snell Professor of Physics at Arizona State University, where he teaches condensed matter physics with research in biophysics. He is currently Director of Science for the National Science Foundation's eight-campus "BioXFEL" consortium. This is devoted to applications of the recently invented hard x-ray free-electron laser to structural biology, providing movies of molecular machines at work with femtosecond time resolution. John is the author of texts on electron microscopy, and a keen musician, pilot and sailor.