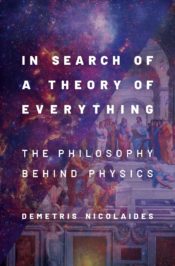 In Search of a Theory of Everything: The Philosophy Behind Physics

According to Aristotle, Zeno of Elea (ca. 490 – ca. 430 BCE) said, “Nothing moves because what is traveling must first reach the half-way point before it reaches the end.”

One interpretation of the paradox is this. To begin a trip of a certain distance (say 1 meter), a traveler must travel the first half of it (the first 1/2 m), but before he does that he must travel half of the first half (1/4 m), and in fact half of that (1/8 m), ad infinitum. Since there will always exist a smaller first half to be traveled first, Zeno questions whether a traveler can ever even start a trip. The paradox is this: while on the one hand, Zeno’s argument, which questions the very ability to even start a trip, is logical; on the other hand, all around us we see things moving. Hence, either Zeno’s reasoning is flawed or what we see is false.

Proposed solutions have often aimed to find a flaw in Zeno’s reasoning. However, empowered by Heisenberg’s uncertainty principle of quantum mechanics, we’ll argue in favor of Zeno that at best, the phenomenon of mo­tion is experimentally unverifiable! The uncertainty principle discusses how nature limits our ability to make exact measurements regardless of how smart or patient we are or the sophistication of our experimental apparatus. A dramatic consequence of the uncertainty principle is this: observations are disconnected, discrete events; consecutive observations have time and space gaps—we can observe nature only discontinuously. Roughly speaking, it is as if we are observing nature by continuously blinking—our observations are discontinuous, dotted, intermittent, quantum! The concept of continuity in observation must be dismissed. It is a false habit of the mind cre­ated by the observations of macroscopic (daily) phenomena such as, for example, a flying arrow, for which the space and time gaps are undetectably small (due to the arrow’s relatively large mass), although not zero, giving the illusion of continuity in observation. Discontinuity in observation however cannot be ignored when trying to observe microscopic phenomena such as tiny-mass electrons. And without the ability to observe continuously, motion becomes an ambiguous phenomenon. How so?

Motion occurs when during a time interval a particle (e.g., an electron) changes positions with regard to some observer; a particle should be now here and later there in order to say that it moved. But since (according to the uncertainty principle ) nature does not allow us to keep a particle under continuous observation and follow it in a path, and also since a particle is identical to all other particles of the same family (for example, all electrons are identical), it is impossible to determine whether, say, an electron observed in one position has moved there from another position, or whether it is really one and the same electron with that observed in the previous position, regard­less of their proximity. Since observations are disconnected, discrete events—with time (and space) gaps in between, during (and within) which we don’t know what a particle might be doing—subsequent observations of identical particles might in fact be observations of two different particles belonging in the same family and not observations of one and the same particle that might have moved from one position (that of the first observation) to the next (that of a subsequent observation). Without the ability to determine experimentally whether a particle has changed position, its motion—and motion in general—is a questionable concept.

In summary, without the ability to keep a particle under continuous obser­vation, it is impossible to establish experimentally its identity, and therefore it is also impossible to experimentally verify that it has moved. In a sketchy analogy, because of the uncertainty principle, observations of tiny particles happen like so: you see a pawn on a square of a chess­board. Then you close your eyes for a bit. Upon reopening your eyes, you see a pawn on another square. Now, since you don’t know if your observations are of the same pawn (recall, pawns, like electrons, are all identical), and also since you haven’t really seen any pawn moving (for your eyes were closed between observations), in strict truth, a pawn’s (like an electron’s) motion is, to say the least, ambiguous. The analogy is not perfect because unlike a pawn, which appears at rest when observed, an electron is observed neither in motion nor at rest—just that it exists somewhere when observed.

Indeed, motion is not an experimentally verifiable phenomenon. Speak of the illusion of the senses.

Demetris Nicolaides is an award-winning professor of physics at Bloomfield College. He has written two books, many articles in peer-reviewed journals, and presented his work at conferences nationally and internationally. His scientific research covers a broad range of diverse topics—from theoretical physics, to observational astronomy, to philosophy. He is a member of the American Physical Society, the Astronomical Society of the Pacific, and the International Association for Presocratic Studies.

Ascending to the god’s-eye view of reality

Why politics is so polarized, even though Americans agree on most key issues