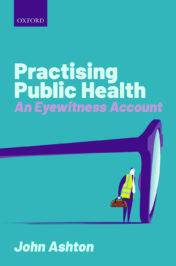 One of the remarkable achievements of the past hundred years has been the reduction of the global toll of death from infectious disease. The combination of applied biological science, improved living and working conditions, and standards of living, together with the benefits of planned parenthood, have transformed the health landscape for millions of people, not least in the developed world. Unfortunately, this led to the belief that these developments had led to the disappearance of infectious diseases as major public health issues with a resulting rundown of public health systems especially in the decades following the Second World War.

The stark message of the current global pandemic of COVID-19 is that we can never afford to lower our guard; that nature has many more tricks up its sleeve, especially in the form of novel forms of infection, especially those emerging where the delicate ecological balance of populations and their habitats is disrupted by poverty, urbanization, and the incursion of people into the territory of other species with their own unique commensal organisms.

In 1918, as the First World War was drawing to a close, the so-called Spanish Flu was brewing in army mobilisation camps across the United States. The first documented influenza cases occurred in the poverty-stricken rural county of Haskell, in Texas, where a local family doctor noticed the occurrence of a stream of atypical respiratory attacks of varying severity. His efforts to alert the public health authorities were of no avail and within months the influenza virus had spread throughout the military bases around America. In due course it made its way to the trenches of the Western Front in Europe, killing thousands on both sides of the conflict. Having seemed to burn itself out during the summer months, the epidemic returned with a vengeance in September 1918, sweeping around the world and leading to the deaths of between 50 and 100 million, mostly younger, people during 1918/19. A further, third wave in 1920 turned out to be much milder, reflecting the rise of some level of immunity among the human herd and probably an attenuation of the virus itself.

Since that time our knowledge of viruses has increased substantially and vaccines have been developed to protect human populations against the most common circulating strains of the influenza virus. Nevertheless, serious pandemics have occurred from time to time, notably in 1957 and 1968, carrying off tens thousands of vulnerable, usually older people. In the meanwhile, the health policy mindset of politicians and medical leaders had tuned out of a focus on infectious disease as being something for the history books to be replaced by a concern for heart disease, cancer, for long term conditions and the diseases of an ageing population. Nature’s surprises that began in the 1980’s should have been a wakeup call to the effect that classical public health will always have the potential to be catastrophically contemporary.

In the United Kingdom, the first warning that we were in danger of failing to keep on top of the basics of public health came in the 1980s with a salmonella outbreak in a Yorkshire psychogeriatric hospital that led to 19 deaths and an outbreak of Legionnaires disease in a Stafford hospital that led to 22 deaths. Although the government took measures to strengthen our public health resilience, these incidents were a portent of what was to come.

Beginning with Bovine Spongeiform Encephalitis ( Mad Cow disease) in 1986—followed by Avian flu in 1997, Severe Acute Respiratory Syndrome (SARS) in 2002, Pandemic H1N1 Swine Flu in 2009, and Ebola in 2014—a whole succession of novel infections with origins in other animal species began infecting humans. The terrorist attacks on the World Trade Centre in New York in 2001 reinforced the need for disaster and emergency preparedness, including that for incidents involving biological and germ warfare agents. This led to a renewed emphasis on planning and resilience for a range of eventualities.

Tragically the global economic crisis and meltdown of 2008 had ramifications for public spending, leading to a decade of austerity in which some countries, including the United Kingdom, took their eye off the public health ball. In 2020 with the advent of the most serious global pandemic for 100 years the ensuing weaknesses were exposed at great human cost.

The aphorism that those who forget their history are destined to repeat it has never seemed more apt.

John Ashton has had extensive experience of bridging both academic and practical worlds, and has been associated with some of the most celebrated public health interventions of the past 30 years in Europe and globally through collaborations with WHO and municipalities. These include action to tackle teenage pregnancy, HIV/Aids, and a range of other significant disasters and health emergencies. He was one of the founders of the WHO Healthy Cities Project, established the first UK Public Health Observatory, the first large scale syringe exchange programme and is known internationally for his work on Health Advocacy.