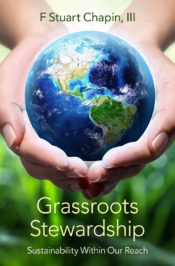 Grassroots Stewardship: Sustainability Within Our Reach

Over the last 50 years, human population has doubled, and global trade has increased ten-fold, drawing more deeply on Earth’s natural resources, warming the climate, and polluting the global environment. If current climate trends continue, a third of the global population will live in places warmer than the heart of the Sahara Desert 50 years from now. Given the likely migration response to these and other changes, today’s youth will likely experience massive environmental and societal shocks during their lifetimes that were previously viewed as only distant risks to future generations. If we care about our children’s future, now is the time to fix this problem.

It is ironic that, as patterns of global degradation become more conspicuous, humanity has become less successful in curtailing planetary degradation. People don’t deliberately degrade Earth—our only home—but rather degrade it as a byproduct of efforts to improve people’s material lives in the short term. I used to think it was government’s job to tackle large-scale, long-term problems like these, but government often does a poor job of it for many reasons, including short time horizons (two to four-year election cycles, daily stock market fluctuations), vested interests that finance election campaigns, and limited spatial scale of concern (a politician’s district or, at most, his nation).

Solutions begin at home and actions by individual citizens—especially in developed nations—can reverse these trends and contribute to a more sustainable future. On average, those of us living in developed nations consume 32 times more energy and other resources than does the average person in the developing world. We can be very effective in reducing individual impacts on the global environment.

In 2019, 68% of people surveyed in developed nations viewed climate change as a major threat. Nonetheless, many people do not take actions that would reverse this trend because they think it would impoverish their lives. But citizens can reverse the trend of global environmental degradation, while improving their daily lives. It’s not that hard. Here’s a starting point:

If people who are concerned about the future act responsibly on its behalf, we can transform the world.

F Stuart “Terry Chapin III, is a professor emeritus of ecology at the University of Alaska Fairbanks. He is a member of the U.S. National Academy of Sciences and the 2019 laureate of the Volvo Environment Prize for his research on Earth Stewardship.

Bring living waters back to our planet