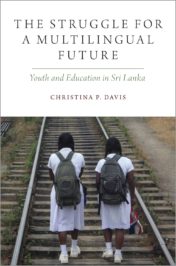 The Struggle for a Multilingual Future

Today’s Sri Lankan young adults grew up during the 26-year civil war between the Sri Lankan government and an insurgent group, the Tamil Tigers, between 1983 and 2009. People living in the Sinhala-majority south were far from battlefields in the north and east of the island, but Tamil minorities everywhere lived under ethnic tension and discrimination. From 2007 to 2008 I conducted anthropological research on language and education in Kandy, a large city in the central highlands. When I first met Anitha, a Tamil Hindu, she was a 14-year-old student at a leading multilingual government school who dreamed of becoming a doctor. I was impressed by her poise and confidence. She got high grades in all her subjects and was also well liked and respected by her classmates. Now Anitha is a 27-year-old information technology professional living in Colombo. She spoke to me about how the war impacted her childhood and shaped the adult she has become.

Anitha was quick to tell me that she never experienced any direct violence. The only major incident in Kandy was the 1998 bombing of the Temple of the Tooth, she said, so it was one of the safest cities at the time. But she, her mother, and her younger sister constantly worried about her father, a high-ranking officer in the Sri Lankan army. War coverage on the news would throw them into a panic, and she had recurring nightmares of her father returning home in a coffin. Afraid to be at home alone, they were startled by even the smallest sounds in the night. But she didn’t show her stress to others; she became a “very social and funny person to hide my inner wounds.” It was only once her father had retired from the army that she was able to feel happiness. Anti-Tamil discrimination was a constant when she was a child. She noted that even though Tamils like herself from the hill-country region were not involved in the war, majority Sinhalas considered all Tamil people to be Tigers or “terrorist blood.” Sinhala teachers at her school discriminated against Tamil students, discouraging them from joining the sports teams and rarely selecting them for coveted prizes in English, drama, and choir. Most of her Sinhala classmates were nice, but there were narrow-minded girls who would whisper about them when they walked by.

After finishing grade 13, Anitha made several attempts to get into one of Sri Lanka’s competitive public universities, but narrowly missed the required exam scores. She opted to study information technology at a private university in Colombo and has now been working in the city for a few years. Last year she married a young Tamil Hindu man who also attended a top Kandy school. Though the war is over, she said the discrimination she faced as a child is still present. Her old classmates work in offices now, but their mentality is the same. She noted that anti-Tamil sentiment “will take some generations to fade away.” On the street in Colombo, it is still best “not to show you are Tamil.” Tamil women have stopped wearing bindis on their foreheads, and people are careful about speaking Tamil. She explained that Sinhalas have even told her to stop speaking Tamil because they couldn’t understand what is being said. Friends and coworkers have referenced the army’s defeat of the Tamil Tigers in her presence. Once, when she mistakenly used the Sinhala word for tiger instead of leopard, a Sinhala woman retorted that there are no longer any Tigers in Sri Lanka as they have been driven out of the mother land.

As a child Anitha was ambitious and optimistic. She would talk to me in Tamil and English about her plan to study medicine in Sri Lanka or abroad before eventually returning to Kandy. When I mentioned her past optimism, she said, without skipping a beat, “Still I am optimistic about my future.” She told me with regret that she had given up on becoming a doctor. I said that I had the same ambition when I was a teenager, and she replied, “Perhaps it is the dream of the age group . . .” She told me that her and her husband’s best chance for a comfortable life is to go abroad, possibly to Canada or Australia. They are not just seeking job opportunities but also respite from discrimination. “If you achieve something in Sri Lanka,” she pointed out, “they won’t say a Sri Lankan did it. They will say a Tamil did it.” When I asked if she could be happy if she stayed in Sri Lanka, she said she had a gut feeling she would be happy there as well. In fact, she still fantasized about returning to Kandy, which she described as an ethnically mixed city where people have strong family values.

Anitha said being a minority in Sri Lanka is a challenge. But when people tell her she can’t complete a task, she simply works harder. She shows them she isn’t weak and believes “nobody can stop me.” Back in 2008, I wondered if her optimism wasn’t a product of her youth. But she clearly has the same positive outlook today. And, like the schoolgirl who used to read Harry Potter books with gusto, she is still trying to figure out what kind of future will be possible for her.

Christina P. Davis is an associate professor of anthropology at Western Illinois University. She is the author of The Struggle for a Multilingual Future: Youth and Education in Sri Lanka.

Why we should revive dead languages