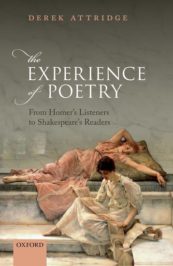 The Experience of Poetry

Panathenaia Festival, Athens, June 419 BC: the Greek rhapsode Ion performs the poems of Homer before a huge, enthusiastic audience.

Is there a historical connection between these events 2,400 years apart? Western poetry had its beginnings in oral performances in Greek palaces by poets who were also composers and singers. Their most famous compositions, the epic tales of the Trojan Wars, were passed on with variations from generation to generation until the invention of writing led to the establishment of fixed texts. A new breed of performers, called rhapsodes, were then able to learn them by heart and present them—now as spoken or chanted poems, not songs—at the great festivals of Greece.

The rhapsodes, in gorgeous costumes, recited sections of the Iliad and Odyssey, and moved a vast audience—Plato says 20,000—to tears. We know most about a rhapsode named Ion because he features (rather unflatteringly) in one of Plato’s dialogues. Ion is on his way to perform at the Athenian festival held every June, the Panathenaia, when Socrates interrogates him—perhaps in 419, when Socrates was around 50.

Greek festivals continued to flourish for many centuries, disappearing only in the fourth century AD, and performances of poetry took place at many of them. Another well-known figure in the third and second centuries BC was the poet who travelled from city to city giving public recitations. But a different way of enjoying poetry became common during this period: reading it on the page. The centre of Greek culture had shifted to Alexandria, on the Egyptian coast, where scholars collected and copied papyrus rolls, and poets could consult the vast array of their predecessors’ writings.

When Rome became the dominant power in Europe, its poets—many of them strongly influenced by Alexandrian poetry—also wrote with the page in mind. There is scant evidence of public performance of Latin verse, other than private dinner parties or larger gatherings of invited guests listening to a poet’s new work. Virgil’s poems were adapted for the theatre, and there were poetry competitions at Roman events modelled on Greek festivals (Nero founded one, and—unsurprisingly—was awarded prizes for performing), but poems were much more likely to be a matter for private consumption.

Poetry dwindled in importance with the decline of the Roman Empire, and it was only in the fourth century AD that it began to flourish once more. Poets became important propagandists for political figures, and panegyrics were performed at great public events like the installation of consuls. This poetry was in Greek or Latin, but alongside these elite, written languages the spoken languages of the peoples of the north—what we now call Old High German, Old Norse, Old English, and so on—began to be used for poetic compositions. Once again in the history of Western poetry, oral traditions kept poems alive, probably for centuries, until they were written down and became fixed. We can only guess at the venues and events at which poems were performed. One of the few poems that have survived from this period is the Old English Beowulf, written down in the seventh or eighth century but telling of events that occurred some two or three hundred years earlier, in which poetic performances take place in the great hall before the king. Poet-performers played an important political role in early Irish and Welsh culture, too, at least as early as the sixth century.

The later medieval period saw an extraordinary flourishing of vernacular poetry in Europe, with performances taking place at court, in the streets and marketplaces, and in the houses of the nobility and gentry. Popular performance was often frowned on by the Church, which continued to use Latin, although the activity of monks in copying old manuscripts was of inestimable importance in transmitting the poetry of the past. But from the fifteenth century onward, the public performance of poetry waned, under the influence of three things: increasing literacy, enabling more and more people to read rather than listen to poetry; the growth of the theatre, which provided a different kind of public performance for verse; and the invention of the printing press, which made poetry on the page more widely available.

This situation prevailed for many centuries, until further technological advances allowed large audiences to enjoy the performance of poetry once more: radio, television, and the internet. The American Poetry Foundation, for instance, numbers the listeners and viewers of the poetry it sponsors in the millions. And it is thanks to these technologies that events like the Glastonbury Festival have allowed people to rediscover the power and pleasure of the live performances of poetry that held the audience in Ancient Greece spellbound so many centuries ago.

Derek Attridge is the emeritus professor of English and related literature at the University of York . He is the author or co-author of 15 books on poetic form, literary theory, and South African and Irish literature, and has edited or co-edited eleven collections on similar topics. He has held fellowships or visiting professorships in the United States, South Africa, France, Italy, Egypt, and Australia and he is a fellow of the British Academy. He is the author of The Experience of Poetry: From Homer's Listeners to Shakespeare's Readers.