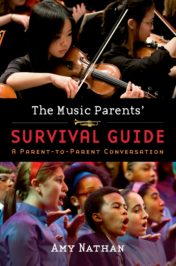 Keeping Upbeat in Tough Times is the new motto for the San Francisco Community Music Center. The phrase sums up the school’s attitude toward the abrupt transition to online instruction that it had to make this spring, after local schools closed their doors because of a government-ordered mandate aimed at slowing the spread of the COVID-19 pandemic. Teachers at music schools have done their best to adjust to virtual teaching. “I’m trying to think about it as positively as possible,” said Peabody Preparatory violin and viola teacher Jaclyn Dorr. “We miss seeing our students and their families in person. But given the current circumstances, it’s amazing that technology allows us to connect with our students at all.”

Dorr has come to realize that connecting online with her young students is “the most important aspect of what we are doing. Teaching them violin is only one piece of the puzzle now. It’s also about being there and creating a sense of normalcy during these uncertain times, sending students positive energy and letting music be an artistic escape from being in the house all day.” Moreover, research has shown that both making music and listening to it can provide a feeling of well-being, a much needed reason to keep youngsters involved with music during this crisis.

Dorr and some other teachers at Peabody Prep, in Baltimore, changed overnight to online lessons for their students, after it became clear that Maryland schools were closing. San Francisco Community Music Center took just two days to regroup, as did New York’s Third Street Music School. In Seattle, the Music Center of the Northwest had been closed last winter for several weeks because of a blizzard and decided then to look into online options in case “there should be another snow-mageddon,” explained Chas Arnold, the school’s executive director. “So we had a plan in place.” He had also stockpiled a few computer tablets in case of a future emergency and was able to hand them out to faculty and others who didn’t have one.

Music schools have generally let teachers and students use whichever video-conferencing options work best for them, although holding group classes has been challenging. Ensemble performing in real time is impossible with today’s technology. The lag time in the transmission of sound between online devices means there is no way musicians on either end of a connection can play or sing in sync. Music schools were determined to find a work-around because group and ensemble classes are part of what keeps young people involved with music. Group classes are a mainstay of early childhood music education. For middle schoolers, the social aspects of joining an ensemble can keep them making music when other interests may lure them away.

“We are stressing the importance of the social element in online group classes,” said Brandon Tesh, director of Third Street Music School. “We’re encouraging teachers to stick to their usual class time. At the start of class, just have everybody there via video for a few minutes to do a check-in, so students can say hello to their classmates, ask what they’ve been doing.” Video-conferencing apps post photos on the screen of everyone on the call.

Advance planning smoothed the way for Third Street’s group classes. The school set up its piano accompanists with good recording equipment at home so they could make recordings of pieces a class or ensemble would play. Those recordings could be sent both to students for practicing at home, and to teachers for use during a group class or private lesson. If there’s no accompanist to make a recording, teachers could find recordings online. One group-class strategy used by several schools creates “mini individual lessons during the group class,” said Tesh. A teacher works with Student A on a phrase, while muting other students’ mics. The other students practice the phrase on their own, until it’s each one’s turn to have their mics go “live” to perform for the teacher.

For group classes with young students, “you have to mix things up, just as you do with live group lessons,” said Rebecca Henry, co-chair of the string department at Peabody Preparatory. “We play ‘copy cat.’ I mute them all and play something. Then they play it. I can’t hear them but I can see them all, and can see if their bows are going in the right direction and they’re using the right fingers.” She plays flash card games with them and music bingo, using bingo charts that she sent to parents to print. Using the screen-share option, she showed students the score of a fun new piece. “We clapped the rhythm together and said the note names. I played it, and then they played it.”

For her teen students, “we are not canceling anything,” said Henry. “We are doing exams, recitals, and studio classes.” For her advanced teen group class, she is setting challenges for them—such as to learn to play one of Paganini’s “24 Caprices” in three weeks. She also asked what projects they’d like to work on if virtual lessons have to continue. Some asked to learn how to do the video editing needed to turn videos of each of them playing a group piece at home into a virtual concert.

The poor sound quality in online gatherings frustrates Henry, as do the limits on what she can teach. “But it makes you be creative in other ways,” she noted. She has started doing a-synchronous lessons for a student who didn’t do well with online lessons. This student records a piece at home, emails it to Henry, who emails back comments, leading to a fresh round of emails and video chats.

“It’s more exhausting to teach online, especially for group classes, which require a lot of extra planning,” said Peabody Prep’s Jaclyn Dorr. San Francisco Community Music Center piano teacher Jonathan Kornfeld added that “projecting into a computer for hours is mentally fatiguing in ways I wouldn’t have expected. Without being in the room with my students, it takes much more mental energy to communicate and compensate for all the lost nuances that are part of normal interaction.”

Both teachers will be glad to return to in-person instruction. But Dorr noted a benefit of online lessons. “I’ve been getting to know my students on a deeper level, to find out what would inspire them during this time period—learning a new piece, writing their own pieces, practicing scales under a tree in the backyard, or trying to incorporate in a lesson music by a rap artist that a teenager is inspired by.”

Her colleague Rebecca Henry sees a more practical benefit. “Make-up lessons for snow days are history,” she announced. “On snow days, I’ll give online lessons, instead of waiting to the end of the semester for make-up lessons. It will also be easier now to say to parents, ‘If your child is sick, I’ll do the lesson online.’ This crisis is making us think more about the illness factor, especially since we are so tactile in molding young bow holds.”

“I would not be surprised if next year there is some element of flexibility in allowing remote instruction, not full-time, but for special classes or for illness,” said Third Street Music School’s Brandon Tesh. “But we are a community music school. The face-to-face connection with the teacher and other students is really important. We’ll always be emphasizing that.”

Amy Nathan is an award winning author of several books on music including The Music Parents’ Survival Guide: A Parent-to-Parent Conversation, and two earlier books for young people, The Young Musician’s Survival Guide: Tips From Teens and Pros and Meet the Musicians: From Prodigy (or Not) to Pro. Her newest book—Making Time for Making Music—is for and about amateur musicians. She is the mother of two musical sons: one a composer and the other a saxophone-playing political scientist.

How after school music programs have adapted to online music playing