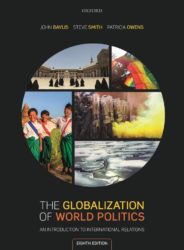 The Globalization of World Politics

The virus lurks on car door handles, on doorknobs and the floor, on the breath of others or in a friend’s hug, on onions in the supermarket, and on the hands of the valet who parks your car. If you venture outside, everything and everyone is a threat. So, it is better to stay home, safely locked away with your previously disinfected computer which connects you to a world that is innocuous because it’s virtual and therefore harmless. What makes you sick lurks outside your door. The fear of what we know to be real, but which only materializes in suspicion, is enough to keep us locked away. This individual sensation of anguish in the face of a threat leads to voluntary confinement and that is the success of social control. Fear is used as a disciplinary device.

The strategies used to make bodies docile for the purpose of social control is what the philosopher and historian Michel Foucault called discipline. In the context of COVID-19, there are those who do not initially choose self-discipline since there is an even higher level of discipline: mass deaths in foreign climes. But those who have yet to discipline themselves will do so once these deaths increase or occur closer to home. China and Korea didn’t wait for the second stage and went directly to surveillance through apps. In the end we have the shocking images of deserted New York and Venice which show that discipline has been successful: Nobody goes out anymore. We initially resist discipline – as Foucault pointed out in the case of schools and the army – but in the end we confine ourselves to the home as an institution of isolation for biopolitical purposes.

Returning to Foucault, self-enclosure is a technology for disciplining bodies for the governmentality of mobility, permitting the same rhythm of consumption and growth for the productive and market sectors that sustain current neoliberalism (mining extractivism for the digital industry and bio-work for the production of big data) without continued damage to the planet, which is now a source of natural resources rather than life itself.

We face the disciplining of bodies as part of a global biopolitics to change the working model and limit the mobility of the elite. The mobility of the most precarious, economic and forced migrants, has already been managed for some time, leading them to death in what I have called the necropolitical apparatus of production and administration of forced migration. This refers to the set of policies of death that force people to leave their countries for the benefit of extractive capitalism, eventually dying on the way or being disposed of in spaces characterized by legal limbo.

We know from Foucault that in governmentality there is no necessary intention in the cause, or at least there is no direct intention, it is always the management of behaviors: inhibiting, procuring, annulling, reversing, manipulating, controlling or assuring the actions of the other leading to self-care, self-regulation, or, in this case, self-imposed immobility. The important thing about behavior management is productivity, the benefits it brings and who benefits from them. At this point in quarantine we are already beginning to see that not only virtual tours to famous museums or online courses for yoga or quantum physics are offered, but platforms that facilitate meetings for offices, businesses, politicians, high school and college students.

While only a few months ago few people knew about platforms like Zoom, Jitsi Meet, Meet, and Google Hangouts, today everyone uses them. In the future there will be others that will come to replace them, but these platforms establish the production model for which we are being disciplined. We are facing a change in the importance of the transition from Fordism to Toyotaism. The goal of this change is to immobilize us sufficiently to control human mobility without bringing production and consumption to a halt. A microeconomy of self-enclosure is already in place: Zoomism.

Fordism was the model of mass industrial production that replaced Taylorism and guaranteed full employment and universal or employment-linked social security, as occurred in Mexico among other countries. Toyotaism, which replaced Fordism, established piece-rate, hourly work without compulsory social security. Zoomism would be the mode of production for self-enclosure, which also increases added value since the operating costs of corporate offices are transferred to workers: electricity, the internet, water and even coffee. Without the need for time to travel to work or even to venture outside, we become more productive. The current quarantine disciplines us to immobility, to seclude our bodies and project our professional avatars through digital platforms, reformulating the perception of time and space of globalization. David Harvey conceptualized this as the compression of space and time through information technology, as well as through low-cost flights that increased and changed tourism, business and work. We will progress from a relative perception of global space-time as something compressed, to a perception and experience of space-time in absolute terms: a materially immobile present and space that moves only virtually.

Zoomism, of course, has a major class component, just as the spread of COVID-19 did initially – being spread throughout the world by tourists and elite travelers. This virus was propagated by first-world travelers and middle class foreigners from  around the world, not by poor forced migrants. For the latter, the necropolitical device of production and administration of forced migration is still in place. For them, it is business as usual. Change comes with the disciplining of the middle classes to introduce Zoomism, which has various social control objectives, of which the following are just a sample:

We are facing an epochal shift. Social control in the face of the pandemic provides diverse opportunities to be faced from self-enclosure, and quite possibly via communication platforms like Zoom.

Ariadna Estévez is a professor at the Centre for Research on North America, the National Autonomous University of Mexico. She teaches courses on human rights and forced migration and biopolitical and necropolitical research as the UNAM faculty of political and social sciences. Estévez has a PhD in human rights (Sussex University), a master's in political sociology (City University), and a degree in journalism and collective communication (Universidad Nacional Autonoma de Mexico).