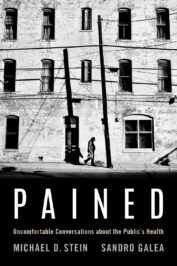 Near the end of 2018, data released by the Centers for Disease Control and Prevention showed that a small, but growing, number of children in the United States were not getting recommended vaccinations. One in 77 infants born in 2017 did not receive any vaccination. That’s more than four times as many unvaccinated children as the country had at the turn of the century. Some of this may be due to lack of access to vaccines; populations without insurance and those living in rural areas have greater rates of nonvaccination. But part of it is also likely due to the rise of conspiracy theories and the willful dismissal of scientific evidence when it comes to vaccines.

Vaccinations have always provoked anxiety. But the data on vaccines that are in widespread use are now clear:  vaccines are safe and save lives. Nonetheless, conspiracism insists that we don’t know all the facts, that things about vaccines are not as they seem. Conspiracism fuels the anti-vaccine movement, nudging people to accept anecdotes (e.g., “I heard about one child who got a measles vaccine and developed autism”) over statistics.

And, with the unpredictability of political leaders’ words and actions, we are one menacing sentence away from real public health trouble. Imagine if a president one day were to announce, “People are saying that maybe we don’t really need quite so many vaccines for our kids. After all, look at all this autism that’s around.” This vague conspiratorial phrasing—people are saying—this kind of innuendo, would immediately corrode confidence in our collective public health policy. Conspiracism undermines authority.

Conspiracists question the safety of vaccines not just because of distrust of the pharmaceutical industry, but because they tend to question the function of government itself. For them, vaccination policy raises questions about the scope and intentions of federal power. The growing avoidance of vaccination seems to reflect interlocking anxieties about media, science, and government. Yet no matter how passionately the conspiracists make their case, it remains true that universal vaccination is in our common interest. Unlike conspiracists, public health adheres to standards of evidence and falsifiability. When conspiracists disregard explanation and refuse any form of correction, they place health at risk.