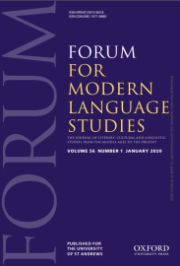 Forum for Modern Language Studies publishes articles on all aspects of literature, language and culture, from the Middle Ages to the present day. The journal aims to reflect the essential pluralism of research in modern languages and to provide a forum for worldwide scholarly discussion. It invites articles addressing the following languages: Arabic, English, French, German, Italian, Portuguese, Russian and Spanish. Submissions in comparative literature and theoretical linguistics are also welcomed, as are those dealing with visual art, film and the performing arts. Each annual volume comprises four issues, two of which are normally special issues addressing topical themes and debates across the journal’s portfolio of languages, literatures and cultures.

Last year my seven-year-old daughter came home from school and “flossed” in the middle of our lounge room. For the uninitiated (as I was) and for the oldies (as I am), flossing is not your average teeth-cleaning ritual, but “a dance in which you move your hips from side to side while simultaneously moving your hands through the air in the opposite directions as if holding on to the hips of a woman.”

If you can’t quite visualise how the everyday routine of dental flossing becomes a dance, 15-year-old Savannah’s YouTube tutorial caters to those of us less in the know. “Yes it’s that dance your kids always do, but you can’t seem to master,” pokes – and jerks – Savannah. And Savannah is right. The awkward, jolty moves demand something that is beyond my body’s capacities for arrhythmic coordination. Watching my daughter floss jerkily from side to side, I wondered: who is this flossing child before me?

In the midst of COVID-19, there has never been a more compelling moment to think about how expressions of childhood move through culture. There has never been a more urgent time to reflect upon what it means to be – what I have called before this pandemic – a viral child. In 1994 media theorist Douglas Rushkoff coined the metaphor ‘viral’ media to describe the rapid spread of digital content across media platforms. In the compromised context of COVID-19, the concept of viral media is exceptionally acute as we repurpose and stretch existing media frameworks to fit the circumstances of a virus pandemic and a globe in isolation.

Young people are already the drivers of viral content, although now the circuits between the live and the digital are being domestically contained. When dance moves such as the floss would normally move between dance clubs and TikTok, street spaces and YouTube, or playgrounds and Twitter, the limiting circumstances of home isolation, rather than restricting innovation, only seem to increase it. Comical, goofy, parodic responses show us that movements are still on the move in infinitely shareable, infinitely commercial, possibly radical – and yes – culturally unprecedented ways, from classroom antics to TikTok mashups.

Last year’s precedents in youth activism have had a large role to play. Youthquakes took place around the globe; students stormed the streets and young speakers showed mastery in rhetorical from. In a global first, the Time Person of the Year was none other than Greta Thunberg, a child. And in Australia, our TVs were startled by the footage of youth activist #Eggboi upstaging a press conference to egg an Australian senator in the head for racism. These movements point to the eco-political as well as digital contexts in which contemporary childhoods take place. They occur despite prevailing perceptions that children should be kept out of politics.

In the context of COVID19, the digital life of a viral child produces a set of performance frameworks that position children’s voices and gestures centre-frame. These are scenes that position the child as a self-constituting, self-generating part of the total image-sphere. They depict children as agents of their own representations. It seems that children are commanding the screen, the scene, the message.

Where the haphazard eruption of a lounge room floss might seem small and insignificant – what might be interpreted as nothing more than a minor representation – it also reflects major structural, social and economic shifts. It arrived in my house as an embodied expression of the multiple sharing economies with which young people’s identifications are built. But it also shows us that the changing nature of childhood transforms the function and reach of media platforms, and that both are building new types of audiences and markets.

We can think about these expressions as new forms of literacy that change who controls how communication takes place. They are radical because they stage within the body a knowledge of movement’s power, of its rhetorical and political potency to move. They teach the body what it feels like to act together – even at a distance – and how that form of collective action can lead to tangible change.

Children, as the symbols as well as generators of these evolving forms of communication, are instrumentally shifting how their agency – cultural, political, and economic – is being put to work. Being a viral child suggests that both youthquakes and pandemics are equally possible, often interconnected, circumstances. Being a viral child means that is not possible to operate from outside of these domains and the thorny ambiguities that they stage. It is rather a way of navigating and transforming the paradigms within which the voices, moves and self-expressions of young people are made to appear – and hopefully, to count.

Dr Bryoni Trezise is a senior lecturer in theatre and performance studies at UNSW Sydney. Her research focuses on performance aesthetics and cultures. She has published two books Performing Feeling in Cultures of Memory (Palgrave, 2014) and Visions and Revisions: Performance, Memory, Trauma with Caroline Wake (Museum Tusculanum Press, 2013). Her latest project, Minor Representations: Performing in the Field of Childhood examines how young people express changing ideas about childhood. Her prize-winning essay in FMLS is part of that exploration. 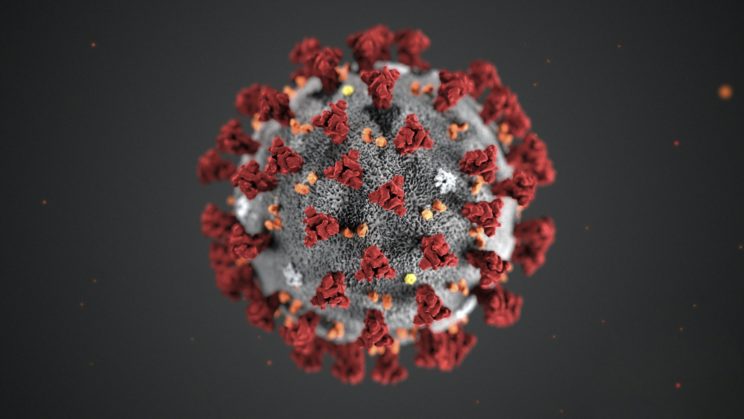 It’s time for the government to introduce food rationing

Confronting mortality in the COVID-19 pandemic