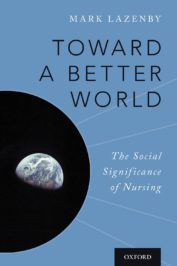 Toward a Better World: The Social Significance of Nursing

In the last four months, the severe acute respiratory syndrome coronavirus 2 (SARS-CoV-2) has marched across the globe. It has stomped to every continent and, as of my writing, to 134 of the 195 countries in the world, sickening hundreds of thousands of people – and killing thousands of them – on its way to global dominance.

Recently the New York Times ran a story about a doctor and a nurse, both women in their mid-twenties, each with a loving partner and a young child, who, in the hospitals of Wuhan, had cared for people with COVID-19. I know the terror they must have felt when they donned their personal protective equipment and walked into infected patients’ rooms. I know the terror they must have felt when they took that equipment off. Maybe they had mistakenly touched the outside of one of their gloves and then, unknowingly, rubbed the virus into their eyes. Maybe they had left a microscopic gap in their face masks and inhaled the virus. Whatever had gone wrong, both became infected. Both became terribly sick. One of them needed mechanical ventilation for her lungs to work. She died a horrible death. Inexplicably, the other survived.

What if I had come into close enough contact with someone who had COVID-19? What if I had picked up the virus from an infected person?

When I went to a store recently – we needed a few staples – I thought that people would obey the precautions the infectious disease experts have been exhorting everyone to take: stay at least six feet away from other people, and if you exhibit symptoms of COVID-19, including a cough, do not go to places where other people are. When I went to the store, furrowed brows signed our communal angst, suggesting that we all wanted to get what we needed while protecting others.

Yet a woman stood over the Gala apples and coughed several times. It was a dry hack, the kind that suggests a viral respiratory infection that indicated COVID-19. On the dry goods aisle, two people, obviously close acquaintances, stood face-to-face catching up with each other. They just chatted, laughed, and carried on. I could not get past them without coming into their six-feet orbit. Even though they did not appear sick, they still could have been asymptomatic carriers of the virus. I asked them if they could make way for me to get by so that I could access what I needed, which was just on the other side of them. “Go around to the next aisle,” one of them said to me. I made a circuitous route. In our eagerness to get what we all needed, few seemed compelled to obey the six-feet rule.

I came home, took off my clothes, washed them, and scrubbed my hands. Maybe I did not need to wash my clothes. But what if the virus had landed on them and then, after I touched, I picked up the virus on my hands and, without thinking, rubbed my eyes? I would infect myself, and then, I could die a horrible death just as that young healthcare worker in Wuhan did. Or worse, I could infect my wife and son, and they would die that horrible death.

Of course we all will die!

Yes, but please not from COVID-19, not a communicable disease that, with the right public health precautions, we all could have been prevented from acquiring.

This pandemic has brought the world to its knees. Financial markets have nosedived. The global economy is in recession, and an economist from one of the world’s leading banks thinks it could be deep, in large part, due to the pandemic. Whole countries are on lockdown, with their citizens instructed to shelter in their homes until further notice.

Why has the COVID-19 pandemic gripped us – at least us in the countries of the Northern Hemisphere – with such existential fear?

Maybe we are gripped with fear because, by and large, the world’s governments are inept. They have bungled what should have been a straightforward public health response. Hong Kong, Singapore, and Taiwan have contained the disease. An epidemiologist and his graduate student have written about the public health response these countries, two of which are city-states and the other a fairly small island, have successfully taken. Perhaps countries the width of a continent like mine could very easily have taken similar effective responses – or maybe not. But we will never know, because they did not try.

Maybe fear grips us because we have become accustomed to science and technology curing diseases and solving emergent problems. For instance, we continue to place our faith in science and technology to cure the disease that plagues the earth – the disease that we are the vectors of, the disease of global climate change. We do not look at our behaviors, our modern lifestyles, as the virus that is killing Earth, even though they are. Instead, we continue to live as we have and say that, soon, very soon, the scientists and the engineers will find a way to take out all the greenhouse gases we pump into Earth’s atmosphere, the very gases that are causing Earth to warm up and die. Soon science and technology, we say, will solve global climate change, the disease caused by us. Yet we are the virus.

Maybe fear grips us because we know that science and technology cannot move fast enough to extinguish this virus. Maybe the vaccine the scientists will develop and the novel delivery method the biomedical engineers will discover will come too late. Maybe millions and millions of people will have died by then, our grandmothers and grandfathers, our parents, our siblings, our children. We do feel helpless, in part because we see the limits of science and technology. Helplessness is a terrifying monster.

But I think our deepest fear in the pandemic is this:

We are now confronted with a fundamental truth that many of us in the countries of the Northern Hemisphere have hidden from ourselves. It is truth that perhaps those who daily face the threat of malaria know, a truth that those who have endured Ebola outbreaks have known, or that those who lived before polio was vanquished knew. It is a truth that nurses and physicians know whenever they place themselves in harm’s way. It is a truth that the coughing woman picking out apples was confronted with, a truth people blocking my way down the grocery-story aisle could not confront. Life is ephemeral. We will die.

I do not want my death to be today or tomorrow or in the next 14 days from COVID-19, but I know I will die. I have seen death, and as a nurse, I have seen my death in the death of others. In seeing my death, I have been confronted with the truth that life is short.

In the face of possible but preventable death from this virus, we confront the need for our lives, in the ephemerality of human life, to have inestimable value. In this pandemic, we confront the meaning of life itself.

Mark Lazenby is a professor of nursing and affiliate professor of philosophy at the University of Connecticut, where he is also the School of Nursing's associate dean for faculty and student affairs. He has written books on the 20th-century philosopher Ludwig Wittgenstein's views of religion and on the ethical significance of nursing.