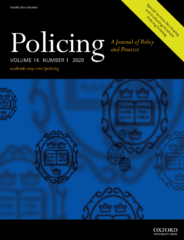 Policing: a Journal of Policy and Practice is a leading policy and practice publication aimed at connecting law enforcement leaders, police researchers, analysts and policy makers.

As the COVID-19 pandemic spreads we have to take unprecedented steps to deal with it, people are being denied rights and resources they have long regarded as inalienable. And the police are in the unenviable position of having to enforce these restrictions. What happens when people feel they have to go out to work but a police officer tells them to go home? What will happen if the National Health Service is overwhelmed ends up telling patients they cannot have a hospital bed or a respirator? Will patients’ anger and frustration boil over? Will there be riots on our streets? And what can the government and police do to deal with these challenges?

As part of our role as part of the group of behavioural scientists feeding advice into the government response to the pandemic, we believe there are three key things to keep in mind.

First the good news is that social disorder is not inevitable! A large body of evidence shows that people don’t riot as a knee-jerk reaction when they are frustrated, or they don’t get what they want. Even when people are starving, that doesn’t necessarily generate food riots. Rather, people need to feel that the way the situation is being handled is unjust and that they share a collective grievance with others in the same boat as themselves (their ingroup). Second, they need to identify a clear source (or outgroup) who is responsible for their plight and who they can target.

Whether a sense of grievance emerges or not depends critically upon the government policy framework. On the one hand, the government needs to bring people together with a clear sense of community. Without such a platform, there is a much greater danger that people will avoid acts of citizenship and instead embrace a harmful and conflict-inducing perspective of “everyone for himself.”

On the other hand, government must formulate its policies clearly for the overall good of the community to prioritise those who are most vulnerable in the community. If this is the case, people are more likely to accept such policies, even if they lose out personally. However, if people see the policies as inequitable and to unfairly advantage certain groups over others, then there’s more prospect for conflict. If, for instance, the government formulates its criteria for essential workers poorly then enforcing confinement could be a recipe for disaster.

Within the framework of government policy, it’s important that people see the police as acting for the whole community in their enforcement measures. While this is closely linked to perceived equity of those measures, there are still important things the police themselves can do to avoid being seen as an alien force imposed on the community.

Second, and at an operational level, the police need to prioritise talking to and negotiating with local communities and giving priority to facilitating their needs. This is crucial to reducing conflict. Essentially this is a matter of understanding community priorities, starting from the premise of how best to support these, and clearly communicating (where possible using community representatives themselves) why policing measures are necessary in order to further the communal interest.

As previous research has shown, when the police do this people are more likely to accept police actions and also actively self-police in order to stop other people from acting in harmful ways.

Riots are not inevitable even in the hard times like those we face at present. Whether or not conflict develops is to a large extent dependent upon whether or not communities see the government measures and policing initiatives as developed with them and working for them, or else as illegitimate impositions upon them.