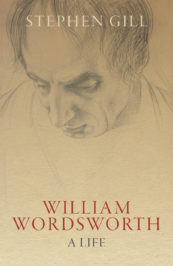 “A divine morning–At Breakfast William wrote part of an ode—Mr Olliff sent the Dung & William went to work in the garden.”  This entry in Dorothy Wordsworth’s journal for 1802 is characteristically straightforward, but for the biographer how to deal with it is anything but.

After years of unsettled wandering William and Dorothy Wordsworth had returned to the Lake District where they were born and were now at the beginning of the second year of their life together on the edge of Grasmere village.  It was to be an experiment in holistic living.  Brother and sister had little money, but they were determined to create a home together, to decorate and furnish their rented cottage, to become as self-sufficient as possible domestically and as productive as conditions in the garden would allow. Wordsworth had come to believe that he had a calling to be a poet, but the production of poetry had to be part of living the good life.  Composing verse was to be in continuum with digging and planting in the garden. Saturday 27 March began with drafting lines over breakfast and then when the dung promised by their neighbour Mr Olliff arrived, William set to, spreading and digging it in.

As he bent over the spade, was he going over the “part of an ode” he had written at the breakfast table?  It seems likely. And what an ode it is. In lines eventually entitled Ode. Intimations of Immortality from Recollections of Early Childhood, the attempt is made to assuage the pain of loss through acknowledgement of the compensations life offers as we grow older.  Another great poet, Gerard Manley Hopkins, wagered that “St. George and St. Thomas of Canterbury wore roses in heaven for England’s sake on the day when that ode was penned.”  Perhaps they did, for the Intimations ode is certainly a marvelous achievement.

Evidence about the dung and evidence about the genesis of one of Wordsworth’s finest poems are very different, however, different not only in kind but in importance. The first is a matter of selection from the documentary material that survives to bring to life the historical figure, William Wordsworth.  This figure, moreover, might be fleshed out in a narrative that avoided almost all mention of poetry and it could engage any reader with historical interests, for Wordsworth lived in tumultuous times and he was intelligently responsive to them.

The challenge for the biographer would be what to emphasise from the mass of available evidence. Should it be Wordsworth as lover, husband, father? Wordsworth’s political journey perhaps?  His passion was “wandering,” Wordsworth declared, but he also thought he would have made a good general. So how much weight in the narrative should be given to his amazing feats of walking and how much to his correspondence with a leading military strategist? Wordsworth was a keen angler, who admitted to envying Sir Humphry Davy’s fine rods. At least half a chapter could be devoted to their shared passion.  For all of these topics lots of evidence exists.  What it calls for is selection, interpretation, emphasis. How important is the dung? Readers will have their own views, but there can be no dispute as to the fact that on 27th March 1802 William Wordsworth dug it in.

The other kind of evidence is quite different.  It concerns Wordsworth the writer, someone who believed he was called to devote his life to the art of poetry, one who were he alive today would be able to rejoice in a reputation that proves he was not misled in this belief.  But how can the biographer deal with this figure, the creative artist?  A considerable amount of manuscript and bibliographical material survives to document the material history of Wordsworth’s poems, from first drafts to final publication, and it has been mined by scholars in densely detailed accounts of the poet’s working practices.  But whereas the textual scholar is concerned only with the words on the page, the biographer must be concerned with the relation between those words and the lived experience of the creating but also dung-digging poet.  And what that relation is always presents itself ultimately as a mystery inviting speculation.  At breakfast William wrote part of an ode.  Why then?  The poem opens with an unequivocal acknowledgement of huge loss.  The celestial light that once appareled meadow, grove and stream, is gone.  Where is it now?  But this same poet only months before, in Home at Grasmere, had declared himself blessed beyond all expectation and was soon to be writing many of his loveliest lyric poems, jubilant in the joy of life. What are we to make of this moment?  Deciding what to do with this kind of material is much more difficult than deciding what to do with the dung.  And altogether more important.

Stephen Gill is professor emeritus at Oxford University, a supernumerary fellow at Lincoln College, Oxford, and a long-serving member of the Wordsworth Trust.