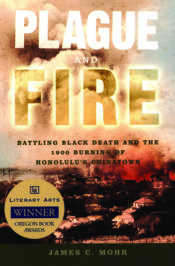 Plague and Fire: Battling Black Death and the 1900 Burning of Honolulu's Chinatown

Public health officials all over the United States—indeed globally—are trying to decide how to deal with the world’s coronavirus pandemic.   They know the coronavirus originated in China, and they know they can identify it with certainty.  But they do not know what might kill it, and they have no cure for anyone who contracts it.  Importantly, they are under intense economic and political pressure to suppress the pandemic, despite the diversity, suspicions, and limited trust of the populations affected.

Few people realize, however, that this is not the first time US health officials have faced a pandemic crisis under almost exactly the same circumstances.  In 1899, the world’s third great wave of bubonic plague reached Honolulu.  Neither of the world’s first two waves of Black Death had made landfall in the islands, so the situation was both novel and terrifying.  Like officials today, health officers in Hawaii knew the disease had come from China, and they could identify it with certainty under microscopes.  But they did not know how to kill it, they did not know either how or how rapidly it spread, and they did not know how to cure it.   And they too were under intense economic and political pressure; all trade with the islands was suspended under international protocols, and their own local government had panicked.

The city’s health officials began by implementing quarantines around the district where the first victims died, but like today those quarantines failed to contain the disease.  Since the early victims were Chinese, ugly cries arose for the destruction of all Asian neighborhoods on the pretext that they seemed to be breeding grounds for plague; blaming victims and increased hostility toward minorities had been hallmarks of health-related panics since ancient times.  Honolulu’s health officials bravely rejected those demands, but with the economy at a standstill and pressure mounting from Washington, they dared not do nothing.

With no proven options available, they decided—on the first day of the twentieth century—to try burning any building where a victim had died.  They hoped that would eliminate the plague’s strongholds.  On January 20, 1900, an unexpected shift in the prevailing wind transformed one of those targeted burns into an uncontrollable firestorm, which completely destroyed one-fifth of Honolulu in a matter of hours.  The thousands of people who had lived in the incinerated district—almost all of whom were Chinese, Japanese, or Hawaiian—not only lost everything, but found themselves forced into ad hoc quarantine camps under armed guard for weeks.  Mismanaged compensation schemes worsened their suffering for years to come.  By succumbing to the pressure for action, those health officials had inadvertently precipitated what remains the worst civic catastrophe in Hawaiian history and one of the worst disasters ever initiated in the name of public health by American medical officials anywhere.

While catastrophes on the scale of the great Honolulu fire are unlikely to recur, the Hawaiian experience suggests that contemporary policymakers need to weigh their options carefully. They face remarkably similar circumstances and they too will continue to be under intense economic and political pressure to act.  Officials need to be reasonably certain that their actions will do more good than harm, in the short term as well as the long term.  They need to consider in advance what could go wrong as the result of any given policy—however safe and well-intended it seems—and take steps to guard against those possibilities.  And they need to pay special attention to those who are least influential and most vulnerable; they were the ones who suffered disproportionately a hundred and twenty years ago, and they are likely to be the ones disproportionately affected today.

James C. Mohr is College of Arts and Sciences Distinguished Professor of History and Philip H. Knight Professor of Social Science Emeritus at the University of Oregon.  A specialist in social history of medicine and public health, he is the author of numerous books, including Plague and Fire: Battling Black Death and the 1900 Burning of Honolulu's Chinatown (OUP, 2004).

The story of COVID-19, by the numbers