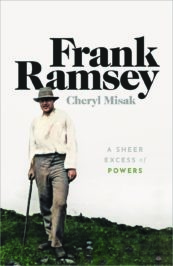 Frank Ramsey, the great Cambridge philosopher, economist, and mathematician, was a superstar in all three disciplines, despite dying at the age of 26 in 1930. One way to glimpse the sheer genius of this extraordinary young man is by looking at some of the things that bear his name. My favourite was coined by Donald Davidson: the Ramsey Effect is the phenomenon of discovering that your exciting and apparently original philosophical discovery has been already presented, and presented more elegantly, by Frank Ramsey.

Ramsey published a grand total of eight pages in pure mathematics. He had been working the Entscheidungsproblem in the foundations of mathematics, which asked whether there is a way of deciding whether or not any particular sentence in a formal system is valid or true. He solved a special case of the problem, pushed its general expression to the limit, and saw that limit clearly. A theorem he proved along the way showed that in apparently disordered systems, there must be some order. The branch of mathematics that studies the conditions under which order must occur is now named Ramsey Theory, with more discrete parts of it called Ramsey’s Theorem and Ramsey Numbers.

In 1927-28, Ramsey published two papers in economics, with the encouragement of John Maynard Keynes. When the Economic Journal celebrated its 125th anniversary with a special edition in 2015, both papers were included. That is, looking back over a century and a quarter, one of the world’s best journals of economics decided that two of its 13 most important papers were written by Frank Ramsey when he was 25 years old. The editors explained themselves by saying that the papers initiated “entirely new fields”—optimal savings and optimal taxation theory. In addition, they produced the Ramsey-Cass-Koopmans model, Ramsey Pricing, Ramsey’s Problem, the Keynes-Ramsey Rule, and more.

Ramsey was also the first to set out the subjective conception of probability and expected utility theory that underpins much of contemporary economics. That is, he figured out how to measure degrees of belief and preferences and then showed how we might determine what a rational decision would be, given what someone believes and desires. He was a socialist and wouldn’t have been happy with what became of his idea—he didn’t think that all human action and decision should be crammed into the strictures of rational choice theory, as many economists and social scientists today seem to assume. Nonetheless, in this domain we find the Ramsey/de Finetti Theorem, the Ramsey-Good Result, Ramsey’s Procedure for measuring the intensity of preferences, and more.

In philosophy, he was just as impressive. When an undergraduate, he translated Ludwig Wittgenstein’s Tractatus and wrote a critical notice of it that still stands as one of its most important commentaries. He went on to have a profound influence on Wittgenstein, persuading him to drop the quest for certainty and purity, and turn to ordinary language and human practices. Ramsey was in search of a realistic philosophy and was leaning in the direction of American pragmatism when he died.

He also made major contributions to analytic philosophy. For instance, in a footnote in a draft paper published after his death, he suggested that when someone evaluates a conditional “if p, then q” they are hypothetically adding the antecedent p to their stock of knowledge and then seeing if q would also be there. Robert Stalnaker in 1968 proposed a theory of truth conditions for counterfactuals on the basis of that footnote. What is now known as the Ramsey Test for Conditionals is a method for determining whether we should believe a conditional.

In another draft paper, Ramsey devised a novel and important account of scientific theories and their unobservable entities. A theory is a long and complex sentence, starting with: “There are electrons, which . . .” and going on to tell a story about those electrons. We assume there are electrons for the sake of the theory, just as we assume there is a girl when we listen to a story that starts “Once upon a time there was a girl, who . . . .”  Unlike the story, we commit ourselves to the existence of the entities in our theory, knowing that if it gets overthrown, so will our commitment to its entities. In the meantime, we use and believe the theory. Any additions to it are made within the scope of the quantifier that says that there exists at least one electron—the theory can evolve while still being about the original entities. Such a sentence is now called a Ramsey Sentence and is employed by both philosophers of science and philosophers of mind.

But Ramsey was the antithesis of the kind of figure usually associated with great genius. He was not an enigmatic, cult-encouraging eccentric, like his friend Wittgenstein. He was genial, open, and modest. “Never a showman,” said I.A. Richards, one of the founders of the new Cambridge school of literary criticism. Frances Marshall, at the centre of the Bloomsbury circle, never heard anyone say a word against him—she didn’t think it would be possible. But the best one-liner is from Michael Ramsey (Archbishop of Canterbury), who said that his brother had “a total lack of uppishness.”

Cheryl Misak is University Professor and Professor of Philosophy at the University of Toronto. She works on American pragmatism, the history of analytic philosophy, ethics and political philosophy, and the philosophy of medicine.