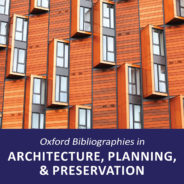 Oxford Bibliographies: Architecture, Planning, and Preservation uncovers a wealth of sources for the study of the built environment while also providing essential guidance in navigating the wide range of material, both print and online.  Not a mere list of sources, this guide distinguishes between the publications that address buildings and landscapes, which run the gamut from archaeological reports aimed specifically at professionals in the field, to more accessible studies aimed at a general readership.

Sometimes it takes a catastrophic loss for us to realize how important historic architecture and cityscapes are to our lives. For instance, repairs are still ongoing following a 2011 5.8 magnitude earthquake that caused more than $30 million dollars’ worth of damage to the National Cathedral in Washington, DC.  And on 15 April 2019 a cataclysmic fire brought massive destruction to the Gothic cathedral of Notre-Dame in Paris, including the loss of its soaring spire and its centuries-old wood roof structure. There followed an international outpouring of grief for the loss of one of the icons of Western architecture. People from innumerable walks of life and countries around the world mourned the loss of a building that represented the aspirations, creativity, and sheer labor of mostly nameless artists, architects, and workers. The restoration campaign likely will take years, perhaps even a decade or more.

Around the globe, wars and natural disasters—not to mention modernization and development—threaten the built environment. Globally, more than half of the world’s population (according to the United Nations Population Division) now lives in cities, and by 2050 about 70% of the earth’s population will be urban. We can only imagine what the implications of this growth will be for historic cities and buildings and hope that heritage preservation and conservation will keep pace.

It’s not just iconic monuments and buildings by famous architects that we have to be concerned about: historic architecture and urban environments are mostly the work of unnamed (vernacular) builders and craftspeople—not professional designers. All sorts of builders and buildings will be affected in this period of urbanization and development. To become effective preservation advocates, we will all have to become knowledgeable about a wide range of buildings and environments.

Eugène-Emmanuel Viollet-le-Duc (1814-1879), the nineteenth-century restorer of the Cathedral of Notre-Dame in Paris, made the connection between modernization and preservation in his Dictionnaire raisonné de l’architecture française du XIe au XVIe siècle (Dictionary of French Architecture from the Eleventh through the Sixteenth Centuries) published beginning in 1854. The author began his entry on “Restoration” by saying “The word and the thing are modern.” This seemingly paradoxical statement contains a kernel of truth that is as apt now as it was in the mid-nineteenth century: Although preservation (or restoration, in his terms) is concerned with retaining buildings that represent the past, the very need to do so is a function of modernization.

Just like twenty-first century urban dwellers, Viollet-le-Duc lived in a period of enormous change in the city where he lived: Paris. Starting in the 1850s, a massive campaign of rebuilding—called “Haussmannization” for its principal architect, the Baron Georges-Eugène Haussmann (1809-1891)—entailed the demolition of great swaths of the city’s ancient fabric, and the construction of new broad avenues, grand apartment blocks, and splendid monuments like the Paris Opéra. Today’s urbanites would find familiar some of the regrettable consequences of Haussmannization, such as a sort of gentrification in which working-class residents of the city center were displaced to its periphery. Viollet-le-Duc wasn’t explicitly criticizing urban modernization in his writing, but he did effectively connect two apparently distinctive phenomena: the expansion and reconfiguration of built landscapes (which took place throughout Europe and North America in the nineteenth century) and increasing public and private support for preserving or even reconstructing historic buildings.

Viollet-le-Duc’s concept of restoration, as expressed in his dictionary and elsewhere, had an enormous impact on the restoration of Notre-Dame which he undertook in collaboration with architect Jean-Baptiste Lassus (1807-1857) in the 1840s. Unlike today’s restorers who would try to bring back a building as much as possible to its original appearance, or to the way it was documented as having looked later on, Viollet-le-Duc believed that restoring a work of architecture meant giving it an imagined completeness which may never have existed.

Thus, the Cathedral of Notre-Dame, which had never had spires atop the two towers of its façade, Viollet-le-Duc at one point imagined with those elements reconstructed, and the demolished tower that had risen over a point above the main altar, rebuilt. He never carried out that ambitious project, but he did rebuild the one destroyed spire which was completed just before 1860. In the absence of much documentation of the original spire, Viollet-le-Duc’s version was a creative design.  It paid homage to the great importance attached to the spire which soared above the cityscape to mark the location of the cathedral of Paris.

When the burning spire crashed to the roof below in April 2019, it ignited a debate about whether it should be replaced and, if so, with what?  Many observers believe that Viollet-le-Duc’s spire—the result of the cathedral’s nineteenth-century restoration—should be reconstructed. The fervency of the calls for Notre-Dame’s restoration underscore how important older buildings and environments still seem, even as cities grow and transform.

Kevin D. Murphy is the Andrew W. Mellon Chair in the Humanities and Professor and Chair of History of Art at Vanderbilt University. Murphy is also the editor-in-chief of the new Oxford Bibliographies module, Architecture, Planning, and Preservation.

The unexpected role of nature at Amiens Cathedral [slideshow]