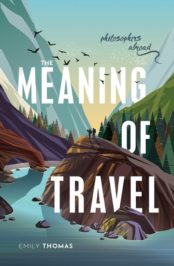 The Meaning of Travel

René Descartes argued that each of us is, fundamentally, a thinking thing. Thought is our defining activity, setting us aside from animals, trees, rocks. I suspect this has helped market philosophy as the life of the mind, conjuring up philosophers lost in reverie, snuggled in armchairs. But human beings do not, in fact, live purely in the mind. Other philosophers have recognised this, and connected our inner lives with an everyday, bodily process: walking. The act of putting one foot in front of another creates rhythm, movement, and can elevate the spirit. From teaching to reflecting, here are some suggestions for your next stroll.

Aristotle was named a peripatetic, one who paces, for his habit of strolling up and down whilst teaching. For Aristotle, walking facilitates talking – and, presumably, thinking. Although Aristotle’s walking was famous, he was not the first philosopher to have the habit. Socrates was delighted at how students trailed after their teacher, as reported in Plato’s Protagoras: “I saw how beautifully they took care never to get in Protagoras’ way. When he turned around with his flanking groups, the audience to the rear would split into two in a very orderly way and then circle around to either side and form up again behind him. It was quite lovely.” Comedy writers of the time also made fun of Plato for tiring out his legs whilst working out “wise plans.”

2. Jean-Jacques Rousseau: Examine everything in your own time.

For Rousseau, the great benefit of walking is that you can move at your own time, doing as much or as little as you choose. You can see the country you’re travelling through, turn off to the right or left if you fancy, examine anything which interests you. In Emile, he writes: “To travel on foot is to travel in the fashion of Thales, Plato, and Pythagoras. I find it hard to understand how a philosopher can bring himself to travel in any other way; how he can tear himself from the study of the wealth which lies before his eyes and beneath his feet.” He adds that those who ride in well-padded carriages are always “gloomy, fault-finding, or sick,” whilst walkers are “always merry, light-hearted, and delighted with everything.”

3. Henry Thoreau: Allow nature to work on you.

Thoreau argues that humans are a part of nature, and walking through nature can allow us to grow spiritually. He argues that being in the wild can act on us, that mountain air can feed our spirits. In his article, “Walking,” he advises us to focus: “I am alarmed when it happens that I have walked a mile into the woods bodily, without getting there in spirit… What business have I in the woods, if I am thinking of something out of the woods?” To feel the benefits of walking through nature, we must allow it to enter us, to soak it up.

4. George Santayana: Reflect on the privilege of movement.

Santayana points out that plants cannot move, whilst animals can. In “The Philosophy of Travel”, he wonders if this privilege of “locomotion” is the “key to intelligence”, writing: “The roots of vegetables (which Aristotle says are their mouths) attach them fatally to the ground, and they are condemned like leeches to suck up whatever sustenance may flow to them at the particular spot where they happen to be stuck. Close by, perhaps, there may be a richer soil or a more sheltered or sunnier nook but they cannot migrate, nor have even the eyes or imagination by which to picture the enviable neighbouring lot.” Moving around allows animals to experience more of the world, to imagine how it might be elsewhere.

Gros has done more than any other philosopher to advance the philosophy of walking, although according to this amusing interview he does not walk enough. He maintains we should walk alone, preferably through nature. Once you’ve left populated streets, roads, and public spaces behind, you leave their noises behind. No more speed, jostling, clamour, clattering footsteps, white noise murmurs, snatches of words, rumbling engines. As he notes in “A Philosophy of Walking,” gradually, you retrieve silence: “All is calm, expectant and at rest. You are out of the world’s chatter, its corridor echoes, its muttering. Walking: it hits you at first like an immense breathing in the ears. You feel the silence as if it were a great fresh wind blowing away clouds.” The silence gathered by walking is refreshing, restorative.

Throughout the ages, and for different reasons, we have been encouraged (sometimes urged!) to step outside and explore the world by foot. Whether to clear our heads, to gain new perspective, or simply to absorb the wonders of nature, perhaps there is something for everyone to gain by slipping on a pair of shoes and venturing forth into the great beyond.

Emily Thomas is an associate professor in philosophy at Durham University.