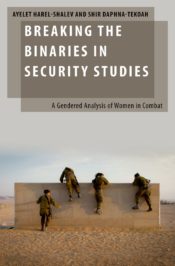 Breaking the Binaries in Security Studies

The 1990s saw women beginning to fill a wider range of roles in the military, with many countries relaxing their bans on women serving in combat roles. As a result, women are able to fly combat aircraft, serve in artillery units, staff missile emplacements, serve as combat medics, and fill various other roles that involve potential combat exposure. Additionally, many more women are assigned to combat-support roles located on the front line. Yet most research on women involved in military life still concerns itself with the wives of enlisted men, women in civilian posts within the military, women that were sexually assaulted in the military, or women in non-combat-related military service. It is thus patently obvious that women combatants and veterans who fulfill assignments in conflict zones deserve closer attention.

There is still severe opposition to integration of women into combat roles. The presence of female bodies in the military is often seen as a potential threat to team cohesion and combat effectiveness. In fact, women’s struggle for equal participation in the military is often criticized, even by feminist activists. Many scholars hold the view that the struggle for equality in the military has negative side effects, including possibilities of reinforcing militarism, of encouraging the militarization of women’s lives, and even of bringing about legitimization of the use of force. Yet, irrespective of these debates, since women are currently serving in a variety of combat roles and combat-support positions in many countries, there is much for us to learn about the gendered elements of military service.

Conversations with women veterans reveal multiple levels of oppressions and various difficulties for women in combat – the women often reflect about what it means to be a woman in the military and what it means to be feminine in the military. Tal, a former combatant in the Israel Defense Forces, described the process that she went through like this: “After the entire process of combat training, I became a man. [As a combatant] I am not a strong woman, but a kind of a weak man.”

Noa, for example, reflected on the complex nature of femininity and masculinity in the military as she understood it:

How can I be feminine here [in the military service]? If I look like a man, behave like a man, and crawl like a man – then am I a woman? So, you notice an effort: when they go home for the weekend, some [women combat soldiers] put on earrings and make-up to … as if it was a feminine experience. I want to develop a different perception of what it means to be feminine. To be feminine doesn’t necessarily mean to be gentle or to wear make-up. To be feminine for me is to be strong, to be protective, to be supportive of others. Maybe this is what feminine means? So I give it [femininity] a different meaning.

Noa’s view contrasts with Tal’s comment above to the effect that in the army she became “a weak man” rather than “a strong woman.” Tal’s view echoes the theoretical debate and body of knowledge about gender, which presume that to act like a soldier is not to be womanly. The women soldiers grapple with the question of their gendered identity as combatants. They displayed different and often ambivalent attitudes towards the question of how they ought to have behaved as women in the military.

While each women has a particular interpretation of the role she ought to have assumed as a combatant, they all acknowledged that the system demanded that they become more masculine. Most expressed a certain tension between the desire to meet this expectation, on the one hand, and a resistance to it, on the other. Women in the military are confronted with both formal structural barriers and non-formal barriers in the form of various exclusion mechanisms that are difficult to expose and change.

The ex-combatants admit that they encounter a double standard in the military and later in civilian life: when a woman is assertive, authoritative and determined, she is considered mean and spiteful rather than, say, an effective commander or manager, whereas a man who exhibits the same qualities is perceived as competent. What, then, is the “proper” way to be a woman combatant?

Ma’ayan, a commander in a combat unit, sums up this discussion and expressed resistance to the fact that women combatants are essentially expected to act like men:

The most confusing thing in combat service in the military is that in the name of feminism you become a man and act according to masculine rules. Instead of inserting feminine rules that are meaningful and equally good, your rebellion [in becoming a combatant] eventually consists of transforming into more of a man than a woman… The common knowledge is that in order to be a good combatant you have to act as a man …. What does it mean to be a woman combatant? …. To be a good combat commander [as things stand], I need to be less sensitive and complex; I need to understand and adopt masculine codes; to be stronger. What we understand [in this role] is that in order to be equal, we [women combatants] need to behave like men.

The women veterans’ experiences in the military exemplify the complexity of the perspectives that inform their diverse securities and insecurities. Their testimonies illuminate aspects that are often absent from dominant narratives of war and combat service. Attending to these narratives can contribute significantly to forming alternative discourses on war and security.

Ayelet Harel-Shalev is a political scientist. She is Associate Professor at the Conflict Management and Resolution Program and The Department of Politics and Government, Ben-Gurion University of the Negev. Harel-Shalev is the author of The Challenge of Sustaining Democracy in Deeply Divided Societies and co-editor (with Arthur A. Stein) of Affect, Interest, and Political Entrepreneurs in Ethnic and Religious Conflicts.

Shir Daphna-Tekoah is a senior lecturer in the School of Social Work of the Ashkelon Academic College, Ashkelon, Israel, and the Head of the Social Work Department, Kaplan Medical Center, Rehovot, Israel. Her academic interests include Gender, Health and Violence, Women Combatants, Child Abuse and Neglect, and Dissociation and Trauma.