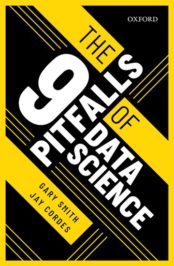 The 9 Pitfalls of Data Science

If humans are no longer worthy opponents, then perhaps computers have moved so far beyond our intelligence that we should rely on their superior intelligence to make our important decisions. Nope.

Despite their freakish skill at board games, computer algorithms do not possess anything resembling human wisdom, common sense, or critical thinking. Deciding whether to accept a job offer, sell a stock, or buy a house is very different from recognizing that moving a bishop three spaces will checkmate an opponent. That is why it is perilous to trust computer programs we don’t understand to make decisions for us.

Consider the challenges identified by Stanford computer science professor Terry Winograd, which have come to be known as Winograd schemas. For example, what does the word “it” refer to in this sentence?

I can’t cut that tree down with that axe; it is too [thick/small].

Paraphrasing Oren Etzioni, CEO of the Allen Institute for Artificial Intelligence, how can machines take over the world when they can’t even figure out what “it” refers to in a simple sentence?

When we see a tree, we know it is a tree. We might compare it to other trees and think about the similarities and differences between fruit trees and maple trees. We might recollect the smells wafting from some trees. We would not be surprised to see a squirrel run up a pine or a bird fly out of a dogwood. We might remember planting a tree and watching it grow year by year. We might remember cutting down a tree or watching a tree being cut down.

A computer does none of this. It can spellcheck the word “tree,” count the number of times the word is used in a story, and retrieve sentences that contain the word. But computers do not understand what trees are in any relevant sense. They are like Nigel Richards,who memorized the French Scrabble dictionary and has won the French-language Scrabble World Championship twice, even though he doesn’t know the meaning of the French words he spells.

To demonstrate the dangers of relying on computer algorithms to make real-world decisions, consider an investigation of risk factors for fatal heart attacks.

I made up some household spending data for 1,000 imaginary people, of whom half had suffered heart attacks and half had not. For each such person, I used a random number generator to create fictitious data in 100 spending categories. These data were entirely random. There were no real people, no real spending, and no real heart attacks. It was just a bunch of random numbers. But the thing about random numbers is that coincidental patterns inevitably appear.

In the same way, some coincidental patterns were bound to turn up in my random spending numbers. As it turned out, by luck alone, the imaginary people who had not suffered heart attacks “spent” more money on small appliances and also on household paper products.

When we see these results, we should scoff and recognize that the patterns are meaningless coincidences. How could small appliances and household paper products prevent heart attacks?

A computer, by contrast, would take the results seriously because a computer has no idea what heart attacks, small appliances, and household paper products are. If the computer algorithm is hidden inside a black box, where we do not know how the result was attained, we would not have an opportunity to scoff.

Nonetheless, businesses and governments all over the world nowadays trust computers to make decisions based on coincidental statistical patterns just like these. One company, for example, decided that it would make more online sales if it changed the background color of the web page shown to British customers from blue to teal. Why? Because they tried several different colors in nearly 100 countries. Any given color was certain to fare better in some country than in others even if random numbers were analyzed instead of sales numbers. The change was made and sales went down.

Many marketing decisions, medical diagnoses, and stock trades are now done via computers. Loan applications and job applications are evaluated by computers. Election campaigns are run by computers, including Hillary Clinton’s disastrous 2016 presidential campaign.If the algorithms are hidden inside black boxes, with no human supervision, then it is up to the computers to decide whether the discovered patterns make sense and they are utterly incapable of doing so because they do not understand anything about the real world.

Gary Smith is the Fletcher Jones Professor of Economics at Pomona College. He received his Ph.D. in economics from Yale University and was an assistant professor there for seven years. He has won two teaching awards and written (or co-authored) more than 80 academic papers and twelve books.  His research has been featured by Bloomberg Radio Network, CNBC, The Brian Lehrer Show, Forbes, The New York Times, Wall Street Journal, Motley Fool, Newsweek, and BusinessWeek.