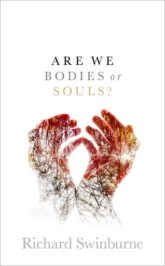 Are We Bodies or Souls?

The vast majority of today’s scientists and philosophers believe that human beings are just physical objects, very complicated machines, the essential part of which is our brain which is sometimes conscious.  My belief is that on the contrary each human consists of a body which is a physical object, and a soul which is an immaterial thing, interacting with their body; it is our soul that is conscious and is the essential part of each of us.

One argument for this comes from the structure of our brains. Our brains consist of a left and a right cerebral hemisphere and a cerebellum. Our conscious lives depend on the operation of the upper part of each cerebral hemisphere, the cerebral cortex. Occasionally patients with severe epilepsy originating in one hemisphere have that hemisphere removed. It is a recent neuroscientific discovery that, whether surgeons remove the left hemisphere or the right hemisphere, the patient thinks and behaves in much the same way as before (except for not having epileptic fits), at least in the respect that his memories remain largely the same and his character is not very different.

Surgeons are now just beginning to be able to reconnect severed spinal nerves, and they are on the way to being able to connect a severed spinal nerve to a new nerve obtained from elsewhere. The nerves which connect brain parts with other brain parts are nerves of the same kind as spinal nerves. Hence it should become possible for surgeons to remove one hemisphere by severing the nerves which connect it to the rest of the brain and join the severed nerves to another brain.

Now suppose that both hemispheres are removed from a person whom I will call Alexandra and also from two other persons, Alex and Sandra. Alexandra’s left hemisphere is then connected to Alex’s brain, and Alexandra’s right hemisphere is connected to Sandra’s brain. Then both of two subsequent persons would claim to be Alexandra, since their one cerebral hemisphere obtained from Alexandra would provide them with Alexandra’s memories and character. Each of them would have equal claims to be Alexandra, and there would seem to be no possible subsequent experiment which could show which (if either) of them was Alexandra. Now consider one such person, for example the person who has Alex’s body. It is logically compatible with everything we could possibly discover about her body and brain, her memories and character that she is Alexandra; and logically compatible with everything we could possibly discover that she is not Alexandra. So there must be something else about her which we are not able to observe which would make her Alexandra – if she is Alexandra; and the absence of which would make her not Alexandra.

Richard Swinburne was professor of the philosophy of the Christian religion at the University of Oxford from 1985 until 2002. Since then he has continued to lecture in many different countries. His published works include a trilogy on the philosophy of theism, the central title being The Existence of God, Second Edition (Oxford 2004), a tetralology of books on the meaning and justification of central Christian doctrines, and Mind, Brain, and Free Will (Oxford 2013). He is a fellow of the British Academy.