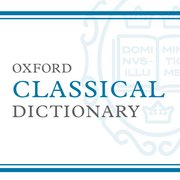 For more than half a century one of the preeminent print reference works on the Greco-Roman world, and now available in a continuously updated and ever-expanding online version that ensures the scholarship remains current and reflective of emerging subfields and perspectives. The digital edition goes beyond the unparalleled coverage of the print volume and features more in-depth thematic entries, extensive bibliographies, and images, maps, links, and audiovisual clips.

However, in 1814, an archaeologist and architectural theorist, Antoine-Chrysostome Quatremère de Quincy, coined the term “polychromy” in relation to Greek and Roman Classical sculpture. By definition, polychromy is the art of painting in several colors, especially as applied to ancient pottery, sculpture, and architecture. Quatremère de Quincy, working off of the findings of an eighteenth-century excavation of Pompeii and Herculaneum, asserted that Classical Greek and Roman sculpture was not, in fact, monochromatic. Instead, Quatremère de Quincy claimed that these ancient sculptures once had colour that, over centuries, had faded into the recognizably colourless marble.

Despite the empirical data from which Quatremère de Quincy had drawn his claim, Classical scholars were hesitant to adapt such a theory. Quatremère de Quincy had disrupted all preconceived notions of ancient Greek and Roman sculptural aesthetics. This video explores the history and recent research advances made into the polychromy of Greek and Roman sculpture, highlighting the multi-millennia misconception.

Since 1960, there has been a change of heart amongst scholars in their attitudes towards polychromy and ancient Greek and Roman sculpture. Researchers, now working to identify the pigments and techniques utilized by these pre-anno domini sculptors, are creating imaging of what these sculptures might have looked like when they were first made. Now, researchers are saddled with a new and diametrically different dilemma from their predecessors: how much colour is too much colour?

How well do you know the US Supreme Court? [quiz]