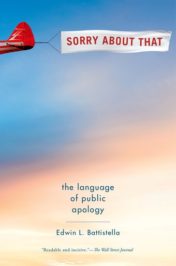 Most of us have been told at some point that a sentence has a subject and predicate and that the predicate consists of a verb and an object—the girl kicked the ball. We may have been introduced to distinctions such as transitive, intransitive, and linking verbs (like carry, snore, and become, respectively). But there is much more to the intricacies of what must follow a verb.

We explained that we would be right on time.

We tried to use a new recipe.

And some verbs (like promise) allow both noun clauses and infinitives.

We promised that we would buy eggs.

We promised to buy eggs.

General dictionaries offer clues to valency by giving example sentences.  More specialized reference works, like A. S. Hornby’s 1975 Guide to Patterns and Usage in English, delineate pretty much the full range of verbs. Hornby distinguishes more than twenty-five different ways that verbs can be completed.

To me, one of the most intriguing patterns involves the distinction between gerunds and infinitives as direct objects. Some verbs, like want, agree, arrange, claim, decide, and refuse, allow infinitives to follow but not gerunds.

We wanted to spend more time at the coast.

He agreed to visit every week.

Other verbs, like enjoy, acknowledge, admit, anticipate, and avoid, take gerunds but not infinitives.

We enjoyed visiting the museums.

She acknowledged receiving the letter.

Different verbs, different patterns. But why do certain verbs prefer gerunds but others infinitives?  Sometimes the different behavior can be linked to grammar, as when a preposition is involved. We find gerunds but not infinitives after prepositions:

She succeeded in solving the problem.

I forgot about going to the play.

On the other hand, when a verb has an indirect object, the infinitive is usually (but not always) required:

We asked her to reconsider.

He convinced them to drop the charges.

We remembered to buy eggs.

It’s not quite a perfect test, however. The contrast between infinitives and gerunds in the following examples is not apparent, the distinction between hypothetical activity and simultaneous action merging to virtual synonymy.

He loved to think about verbs.

He loved thinking about verbs.

Not all grammatical puzzles are easily solved.

The not-so ironic evolution of the term “politically correct”