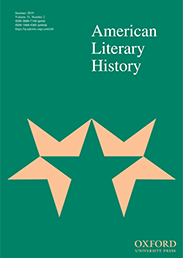 Covering the study of US literature from its origins through the present, American Literary History provides a much-needed forum for the various, often competing voices of contemporary literary inquiry.

The arrival of a new child destroys a household’s ordinary sense of time. At least, it did for us. When our first son was born last fall, two leading scholars had just published books that each, in their own way, describe how contemporary US fiction has been shaped by the dramatic rise of human rights in global politics since the 1970s. Despite their many differences, both these books—James Dawes’ The Novel of Human Rights (2018) and Crystal Parikh’s Writing Human Rights (2017)—argue that new kinds of stories will matter to the future of human rights. Over the course of the fall, their ideas became entangled in my own sleep-deprived mind with two other developments: first, the arrival of our first child in November; and, second, the ongoing fallout from the US government’s family separation policies at the US-Mexico border.

In the introduction to The Novel of Human Rights, Dawes writes, “In the United States, we are, for the first time, living in a popular culture of human rights.” I read Dawes’ introduction around the same time that I came across an op-ed written by Michael Bochenek, the senior counsel of the Children’s Rights Division at Human Rights Watch, titled “The US Detention of Children Is Only Getting Worse.” The op-ed was accompanied by a satellite image of a detention camp for migrant children in Tornillo, Texas. Dawes’ account of the rise of a new US literature of human rights was published on 12 September 2018. The satellite image was taken just a day later.

As I was writing about the new US literature of human rights, events soon overtook me as well. By January of this year, the children detained at Tornillo had all been transferred elsewhere. In April, Kirstjen Nielsen, the secretary of homeland security, resigned over disagreements with the Trump administration. There were rumors that family separation would soon resume. (A recent Congressional oversight report suggested that, in fact, hundreds of separations have occurred in the year since the courts ordered that the practice stop in summer of 2018.) In late August, the Trump administration unveiled a new policy that, barring a successful legal challenge, would override the so-called “Flores Settlement,” abolishing time limits on how long migrant children can be locked in detention centers.

All of which raises a troubling question for our field: Has the US literature of human rights arrived too late? Perhaps this is an unfair, or even vulgar, question. After all, what can any work of literature—or scholarship, for that matter—be expected to do in a period of escalating refugee crises. Parikh closed Writing Human Rights with a discussion of the UN Convention on the Rights of the Child and the surge of undocumented children arriving at the US-Mexico border in 2014. Both she and Dawes described how contemporary US novels often address the problem of the “lost child” by imagining new forms of kinship beyond the traditional family as well as beyond the nation-state. They also pointed out that the Convention on the Rights of the Child  has been adopted by every country in the world except the United States. Elsewhere in her book, Parikh conceded, “I certainly do not want to overstate the transformative capacities of cultural politics in the face of immense forces of state power and social violence.”

But a turn toward the literary past might help us imagine a different kind of future, a counter-politics, for human rights. Lyndsey Stonebridge’s Placeless People: Writing, Rights, and Refugees, the subject of a recent online symposium, is an example of what this new literary history of human rights might look like. But, again, are we already too late?

“Humanities scholars are great at critique and history,” the literary scholar Stephanie DeGooyer recently tweeted, “going beyond to policy and ‘solution’ is a major disciplinary jump.” An editor of The Right to Have Rights and author of a recent essay about birthright citizenship, DeGooyer is another great example to follow. Not only do literary scholars need to continue working across disciplinary boundaries to reach new audiences, but we also need to learn how to think, write, and act across different scales of time. Academic research, much like the new US literature of human rights, moves slowly through the world. Meanwhile, as Parikh pointed out near the end of Writing Human Rights, “the vulnerable, desirous, unpredictable, demanding child arrives in her own right, on a future terrain of community that unfolds in its own time and space.” And their arrival is only the beginning.

Brian Goodman is an assistant professor in the department of English at Arizona State University, where he is also an affiliate faculty member of the Center for Jewish Studies and the Melikian Center for Russian, Eurasian, and East European Studies. Before coming to ASU, Goodman was a postdoctoral instructor at the Pozen Family Center for Human Rights at the University of Chicago. His current book project (under contract at Harvard University Press) explores the relationship between literature, dissent, and human rights in the United States and Czechoslovakia during the Cold War. His past writing has appeared in American Literary History, Public Books, and the Los Angeles Review of Books.